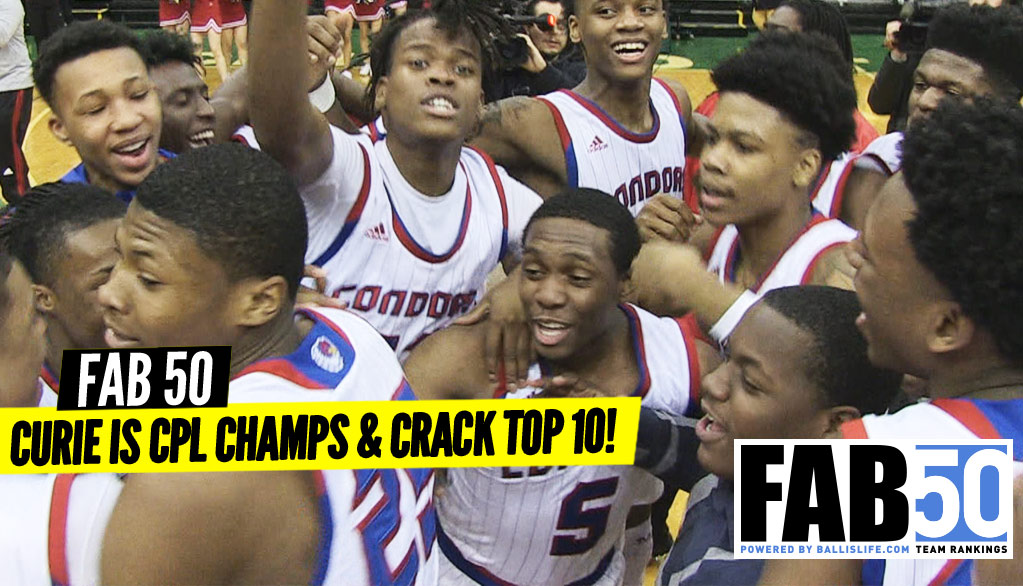 Plenty of movement in the latest FAB 50 National Rankings powered by Ballislife.com as some top-ranked teams are upset while teams with quality wins go back in front of ranked teams they beat earlier in the season. The opponents will get tougher from here on out and we already have one team that has been ranked done for the year. Six newcomers this week led by Teays Valley Christian Prep (Scott Depot, W. Va.), which recorded a big win over FAB 50 power Oak Hill Academy (Mouth of Wilson, Va.).

Although every single result we for over every week can’t be based on a team “A” beating team “B” therefore team “A” is ranked higher scenario, every result is important and will eventually come into play for teams in the FAB 50 National Team Rankings powered by Ballislife.com that play a tough schedule.

Many ranked teams that don’t play for a state championship are angling for a spot in GEICO Nationals (April 4-6, in New York City), so it was big news when then No. 16 Oak Hill Academy (Mouth of Wilson, Va.) was upset by unranked Teays Valley Christian Prep (Scott Depot, W. Va.), 80-72, at the FCA Prep Showcase in Virginia. Teays Valley Prep was led to victory by big man Anderson Mirambeaux with 20 points, while David Jones (18 points) and Luis Herrera (17 points) also had big games. Coach Ryan Arrowood’s club was able to hold off the Warriors despite 28 points from undecided point guard Cole Anthony, who tied center Evan Mobley of No. 24 Rancho Christian (Temecula, Calif.) for the lead in the latest Mr. Basketball USA Tracker, which keeps tabs on the top candidate for national player of the year.

Oak Hill is looking to earn one of the bottom seeds in the eight-team field, which has it deepest pool of candidates ever. The Warriors drop four spots this week, as their other three losses are all to teams ranked higher, including a 72-67 setback to No. 4 IMG Academy (Bradenton, Fla.) in which Anthony did not play. Oak Hill gets rankings credit for its win over No. 44 Olive Branch (Olive Branch, Miss.), which owns a win over No. 21 Paul VI (Fairfax, Va.) but has a few too many losses to be ranked as high.

As for Teays Valley, it makes its FAB 50 debut at No. 37 and gets rankings credit for its other big victory this season, a 73-68 win over No. 38 Hamilton Heights Christian Academy (Chattanooga, Tenn.). Both of the losses for Arrowood’s club, one to Huntington Prep (Huntington, W. Va.) and the other to Legacy Early College (Greenville, S.C.), comes against teams it will rematch before the end of the regular season.

The top four seeds in GEICO Nationals should go to the top four ranked teams in the FAB 50, provided No. 2 McEachern (Power Springs, Ga.) captures the GHSA Class AAAAAAA crown. The Indians opened the state tournament with a 89-54 victory over East Coweta (East Coweta, Ga.), a team that was FAB 50 ranked at one point this season. Junior point guard and spark plug Sharife Cooper led the way for McEachern with 42 points. There is tremendous buildup for the Indians to win the state crown and accept a GEICO Nationals bid after rising to No. 4 last season before falling in the state quarterfinals. The field will still be strong should McEachern falter, but fans of the national scene would love to see the Indians and top-ranked La Lumiere (La Porte, Ind.) in the same tournament field.

The top-ranked Lakers have at least two more regular season games left, while No. 3 Montverde Academy (Montverde, Fla.) and No. 4 IMG Academy are now done for the regular season.

As for Cooper, his team’s success and his own individual brilliance (28 ppg, 6.0 rpg, 9.2 apg, 4 spg, 50-40-90 shooting) is starting to put him in serious national player of the year conversation despite his underclass status. Cooper appeared on only one of ten preseason ballots in the Mr. Basketball USA Tracker, but in the latest go-around appeared on five ballots, including three that have the dynamic point guard as the third best player in the country.

Will Cooper gets to lead his team against the nation’s best at GEICO Nationals?