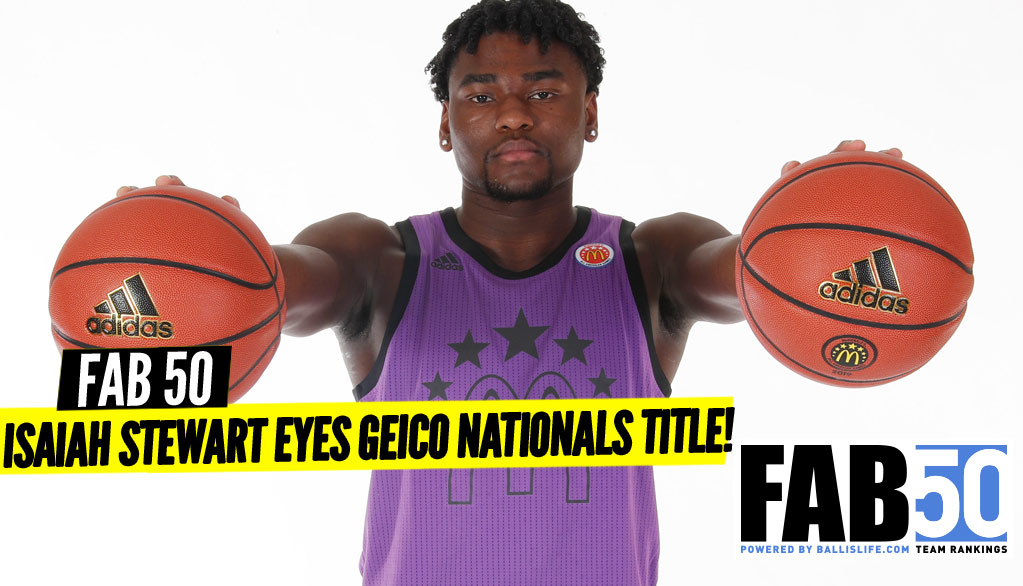 Only eight teams are still playing and all will be in New York City for GEICO Nationals, April 4-6 on the ESPN family of networks. Top seeded and FAB 50 No. 1 La Lumiere (Ind.) has a tough first game and there is no easy matchup for the higher seeds. We take a look at the keys to victory in each game and some likely scenarios.

Only eight teams are still playing and all of them will be in New York City for GEICO Nationals, April 4-6 on the ESPN family of networks. Top seeded and FAB 50 No. 1 La Lumiere (La Porte, Ind.) has a tough opening round game and there is no easy matchup for the higher seeds in the eight-man tournament. We take a look at the keys to victory in each game and some likely scenarios.

There is a solid chance the 2018-19 FAB 50 mythical national champion will emerge from the GEICO Nationals taking place at Christ the King (Middle Village, N.Y.). All eight teams are ranked within the Top 25 of this week’s rankings and there is simply no easy out in the eight-team field.

Below is the television schedule for GEICO Nationals

GEICO Nationals Synopsis: With the event taking place one week later than it has it past years, no player on any of the rosters will be scrambling to get from the McDonald’s All-American Game to New York. In the past that has affected the game play of a few key players. The teams with McDonald’s players on its roster will be locked in and ready to go if the play of the McDonald’s All-Americans are any indication (Cole Anthony of Oak Hill Academy, Isaiah Stewart of La Lumiere, Precious Achiuwa of Montverde Academy, etc.).

Top seed La Lumiere obviously has an big advantage up front with the Washington-bound Stewart, a Mr. Basketball USA candidate, Kentunky-bound Keion Brooks, and Pittsburgh-bound Gerald Drumgoole, but the key will be slowing down sophomore guard Zaon Collins, the players that makes the Gaels go. Look for the Collins matchup with Wendell Green to be one of the keys to the game. If the Lakers can keep Collins in check, they will be in great position to advance to the semifinals. They would take on the winner of Oak Hill Academy-Wasatch Academy, two teams that don’t think they have showed the country exactly what they can do just yet.

Coach Steve Smith feels his team could be hitting its stride now that Anthony, the leading Mr. Basketball USA candidate, is healthy. Oak Hill only lost one game at full strength and has the pieces to play competitively with La Lumiere. Wasatch Academy, meanwhile, knows it can play with La Lumiere having lost to the Lakers by a point (53-52) after leading 52-49 and with possession of the ball. La Lumiere was able to pull out the win behind clutch free throws by Brooks and Drumgoole and a huge rebounding advantage. La Lumiere held a 52-34 rebound advantage in that game, according to the Cumberland Times-News, so if the Oak Hill Academy-Wasatch Academy winner gets out-rebounded by a sizable margin, it will have trouble winning should the opponent be La Lumiere.

Wasatch Academy was unbeaten heading into the Montverde Academy Invitational and was battling illness to some key players on the late January trip. Wasatch Academy feels its performance in that event (blowout loss to FAB 50 No. 39 Rancho Christian and loss to No. 27 Vashon) is not indicative of how it can play in this event. Last year coach David Evans nearly led Lone Peak (Utah) to an upset win over eventual champion Montverde Academy in the first round and will have an excellent game plan for Oak Hill. Wasatch will have to keep Anthony or junior shooting guard Cam Thomas relatively contained. If both have big offensive nights, it could be a long night for Wasatch.

On the other side of the bracket, Sunrise Christian Academy has played many tough opponents with mixed results. Coach Luke Barnwell’s club took FAB 50 No. 2 McEachern (Powder Springs, Ga.) to the brink, but lost by wide margins to Montverde Academy (68-41) and to La Lumiere (74-52). Sunrise Christian can play with IMG, but must be on its A-Game to pull out the victory because the Ascenders are extremely motivated. IMG came into the event with a talented team in 2017 and were upset by a Greensboro Day (Greensboro, N.C.) team it felt it should have beat and are taking the opportunity to play in New York as a serious business trip. IMG is going to want to keep big man N’Faly Dante from going off (as opposing big men have given them some trouble), so one of the perimeter players such as Grant Sherfield will have a big opportunity to step up for the Buffaloes.

Most high school basketball followers would expect to see a IMG Academy-Monteverde Academy semifinal matchup, but last year University School displayed the ability to step up in big games and this is actually a rematch of last year’s championship game won by Montverde Academy. University School hasn’t played to the level it did last year (it has lost to both IMG Academy and Sunrise Christian Academy), but the Sharks won’t be intimidated. Their guard play will be key because the defending champions will be primed to slow down Duke-bound big man Vernon Carey Jr. He was completely dominant last year at the event in victories over Shadow Mountain (Ariz.) and Oak Hill Academy, before going 5-of-16 for 12 points in the title game loss. All eyes will be on his health, as Carey has been nursing an ankle injury and did not play in the McDonald’s All-American Game last Wednesday. If he is not healthy or can’t move well against Monteverde’s stifling defense, University School will have a hard time in this game. Montverde Academy’s overall team defense is so good this season, somebody is likely going to have to get extremely hot from the outside for the Sharks to have a chance at the upset.

The one toss-up game could be a IMG-Montverde Academy semifinal, as La Lumiere comes into the event as the slight overall favorite. The No. 1 ranked team in the FAB 50 has already beaten Montverde Academy twice, but should IMG come out firing on all cylinders in the first game, perhaps it would just as tough a championship foe for the Lakers since they have less familiarity with IMG’s personnel than Monteverde’s. Should the higher seeds advance, the talent level on the floor for the two semifinals will be as high as it gets at the high school level. GEICO Nationals will come down to rebounding advantage, timely free throws and the health of a couple of key star players.

We’ll break down how the actual games affect final FAB 50 positioning as the results come in during the event.