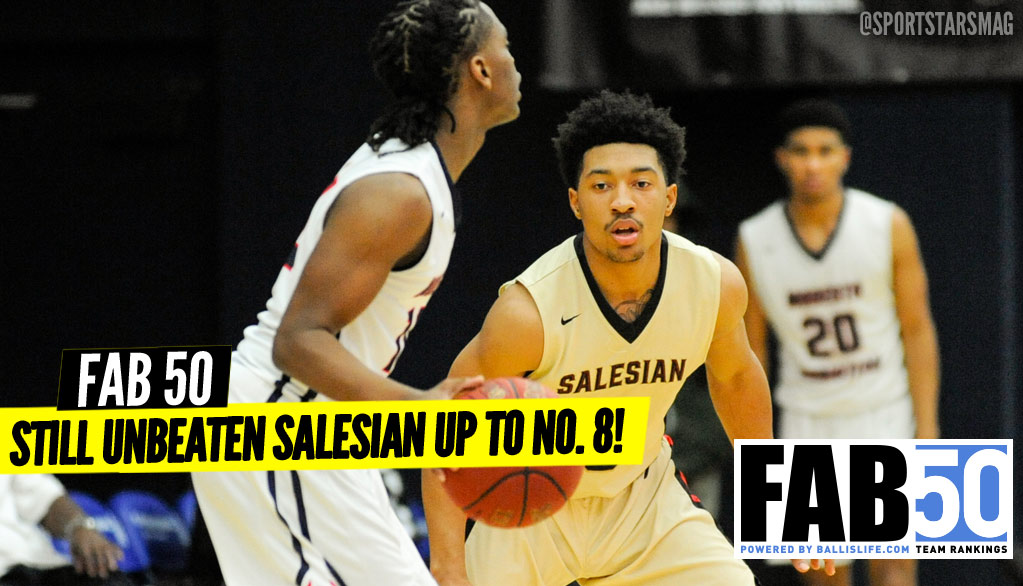 Unbeaten teams continue to get a major push upward in the FAB 50 Rankings, none more than 27-0 Salesian (Richmond, Calif.), who is ranked No. 1 in California for the first time in school history and is up to No. 8 in the FAB 50 this week.

Unbeaten teams continue to get a major push upward in the FAB 50 National Rankings powered by Ballislife.com, none more than 27-0 Salesian (Richmond, Calif.), who is ranked No. 1 in California for the first time in school history and is up to No. 8 in the FAB 50 this week. Wasatch Academy (Mt. Pleasant, Utah) makes a strong push for a GEICO Nationals berth after a big win over previous No. 6 Sunrise Christian Academy (Bel Aire, Kan.), while it looks like traditional FAB 50 power Findlay Prep (Henderson, Nev.) will miss the event for the first time in the event’s 10-year history after dropping out of the rankings this week.

The playoffs are kicking off around the country, so after the early rounds when the top seeds often easily advance, the competition gets tougher and the chance to move up, or tumble down, in the FAB 50 National Team Rankings powered by Ballislife.com becomes a greater possibility. Those opportunities (and land-mines) are clearly reflected in this week’s rankings, as we continue to reward still unbeaten teams and don’t overly punish those that play national schedules during the regular season.

Unbeaten teams making major moves up this week include No. 8 Salesian (Richmond, Calif.), No. 13 Moeller (Cincinnati, Ohio) and No. 29 Millbrook (Raleigh, N.C.). Salesian was able to move up eight spots this week because previous Cal-Hi Sports No. 1 Rancho Christian (Temecula, Calif.) was stunned, 54-50, in its pool play opener in the CIF Southern Section Open playoffs by unranked Bishop Montgomery (Torrance, Calif.).

Salesian is not only unbeaten, its victory over Illinois No. 1 Curie (Chicago, Ill.) continues to loom big because the Condors have not dropped another game, as Curie moves up ten spots this week to No. 11 right in front of Sierra Canyon. Salesian also won the Chick-Fil-A Classic in South Carolina versus strong competition and defeated the Sheldon (Sacramento, Calif.) team (77-59) that earlier defeated Bishop Montgomery. The post-season competition for Salesian isn’t nearly what Rancho Christian, Sierra Canyon and Bishop Montgomery potentially face in the CIFSS Open playoffs and the SoCal regional, so should Salesian lose in the post-season, it is unlikely The Pride will drop just two spots as Rancho Christian did this week. The same holds true for Moeller and Millbrook and others that don’t play in loaded district, section or regional playoff situations. The Pride could see Sheldon once again in the NorCal open playoffs, but it will be a slow move up from its current position as the intensity and pressure grows with each passing playoff round.

Previous No. 6 Sunrise Christian Academy (Bel Aire, Kan.) is in the same boat as Rancho Christian in that it won’t fall so quickly after a loss against a tough foe. In its case, Sunrise Christian Academy faced Wasatch Academy (Mt. Pleasant, Utah) at the Heartland Hoops Classic in Grand Island, Neb., and fell 65-53 in a game Wasatch took control of from the start. We had to drop Wasatch Academy all the way down to No. 38 two weeks ago after some shaky wins against unranked foes and losses versus Rancho Christian (74-47) and No. 28 Vashon (St. Louis, Mo.). Perhaps it was an omen of things to come when Wasatch Academy took No. 1 La Lumiere (La Porte, Ind.) down to the wire two weekends ago, but with its win over Sunrise Christian (combined with Sunrise’s wins over the course of the season), coach David Evans‘ club hops back in front of Vashon and likely played itself back into GEICO Nationals slated for the end of the season in New York City.

This week there are five newcomers, including Gonzaga (Washington, D.C.) as the highest rated at No. 44. Coach Steve Turner’s club defeated No. 5 DeMatha (Hyattsville, Md.), 65-58, to hand the Stags their only loss in WCAC play so far this season. Gonzaga’s earlier win over No. 45 Bishop Gorman (Las Vegas, Nev.) also comes into play this week and the Eagles will get its second shot at No. 20 Paul VI (Fairfax, Va.) on February 12.

For the first time since it became a FAB 50 eligible program in 2008-09, Findlay Prep (Henderson, Nev.) is out of the FAB 50 and it looks like it will miss GIECO Nationals for the first time since, In 2008-09, Findlay Prep captured the tournament and FAB 50 national title. One of the teams replacing the Pilots and four lower ranked teams this week is No. 47 Carmel (Ind.). Carmel got to as high as No. 40 in the FAB 50 earlier in the season before dropping its first game and falling out. Carmel will have a big rankings opportunity on February 15 when it takes on No. 7 Warren Central (Indianapolis, Ind.) in a showdown between the Hoosier State’s top two ranked teams.