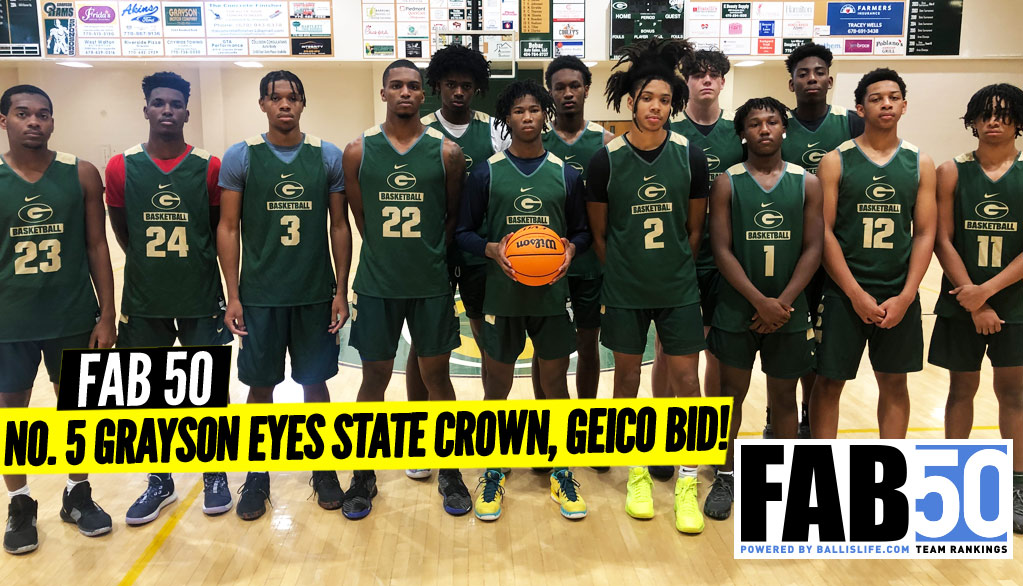 The playoffs are tipping off all over the country and some early post-season results cause big change in the latest FAB 50 rankings!. The change doesn't necessarily mean teams drop out, or can't recover and move back in after a loss that didn't end their season. One team jumps in all the way to No. 23!

The playoffs are tipping off all over the country and some early post-season results cause big change in the latest FAB 50 National Team Rankings powered by Ballislife.com. The change doesn’t necessarily mean teams drop out, or can’t recover and move back in, after a loss that didn’t end their season. There are three newcomers this week, with Richardson (Richardson, Texas) jumping up to No. 23!

RELATED: Podcast on Kobe’s Prep-To-Pro Rise & Legacy | Podcast on The Lasting Legacy of Morgan Wootten |  How Your Team Can Become FAB 50 Ranked

When the casual fan thinks “early playoff loss”, the immediate reaction is “season over” and “big rankings drop”. However, there are various playoff formats across the country and luckily for many FAB 50 ranked programs, a loss last week doesn’t mean an early end to the 2019-2020 season.

For Centennial (Corona, Calif.), it drew a tough first assignment in the eight-team CIF Southern Section open playoffs, which is formatted into two pools of four teams each, with the winner of each pool playing for the CIFSS open championship on February 28 in Long Beach, Calif. Each team plays three, pre-set games with the higher seed hosting in each game. As the No. 2 seed behind top-seeded and Sierra Canyon (Chatsworth, Calif.), which comes in at No. 17 in the latest FAB 50 National Team Rankings powered by Ballislife.com, the Huskies and Trailblazers are in separate pools and that guarantees each to be the host in all three pool play games.

Centennial had a tough opening draw with No. 7 seed Mater Dei (Santa Ana, Calif.), which actually gave Sierra Canyon its toughest competition on the way to the 2019 CIF Open Division state crown and returned its team basically intact. Mater Dei didn’t have a vintage regular season, but still won its league title and would be an awfully tough opening playoff foe for any team in the country. Mater Dei went on the road and pulled out a 66-58 overtime win, as back-to-back 3-pointers by Ryan Evans and Aidan Prukop (22 points) helped the Monarchs take control of the game after Centennial tied it with 2.8 seconds in regulation on a driving lay-up by Portland St.-bound Paris Dawson.

The overtime loss dropped Centennial out of the FAB 50 this week. It might seem like a harsh drop to Huskies’ fans, but it comes with plenty of caveats. They have to be behind Mater Dei in the current California pecking order, as well as bubble club Sheldon (Sacramento, Calif.), which beat the Huskies 74-67 during the regular season. Sheldon also beat Mater Dei in two overtimes at the Tarkanian Classic and neither of those clubs had great success against out-of-state competition, so Centennial is penalized this week.

Centennial still has to face Harvard-Westlake (North Hollywood, Calif.), a team that handed it one of its three losses, and No. 26 Rancho Christian (Temecula, Calif.) in pool play games this week. Centennial will need some help to win its pool and if Mater Dei, which plays Rancho Christian in its second pool play game on February 18, were to win the pool, it will have done enough to hop Sheldon in the Cal-Hi Sports state rankings and will likely return to the FAB 50 next week. Obviously, should Centennial go 2-1 in its pool and Mater Dei win it, that would help the Huskies as well.

In Texas, getting a local consensus is a bit more difficult, so the 81-77 loss by previous No. 19 Duncanville (Duncanville, Texas) to unranked Richardson (Richardson, Texas) was handled differently than the Centennial loss. Duncanville lost to California No. 1 Sierra Canyon by three points, beat the Whitney Young (Chicago, Ill.) club that Mater Dei lost to, and did well against out-of-state competition. Coach David Peavy’s club also owns a 70-68 overtime win over Richardson. In the Texas Association of Basketball Coaches statewide poll (TABCHoops.org), Duncanville actually remained No. 1 this week despite the loss to the Eagles, which checked in at No. 6. In the Hoopinsider.com poll, Richardson took over the top spot with Duncanville falling to No. 2.

What made most sense to us was to drop Duncanville two spots to No. 21, while rewarding Richardson for its victory. Not only did the Eagles only lose the first Region I, District 8 game by two points (70-68) in overtime, it hasn’t lost any other game since November 22. That makes Richardson the highest ranked newcomer among three teams this week at No. 23, in front of FAB 50 ranked and fellow Class 6A contender Westlake (Austin, Texas) and Class 5A front-runner Lancaster (Lancaster, Texas), which lost to Duncanville. Westlake and Lancaster drop this week as a result, but they’ll have ample opportunity to move back up in the UIL playoffs, which is traditionally one of the toughest post-season brackets to capture, especially in Class 6A.

The Georgia (GHSA) Class AAAAAAA are also tough, so we reward one loss Grayson (Loganville, Ga.) by moving it up three spots to No. 5 after previous No. 5 DeMatha Catholic (Hyattsville, Md.) lost its first game in the Washington Catholic Athletic Conference (WCAC) to No. 13 Paul VI (Fairfax, Va.). For the four WCAC teams in the FAB 50 this week, we simply followed the league standings, as the teams are most concerned with capturing the upcoming WCAC Tournament.

As for Grayson, it has one overtime loss to a Newton (Covington, Ga.) team it demolished 86-39 in a return game and just beat for a second time 82-58 in the Region 8 semifinals. Grayson defeated No. 22 Shiloh (Snellville, Ga.) in the finals, 75-64, and is the only team to defeat the Generals so far this season. Should Grayson capture the GHSA Class AAAAAAA, its season likely wouldn’t be over as it would be a strong shoo-in for GEICO Nationals April 2-4 in New York City.

Cardozo (Bayside, N.Y.) fell to High School for Construction (Queens, N.Y.), 86-69, in a puzzling Public School Athletic League (PSAL) Queens Borough quarterfinal game. The Judges had previously defeated Construction by 38 and 26 points. According to long-time Cardozo coach Ron Naclerio, his team was without two starters, Errol White and Aston Miller. Miller did not suit up and White tried to make a go of it, but was unable to participate.

As a result, the Judges drop seven spots to No. 32, as they are penalized but not harshly because they are still the top ranked team in New York City and the team to beat in the PSAL Class AA City Tournament. They don’t play again until February 27 so they have time to rest up on their injuries.

Curie (Chicago) is in a similar boat to Duncanville, as it failed to win the Chicago Public League title, but still remains ranked No. 1 locally by the Chicago Sun-Times and other polls. As a result, the Condors drop 16 spots because of their loss to eventual city champ Simeon, but not all the way out of the FAB 50.

When we get to the portion of the post-season where it’s win-or-go-home bracket style play, then we’ll see more teams harshly penalized for early exits. That’s where the opportunity lies for many bubble clubs to make a move into the longest-running weekly national rankings.

Note: The FAB 50 powered by Ballislife.com is a continuation of the National Sports News Service ratings that began in 1952. These were the first national high school rankings and the late Art Johlfs of Minnesota compiled them. They were compiled for many years by the late Barry Sollenberger of Phoenix, who merged them into the FAB 50 20 years ago. Starting with a weekly format for the 1987-88 season, the FAB 50 is the longest-running weekly national rankings.