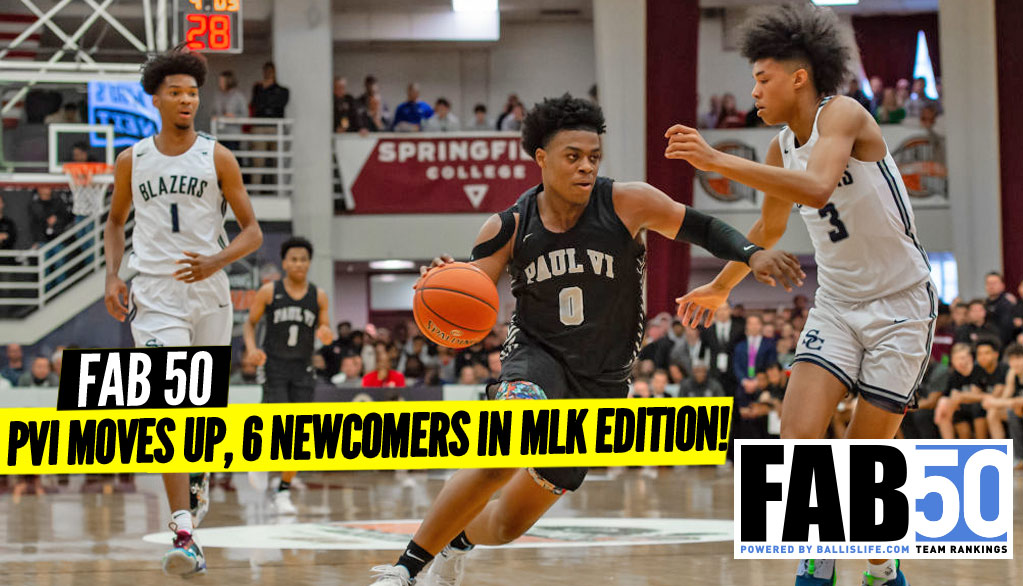 This is the week we traditionally release our FAB 50 24 hours later than normal to accommodate all the MLK showcases. When the dust settled, we have a new No. 2 team, plenty of movement and six newcomers led by No. 39 Evanston (Evanston, Ill.).

This is the week we traditionally release our FAB 50 National Team Rankings rankings powered by Ballislife.com 24 hours later than normal to accommodate all the MLK showcases across the country. When the dust settled, we have a new No. 2 team, plenty of movement because of the showcase games, and six newcomers led by No. 39 Evanston (Evanston, Ill.).

It’s always fun to take in and follow the results of showcases all across the country over the Martin Luther King Jr. holiday weekend. We hope participants, spectators and event directors don’t forget the premise of the weekend as the events unfold: to celebrate the legacy of one of the great Americans on the 20th Century.

Over the last 20 years, MLK weekend has yielded spectacular results in terms of quality competition and movement in the rankings and 2020 was no different. This week’s updated FAB 50 National Team Rankings powered by Ballislife.com shows six newcomers and a ton of movement.

The big storyline was how perennial FAB 50 power Oak Hill Academy (Mouth of Wilson, Va.) and Washington Catholic Athletic Conference power Paul VI (Fairfax, Va.) was going to handle the “Springfield Double”, which comprised of competing in the Bass Pro Tournament of Champions in Springfield, Mo. and playing in a showcase game on MLK Monday at the Spaulding Hoophall Classic in Springfield, Mass. As expected the Warriors and Panthers met in Saturday’s Bass Pro TOC championship game and Oak Hill Academy came away victorious, as LSU-bound guard Cam Thomas netted 26 points, including three 3-pointers, in a 72-57 victory. The Warriors captured their fourth tourney title and have yet to lose at the event.

The pressure was on Paul VI to rebound on Monday and Oak Hill had added incentive after previous No. 2 Hamilton Heights Christian Academy (Chattanooga, Tenn.) fell to then No. 4 Wasatch Academy (Mt. Pleasant, Utah), 94-82, in Springfield, Va., at the Kevin Durant MLK Classic. Richard Isaacs Jr., one of the top sophomore guards in the country, nailed 7-of-12 3-pointers and finished with 29 points, five assists and two steals to lead the Tigers to their big win. Coach Steve Smith’s club took care of business on its end, as it dispatched then No. 36 Bishop Gorman (Las Vegas, Nev.), 84-70, as Arkansas-bound guard K.K. Robinson made 9-of-10 shots from the field and finished with 24 points, four rebounds and two assists.

With Oak Hill owning a victory over Wasatch Academy, the Warriors naturally move up to No. 2 this week, with the Tigers coming up a spot after their big win over Hamilton Heights Christian Academy (which dropped another game on Monday to Westtown School of Pennsylvania). Coach David Evans‘ charges, however, battled Oak Hill in the Iolani Classic title game in December without the services of Michigan St.-bound Mady Sissoko. The Tigers would love to get another crack at the Warriors with a full deck lineup, and Wasatch Academy just might get that opportunity at GEICO Nationals.

As for Paul VI, it rebounded nicely from its loss to Oak Hill with a critical 70-62 victory over previous No. 16 Sierra Canyon (Chatsworth, Calif.). Paul VI’s guard duo of junior Trevor Keels and senior Jeremy Roach made the difference down the stretch. Sierra Canyon made some critical turnovers and could not overcome a big late 3-pointer by Keels, which received a scholarship offer from North Carolina on Monday. Keels finished with three 3-pointers in the game and 24 points, while the Duke-bound Roach had 16 points, seven assists and five steals.

With its win, Paul VI moved up nine spots to No. 10 despite the loss to Oak Hill. It new ranking was bolstered after fellow WCAC club DeMatha Catholic (Hyattsville, Md.) downed previous No. 25 Rancho Christian (Temecula, Calif.), which has a split with Sierra Canyon, 72-65, while unranked Bishop O’Connell (Fairfax, Va.), pulled off a 73-72 upset of previous No. 34 Mater Dei (Santa Ana, Calif.) in Springfield, Mass.

It was definitely a good MLK weekend for the WCAC and not so good of one for teams from the California Interscholastic Federation (CIF).

Top-ranked Montverde Academy (Montverde, Fla.), which beat No. 5 IMG Academy (Bradenton, Fla.) for the second time this season at Hoophall Classic, will host the 2020 Montverde Academy Invitational this week, beginning January 23. The field includes No. 11 Long Island Lutheran (Glen Head, N.Y.), No. 24 Scotlandville (Baton Rouge, La.) and La Crosse Central (La Crosse, Wis.), which is one of the six teams that fell out of the rankings this week after an upset loss. Montverde Academy will likely meet Scotlandville in Friday’s semifinal and, if the rankings hold up, Long Island Lutheran in the title game.

This Friday, No. 32 Neumann-Goretti (Philadelphia, Pa.) takes on No. 41 Archbishop Wood (Warminster, Pa.) in a Philly Catholic League showdown. After losing in its opener, Wood has only lost to Paul VI (in seven overtimes) and to Wasatch Academy.