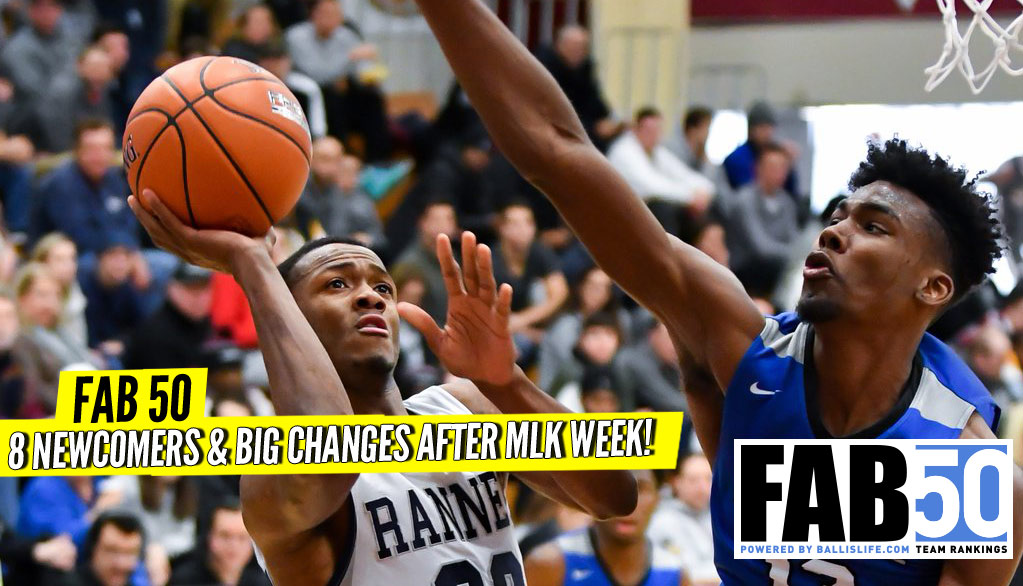 After MLK weekend, it always takes us a bit longer to get out our new FAB 50! No. 1 La Lumiere and No. 2 McEachern remain unbeaten, but MLK results from around the country meant massive changes to the rest of the field in addition to eight newcomers, the most we've had in a single week in recent memory.

After MLK weekend, it always takes us a bit longer to get out our new FAB 50 National Team Rankings powered by Ballislife.com, as a majority of the top-ranked teams play in special MLK showcases. Even when you include Monday’s big results, the top of the pecking order remains the same with La Lumiere of Indiana just ahead of McEachern of Georgia. Those two clubs remain unbeaten, but results from around the country meant massive changes to the rest of the contenders to go along with eight newcomers, which is the most we’ve had in a single week in recent memory.

Martin Luther King Jr. Weekend has turned into a hoopfest around the country, and though many events do little but attach his name or initials to its showcase, there is little doubt those events have a big impact on the FAB 50 National Team Rankings powered by Ballislife.com each MLK weekend. About 15 years ago, we started the tradition of waiting until all the MLK Monday results are in from all over the country to update our rankings that most of the other credible polls now emulate.

Despite more big games and an extra delay in compiling the weekly rankings, the two most impressive teams were the two top-ranked teams in the country. No. 1 La Lumiere (La Porte, Ind.) was in Springfield, Mass., for the Spalding Hoophall Classic where it took on previous No. 6 DeMatha Catholic (Hyattsville, Md.) on MLK Monday. The Stags hung around for a half, trailing 32-24 at the break, but the Lakers’ superior quickness to the ball and various scoring threats turned out to be the difference as La Lumiere recorded a 73-50 victory. Fast-rising junior point guard Wendell Green had 21 points and senior small forward Keion Brooks had 25 points. Even though Mr. Basketball USA candidate Isaiah Stewart didn’t have a vintage game (14 points, 11 rebounds), the Lakers have more than enough weapons that their best player doesn’t need a monster game in order to beat another top-ranked team. Stewart committed to the University of Washington of Sunday.

No. 3 Montverde Academy (Montverde, Fla.) crushed previous No. 4 Sierra Canyon (Chatsworth, Calif.), 77-58, at the Hoophall Classic in a game that wasn’t as competitive as the La Lumiere-DeMatha contest. It was the Eagles’ second victory over the Trailblazers this season, as Harlond Beverly netted 22 points. That result makes La Lumiere’s resume look even that much more impressive since the Lakers handed Montverde Academy both of its losses so far this season. In fact, La Lumiere is putting together such an impressive resume that based on all the results from around the country, DeMatha Catholic actually moved up to No. 5 this week, as its only other loss is to No. 4 IMG Academy (Bradenton, Fla.). IMG Academy defeated No. 7 Oak Hill Academy (Mouth of Wilson Va.) on Sunday, 72-67.

As impressive as La Lumiere was, the results for No. 2 McEachern were just as spectacular, as the Indians defeated then No. 19 Rancho Christian (Temecula, Calif.), 66-55, behind 27 points from spectacular junior point guard Sharife Cooper on Monday in Massachusetts. McEachern actually defeated three FAB 50-ranked foes in four days, as it captured the Bass Pro Tournament of Champions in Springfield, Mo., on Saturday night with a 50-46 overtime victory over No. 6 Sunrise Christian Academy (Bel Aire, Kan.). Cooper was named tourney MVP after scoring 20 points in the championship game, while Auburn-bound Isaac Okoro chipped in 13 points, 10 rebounds, and four assists. In the bass Pro TOC semifinals, the Indians downed No. 17 Shadow Mountain (Phoenix, Ariz.), 73-61, as Cooper went for 31 points, seven rebounds, and three assists.

Shadow Mountain remained it the same rankings position this week, as it defeated previous No. 18 Paul VI (Fairfax, Va.), 45-41, on MLK Monday in Springfield, Mass. Memphis East (Memphis, Tenn.) rebounded from its Bass Pro semifinal loss to Sunrise Christian Academy to easily down Shadow Mountain in the third place game, 74-53. That caused Rancho Christian to move up four spots this week because the Eagles own a win over Memphis East. The big win for Shadow Mountain was its 74-57 first round TOC victory over previous No. 9 Belleville West (Belleville, Ill.), which fell to No. 20. Memphis East takes on No. 12 Mountain Brook (Mountain Brook, Ala.) this weekend at the Hot Bed Classic in Mississippi.

While some of the teams that attended the Hoophall Classic had trouble getting into and leaving New England, Rancho Christian will remain back East and head down to the Montverde Academy Invitational without returning to California. The MIAT begins on Thursday and includes the host Eagles, the California version of the Eagles, No. 9 Wasatch Academy (Mt. Pleasant, Utah), No. 36 Long Island Lutheran (Glen Head, N.Y.) and previously ranked Vashon (St. Louis, Mo.).