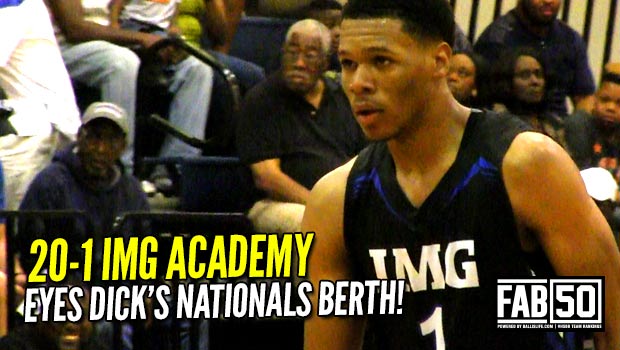 There is plenty of movement and two new teams in the latest edition of the FAB 50 National Team Rankings powered by Ballislife.com. No. 1 Nathan ...(Read more)

MLK weekend always features high-powered matchups that creates plenty of movement, so it should come as no surprise the short week that followed didn’t lead to as much change in the FAB 50 National Team Rankings powered by Ballislife.com. There are only two newcomers to this week’s rankings: No. 41 Linden (Linden, N.J.) and Wasatch Academy (Mt. Pleasant, Utah) checking in at No. 50.

Linden breaks into the FAB 50 following its 71-67 victory over previous No. 9 Patrick School (Elizabeth, N.J.), which falls to No. 28 this week. As has been the theme all season long, we don’t over-penalize ranked teams with strong resumes. We’ll take the lead of the NJ.com Top 20 and keep Patrick School as the Garden State’s top overall team, as it has a split with Linden and bounced back later in the week to defeat No. 39 Roselle Catholic (Roselle, N.J.) 83-68. We’ll find out more about Linden and what the New Jersey pecking order should be on January 24 when the newly-ranked Tigers take on Roselle Catholic.

Patrick School’s other two losses are to No. 4 Memphis East (Memphis, Tenn.) and No. 6 IMG Academy, the latter which has handed Wasatch Academy one of its three losses. IMG Academy will remain behind Montverde Academy in the FAB 50 for the time being because of the head-to-head loss, but the resume of coach Vince Walden’s clubs is quite strong. The Ascenders have defeated 11 teams that are currently ranked or were at one point. They own a victory over the Hamilton Heights Christian Academy (Chattanooga, Tenn.) club that defeated Memphis East, downed Wasatch Academy, 61-51, at the Hoophall Classic and most recently defeated The Rock School (Gainesville, Fla.), 84-63, to drop that club five spots in the FAB 50.

With Trevon Duval, arguably the nation’s top guard, and juniors Emmitt Williams and Silvio De Sousa in the fold, IMG can play with any team in the country. The Ascenders would love to see Montverde Academy again at Dick’s Nationals, the end of the season tournament held in New York March 30 – April 1 which will feature many of the nation’s top teams. IMG doesn’t play for a state title, but in order for No. 1 Nathan Hale (Seattle, Wash.) to have a chance at participating, it will need to capture the WIAA Class 3A state title. The Raiders will look to beat No. 24 Garfield (Seattle, Wash.) for the second time this season in a nationally-televised game on January 27.

Wasatch Academy’s two other losses are to No. 12 Findlay Prep (Henderson, Nev.), 76-65, and a stinker to unranked Windward (Los Angeles). The Tigers have now done enough to offset that hard-to-explain loss, as they own a win over Lone Peak of Highland (the top-ranked Utah team that plays for a state title) and played IMG Academy a lot closer than some other FAB 50-ranked clubs. According to head coach Curtis Condie, Wasatch Academy has to follow all Utah High School Activity Association rules and the lack of practice time contributed to the Windward loss. His team is playing much better as of late and will get to test its rankings work this Saturday versus No. 7 Chino Hills (Chino Hills, Calif.) at the Rolling Hills Prep State Preview Classic at Cerritos College (Calif.).

Chino Hills’ current winning streak is 55 games and will be at 57 heading into Saturday’s game if the Huskies can get by state-ranked Damien (La Verne, Calif.) on Friday night in a league contest. According to Cal-Hi Sports, the state record is 66 games set by Compton (1967-69) and before Chino Hills’ legion of followers can think about the Huskies breaking that record in the CIFSS Open Division title game, the team must get by Wasatch Academy and No. 13 Oak Hill Academy (Mouth of Wilson, Va.) the following weekend at the Nike Extravaganza.

Oak Hill had its 56-game winning streak snapped against No. 2 Sierra Canyon (Chatsworth, Calif.) in December. Can it return the favor against another California club?