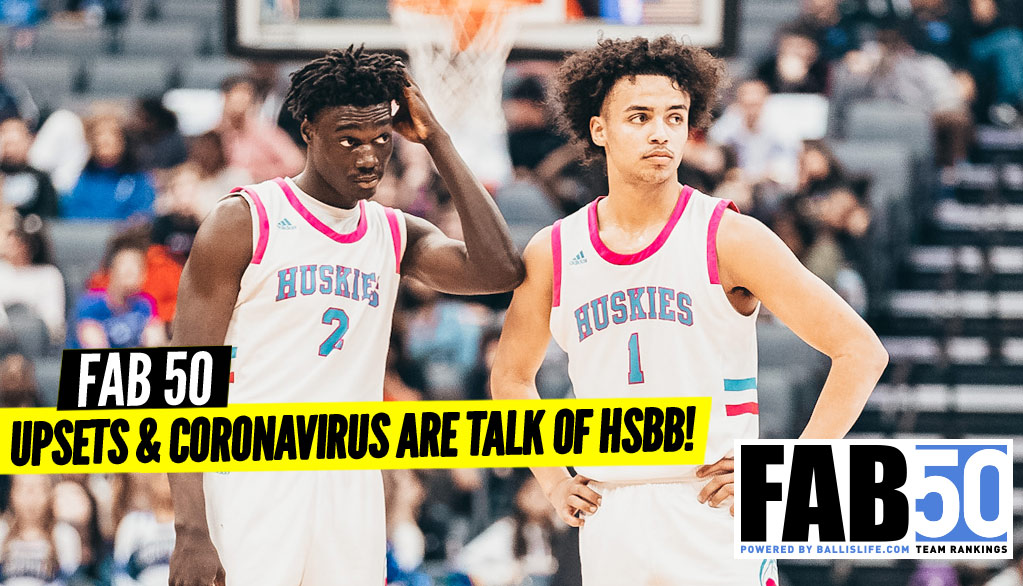 State champs in Georgia and Washington are crowned with more state tournaments wrapping up this week. For some, the tourneys can't end quick enough because of fears school districts may have to close down as a precaution to Coronavirus (COVID-19), as was the case for No. 34 Sheldon (Sacramento, Calif.) over the weekend. Will the Huskies close out their season on the court?

State champions in Georgia and Washington were crowned with more state tournaments wrapping up this week. Previous No. 4 Grayson (Loganville, Ga.) was shocked in the GHSA Class 7A state final and drops in the latest FAB 50 Rankings powered by Ballislife.com, with Garfield (Seattle, Washington, Ga.) making a big splash as one of three newcomers. For some the state tournament can’t end quick enough because there is fear school districts may have to close down school-related activities as a precaution to Coronavirus (COVID-19) as was the case for No. 34 Sheldon (Sacramento, Calif.) over the weekend. Will the Huskies and other ranked teams be able to close out their season on the court?

RELATED: How Your Team Can Become FAB 50 Ranked

Every season, there are off-court issues that impact the on-court results that are the core of the FAB 50 National Team Rankings powered by Ballislife.com. From court-ordered injunctions, to forfeits and inclement weather, we never know what will have an impact on high school basketball games and post-season tournaments around the country. This year a few schools are dealing with the public health scare that could escalate to a pandemic in the near future: COVID-19 or Coronavirus as it’s now commonly referred to in the United States.

For Grayson (Loganville, Ga.), it was looking to secure a berth in GEICO Nationals (April 2-4) with a win over Wheeler (Marietta, Ga.) in the Georgia High School Association (GHSA) Class AAAAAAA state final last Saturday. Grayson came into the game at No. 4 in the FAB 50 against a team it beat during the regular season, but fell in a 60-59 shocker to not only end its GEICO bid but deny the Rams a coveted state title. Making it even more gut-wrenching for coach Geoffrey Pierce’s club was it trailed by double-digits, but came back to take the lead only to see victory snatched from it on a free throw by Wheeler’s Sam Hines Jr. with 1.1 seconds remaining. Hines made his final high school game count, finishing with 28 points (on 11-of-12 shots from the field) and nine rebounds.

“I hate that our season ends on such a sour note, but we missed too many free throws down the stretch,” Pierce told Ballislife.com.

Grayson had four starters with two fouls in the first half, but it was the charity stripe that told the story. The Rams made 5-of-11 free throws in the final period and only 1-of-4 in the final two minutes when the game was on the line. For the contest, Grayson made 10-of-19 and four of those were front ends of 1-and-1 situations.

Grayson simply has too strong of a season resume to drop out of the FAB 50 after losing to an unranked club, so Wheeler is easily the highest ranked of three newcomers this week at No. 26. Grayson, which checks in at No. 29, split with Wheeler and defeated Newton (Ga.) two of three times in 2019-20.

Another ranked team that fell in a playoff shocker, was previous No. 48 Rocky Mountain (Meridian, Idaho), but unfortunately for the Grizzlies they did not have a strong enough overall resume to stay ranked. No team from Idaho has ever placed in a final FAB 50 and Rocky Mountain was being touted as one of the finest teams ever in the Gem State. It all came crashing down, however, in a 73-66 loss to Post Falls (Idaho) in the Class 5A state semifinals. The Grizzlies were outscored 19-6 in the third period, as Post Falls’ Colby Gennett and Alex Horning led the upset bid with 20 points each.

Post Falls lost in the state title game to bubble club Borah (Boise, Idaho), a team Rocky Mountain beat there times during the season. Rocky Mountain’s only other loss was in overtime to FAB 50 No. 2 Wasatch Academy (Mt. Pleasant, Utah). So far, the highest ranked team ever from Idaho is Meridian, which finished No. 7 in the final Midlands Region Top 10 in 1991-92.

One ranked team that may not get to finish it season on the court is Sheldon (Sacramento, Calif.), which last played on February 28 when it captured the California Interscholastic Federation (CIF) Sac-Joaquin Section D1 title over cross-town Capital Christian. With its bye in the first round of the NorCal Open Division playoffs, Sheldon was scheduled to face state-ranked Dublin (Calif.) on March 7 at Cosumnes River College, but was shocked to find out before that night’s game the Elk Grove Unified School District had closed all school-related activities for a week due to concerns surrounding Coronavirus (COVID-19).

In a shocking development, Sheldon’s season appeared over without ever playing a game in the state playoffs. After pressure from the local community and emerging details that perhaps the school district did not consult the Sacramento Department of Health to make such an impactful decision for a wide range of students, the school district reversed its stance. In an unprecedented move that took place Sunday, the EGUSD requested of CIF that in reinsert Sheldon back in the NorCal Open playoffs, pending a determination that it’s safe for Sheldon and Dublin to play after collaboration with the Department of Public Health at the county level.

Monday came and went with no official announcement on Sheldon’s status in the CIF state tournament. Three other programs, one girls team and two boys teams, including state-ranked Riordan of San Francisco in D1, already were dropped from the Norcal regional playoffs on orders from their respective school districts over student and faculty concerns surrounding Coronavirus.

The Sheldon-Coronavirus affair is a stunning development that affects the integrity of the entire CIF state tournament. Not only has No. 34 Sheldon (which moved in front of the Mater Dei of Santa Ana team it earlier beat after that team lost to No. 22 Etiwanda in the SoCal open regional semifinals) been NorCal’s No. 1 ranked team all season long, the Huskies did not practice on any EGUSD site or off-site facility on Monday.

Dublin and NorCal Open finalist Bishop O’Dowd (Oakland, Calif.) are also affected by the Sheldon-Coronavirus affair. Dublin coach Tom Costello expressed frustration on Sunday night of not knowing how to prepare his team for its Monday practice. Should the Gaels prepare for Sheldon or Bishop O’Dowd?

As for Bishop O’Dowd, it knows it will host the NorCal open final and that, regardless of foe, it will be held at Laney College in Oakland (keep in mind Sheldon is the top seeded team in the region). If Sheldon and Dublin play on Tuesday, the regional final will be played on Thursday. If Sheldon does not play and Dublin advances via default, the O’Dowd-Dublin regional final would be on Wednesday. The CIF Open state title game is slated for March 14 at the Golden One Center in Sacramento and on Monday the CIF announced its 40th annual state championships are still on as of now and won’t be re-scheduled.

As of late Monday night, Sheldon was not certain of its status in the state tournament and O’Dowd did not now if Tuesday proposed regional semifinal game would be played. COVID-19 has now affected tons of schools, communities, and travel plans around California, and could lead to more event cancellations in sports and other large gatherings. Already Santa Clara County in Northern California has banned large gatherings of more than 1,000 people effective Wednesday, 12 a.m.

With GEICO Nationals slated for New York City, we expect there to be a formal announcement later this week the event will be played elsewhere in light of New York Governor Andrew M. Cuomo announcing a state of emergency this past Saturday.

Our hope is the end-of-season event, and other state tournaments, are completed without a hitch as long as they don’t compromise public safety. We’ll monitor the situation because there is a heightened awareness of liability for school districts’ decisions in light of Coronavirus. Public health is much more important than national rankings, which are more accurate and more meaningful to players and fans when tournaments are actually played out on the court.

Note: The FAB 50 powered by Ballislife.com is a continuation of the National Sports News Service ratings that began in 1952. These were the first national high school rankings and the late Art Johlfs of Minnesota compiled them. They were compiled for many years by the late Barry Sollenberger of Phoenix, who merged them into the FAB 50 20 years ago. Starting with a weekly format for the 1987-88 season, the FAB 50 is the longest-running weekly national rankings.