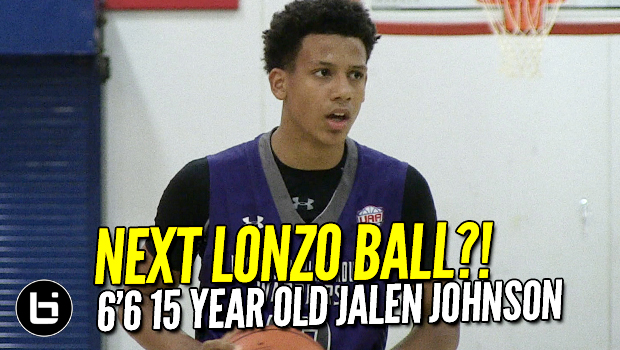 Jalen Johnson has led his Wisconsin Playground Warriors 15U squad to a dominant spring AAU season. After seeing the 6’6 15 Year Old at the NY2LA ...(Read more)

After seeing the 6’6 15 Year Old at the NY2LA Invitational, the first comparable player who came to mind was former UCLA guard, future lottery pick Lonzo Ball!
What do you think? Check out the long passes, rebounding, shooting, dunking, etc… Jalen has been one of the most impressive players we’ve seen from the Class of 2020 this spring.
9th grader Jalen Johnson earned his first offer from University of Wisconsin a few weeks ago. Look for many more high major schools to follow!
Catch Jalen on the Under Armour circuit this summer.
Check out these exclusive raw highlights from Jalen Johnson at the NY2LA Invitational (which they won) near Milwaukee, WI.
For more high school and AAU basketball highlights watch and subscribe to all the Ballislife youtube channels and follow @scottballislife on Instagram and @BallislifeCHI on Twitter.
Thanks for watching and subscribing!