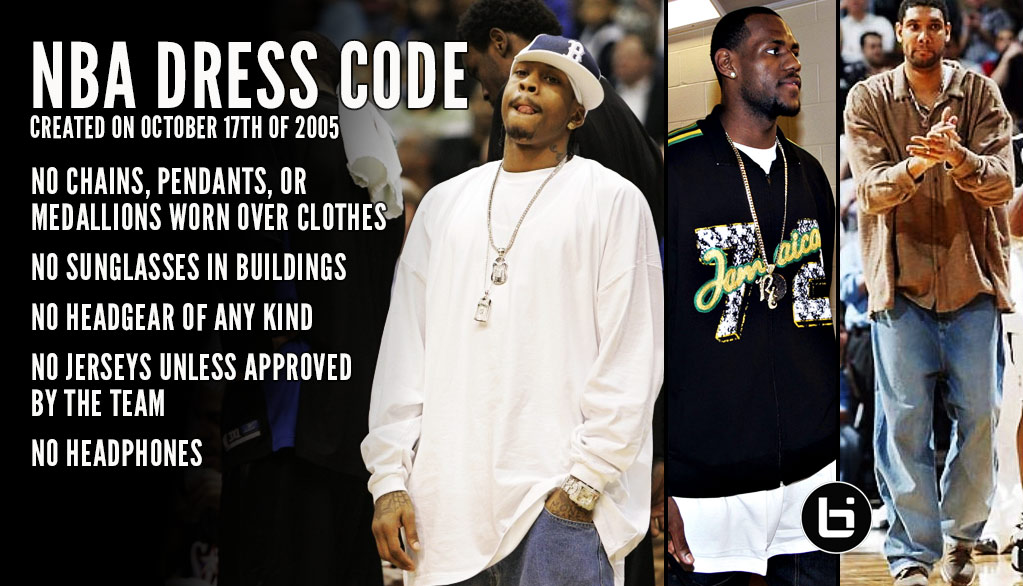 On this day in history, October 17th of 2005, David Stern made the NBA the first major sports league to have a dress code. A dress code that required baggie pants and jersey wearers like Allen Iverson and Carmelo Anthony to “wear business casual attire” to games and a sports coat with dress shoes on the bench. A dress code that meant jewelry lovers like Paul Pierce had to tuck their bling inside of their collard or turtleneck shirts. A dress code that said a big N-O to the following things:

A dress code that some players, like Jason Richardson, thought was targeting just black players.

“One thing to me that was kind of racist was you can’t wear chains outside your clothing.” Said Richardson before a 2005 preseason game. “I don’t understand what that has to do with being business approachable. … You wear a suit, you still could be a crook. You see all what happened with Enron and Martha Stewart. Just because you dress a certain way doesn’t mean you’re that way. Hey, a guy could come in with baggy jeans, a ‘durag and have a Ph.D. and a person who comes in with a suit could be a three-time felon.”

Other players like Stephen Jackson, who was involved in the infamous Malice at the Palace a season earlier, accused the league of being afraid of its players becoming “too hip-hop” and said some the above bullets were “definitely a racial statement.”

After the Monday memo went out to all of the teams, a frustrated Paul Pierce still wore his chains to a preseason game and gave his two cents on the new policy.

“They don’t want your chains to be out, all gaudy and shiny. But that’s the point of them,” Said Pierce. “I love wearing my jewelry. But I love my job. I love playing basketball more than I love getting fined and getting suspended.”

Marcus Camby jokingly said he did not have an issue with the league rules as long as the league gave players a clothing allowance.

Commissioner Stern’s response to feedback from players like Pierce, Jackson and Allen Iverson, who said he was willing to fight to wear comfortable clothes, was a stern one.

“If they are really going to have a problem, they will have to make a decision about how they want to spend their adult life in terms of playing in the NBA or not,” Stern said.

So how did this clothing thing become an issue?

As evident from over 20 players between 2000 and 2005 (including Shaq, Kobe, and Allen Iverson) getting hit with a $10,000 fine for wearing baggy shorts, the Commish wasn’t fond of wearing XXL when you are 5’11” and less than 180 pounds. As evident from David Stern calling Allen Iverson’s rap song “40 Bars” an “offensive and anti-social” one and saying he has “the power to disqualify players who engage in offensive conduct — including inappropriate speech,” he wasn’t too fond of Biggie and Pac and had no issue punishing players who wanted to be like them. But neither of those things was the straw that broke the Commissioner’s back. According to the Washington Post, the catalyst was a Team USA dinner in 2004.

While the Serbian national team wore matching sports jackets, many of the NBA players arrived in an assortment of sweat suits, oversize jeans, diamond earrings, and platinum chains.

Larry Brown, the coach, was said to have been so embarrassed he considered sending some of the worst dressed players back to their hotel.

Brown wasn’t the only coach embarrassed by the way players were dressing. Bulls coach Phil Jackson told ESPN, “The players have been dressing in prison garb the last five or six years. All the stuff that goes on, it’s like gangster, thuggery stuff. It’s time. It’s been time to do that. ”

Not all of the coaches felt it was a big deal. Stan Van Gundy thought it was silly and said the NBA’s dress code was “stricter than the dress code in a lot of office buildings.”

Nuggets GM Kiki Vandeweghe also criticized the code and pointed out there wasn’t one for GMs.

But some of the players, including Grant Hill, were on board. And others, like LeBron James, had no issue with it.

The problem is a lot of guys can’t do their job unless they feel like themselves. We all know the NBA stands for Nothing But Actors but a good director has to make sure the actors are comfortable and have total trust and faith in the director and the director’s vision. That wasn’t the case with the players and David Stern when it came to the dress code.

And to end this trip down memory lane here is the biggest thug in NBA history with the best quote about the code.

“I think it’s a load of crap. I understand what they’re trying to do with hats and ‘durags and jerseys and stuff. That’s fine. But I don’t understand why they would take it to this level. I think it’s basically retarded…I don’t like the direction they’re going, but who am I?”

The answer is the greatest power forward of all-time…and one of the worst dressers too. 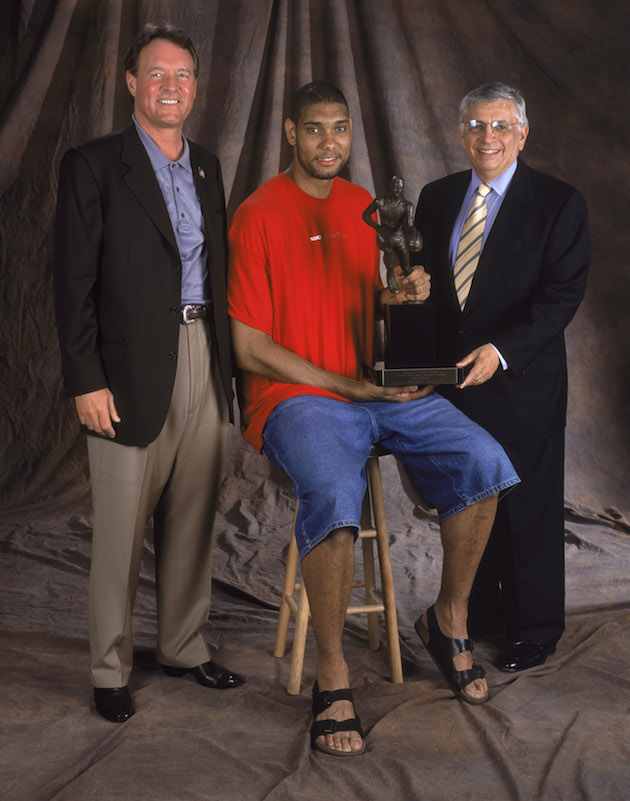 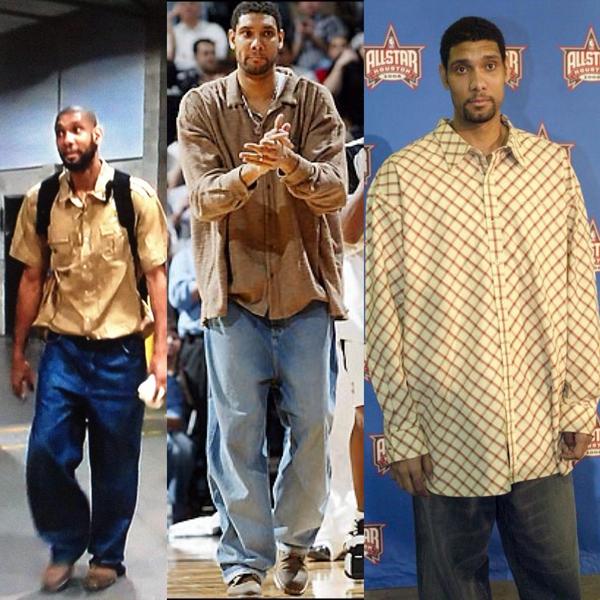 My favorite photo of a NBA player during the baggy era: Allen Iverson! pic.twitter.com/fGTuy3DUpK

Yeah! Here's another pic of Iverson (with Melo).
It's from a 2008 basketball game for kids of servicemen deployed in Iraq.

How did TJ Ford do any moves with shorts this big? pic.twitter.com/zdlXAohrs2

And now we have this…

One Reply to “The NBA Dress Code of 2005: Why It Was Created & How Players Reacted To It”