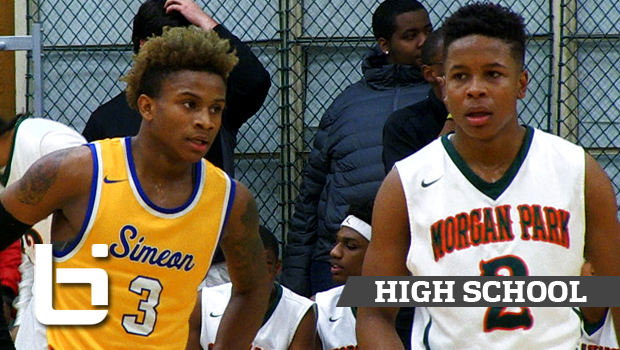 The most competitive Public League High School basketball in the country can likely be found in Chicago. It just so happens the top 2 basketball programs ...(Read more)

The most competitive Public League High School basketball in the country can likely be found in Chicago.
Click here to Read More

It just so happens the top 2 basketball programs in the state of Illinois are also in the same conference (Chicago’s Red South), are located five miles down the street (Vincennes) from one another, and are also bitter rivals.
Over the last 3 years, Morgan Park has won 2 state titles (3a) and finished 3rd in 2015. They’re currently the top team in Illinois and are unbeaten in-state this season (1 loss in Detroit). Simeon has cemented itself as a national power under Coach Rob Smith (6 state titles last ten seasons) producing Derrick Rose, Jabari Parker and more.
When they play (twice a year in conference or for city title), it’s a battle. The gym is always sold-out with friends, family, classmates and fans and cameras are rolling.
Typically Simeon hosts 1 game and Morgan Park’s “home game” gets moved to a larger neutral site as Morgan Park’s antiquated gym accommodates only 250 fans. This season, after threatening a much-publicized boycott if the game were to be held elsewhere, Morgan Park hosted their home game for the first time in years in their tiny South Side gym.
Security was intense and the game was sold-out in advance. Morgan Park had defeated Simeon on the road last month.
This time #4 Simeon (17-3) came into #1 Morgan Park’s (16-2) gym and left with a 60-57 upset victory.
Simeon junior point guard Evan Gilyard finished with 24 points (4 3-pointers) to lead the Wolverines.
Illinois Mr Basketball contender, Memphis-commit Charlie Moore (Morgan Park) scored 19 but needed more support from his teammates.
Simeon senior Zachary Norvell Jr (Gonzaga) scored 18 with 7 rebounds. Rarely-used Simeon reserve, 6’5 junior Madison Lowery came off the bench in the second half and scored a career high 10, giving his team a lift.
Enjoy this extended video from Ballislife as we try to give you a closer look at Chicago HS basketball’s best rivalry.
Check out these extended highlights and postgame coverage of Morgan Park versus Simeon from Chicago’s South Side.
Thanks to everyone at Morgan Park, Simeon and Chicago Public Schools.
For more Morgan Park and Simeon basketball highlights watch and subscribe to Ballislife Midwest youtube channel and follow @scottballislife on Instagram and @BallislifeCHI on Twitter. Thanks for watching and subscribing!