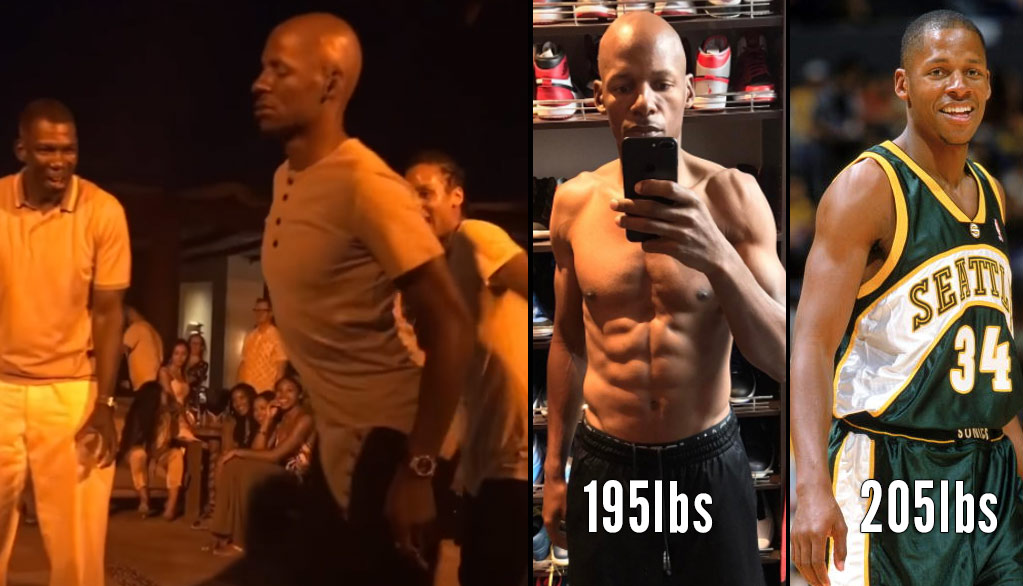 Who needs a Boston Celtics reunion party when you can have a dance battle with Mike Finley and Les Twins? I know, most of you are ...(Read more)

Who needs a Boston Celtics reunion party when you can have a dance battle with Mike Finley and Les Twins? I know, most of you are saying “Who?!” and after watching the video of Jesus with the famous French dancers you will probably be saying “He got game but he don’t got dance moves.”

Here’s what Jesus Shuttlesworth had to say about the video: “My dancing certainly needs work but it was an honor to cut the rug with @lestwinson @lestwinsoff. These dudes are incredible!!!! And yes, a huge shout out to @michaelfinley4 #cabo #jbog #jaysonmyfeet”

Besides “Jays on his feet,” is it me or does the 41-year old Ray look like he’s wearing a baby onesie on his skinny body?  How skinny? Earlier in the year, Ray posted the middle picture below on Instagram showing how he’s weighing less now (195) than he did in college (197) 20 years ago; He was around 205 for much of his NBA career.

Sunday night I started a juicing cleanse for 2 days because I felt like I needed to detox. Since then I have not had a bite of food and It was tough!!!! My mind is tougher though!!! Don’t be controlled by your body’s desires to make you wanna eat foods that will continue to take you down that road that you don’t wanna go down. Health is wealth!! 195 is what I weighed my freshman year in college, 24 years ago. I know a lot of you can get back to your playing weight,Lol. It just requires you to sacrifice. Some foods just aren’t good for us anymore. The foods we ate as kids are not the same. And more importantly, our bodies change and require us to change what we put into it. 38% of American adults in this country are obese. Obesity has reached epidemic proportions in children and adults in America. We need to reduce these numbers. Change how you eat and you will change your life!!!!!!!!! #carpediem #grownman #beorganic #juicefromtheraw #paleolife #changestartswithyourself #notbadfor41

If you don’t know anything about Les Twins, just watch this video, which is as jaw-dropping as a game-tying three in the NBA Finals.