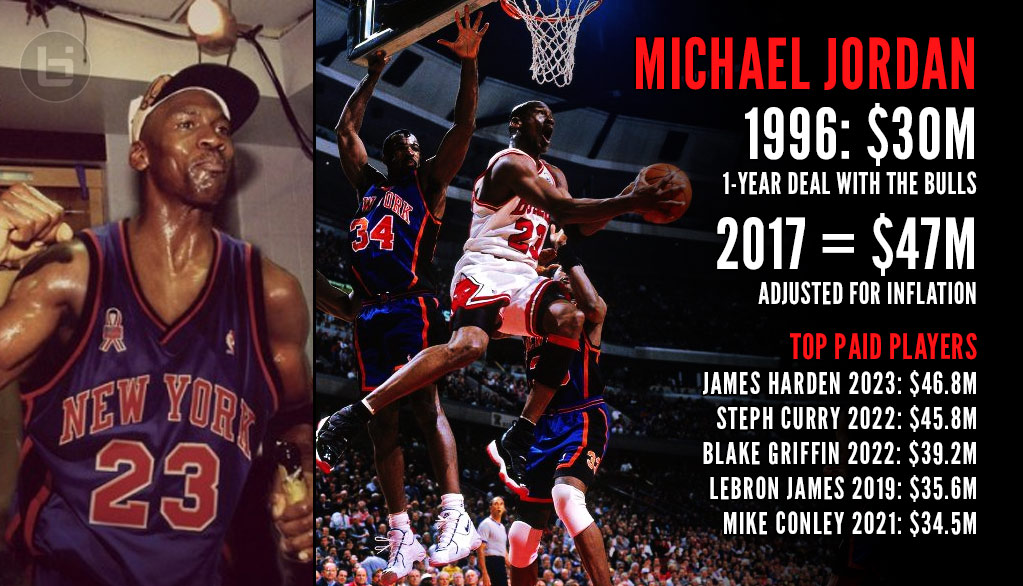 Four days ago, James Harden signed the biggest extension in NBA history. The internet-breaking deal of $228 million over four years will pay the almost MVP about $46.8 million in 2023. As insane as that sounds, if you adjust Michael Jordan’s one-year, $30 million deal with the Bulls from this day in 1996, it will be about $47 million. That means the biggest single-season contract in US sports history 21 years ago is still bigger than any single-season payday Harden, Steph Curry, Blake Griffin or any other player after the GOAT has agreed to. That might change in the near future (John Wall?), but for now, Jordan still has the title.

Like any record-breaking deal, Jordan’s deal had its critics. Some people just couldn’t understand why Jordan deserved to make four times what Wayne Gretzky was making or more than the top NFL player (Deion Sanders, $13.5) and MLB player (Cecil Fielder, $9.2) were making combined. Many others argued he was still underpaid, considering he was the most popular athlete in the world and the biggest reason why the NBA was becoming a money-making machine in the 90s. And if you consider he made just $4 million (around $44M with endorsements) from the Bulls the year before, while ringless players like the Knicks’ Patrick Ewing were making $18.7 million, the deal sounded like a steal.

Speaking of the Knicks, they (along with agent David Falk) are the main reason why the Bulls had to pay $30 million. Jordan initially was willing to sign for just $18 million. Falk thought his 33-year-old client was worth more and the Knicks owners (ITT-Sheraton and Cablevision Inc) were willing to give him more.

ITT owned the Sheraton hotel chain, and the plan hatched by Jordan’s agent, David Falk, was to get Jordan the Knicks’ $12 million in salary-cap money and perhaps another $15 million for being a spokesman for such ITT companies as Sheraton.

The NBA usually regards such outside arrangements as salary-cap avoidance, and any money paid in that manner counts against a team’s cap–unless it can be shown that the player’s market value as a spokesman is that high.

Because Jordan is such a huge commercial presence, his status was considered unique, and the NBA was prepared to allow the separate deal without the money counting against the Knicks’ cap.

The Bulls argued with the league, but Commissioner David Stern’s traditional reluctance to cut off such commercial opportunities changed the parameters of the Jordan negotiations.

The Bulls had believed no team could pay Jordan more than $10 million, perhaps $12 million, so their thinking was he had to return for their offer, whether it was $15 million, $18 million or $20 million.

That led up to an infamous phone call, supposedly from Falk to Reinsdorf.

Although neither side would reveal the exact wording, the message was clear: The Bulls had one hour, maybe the rest of the day, to beat a $25 million offer from the Knicks, or Michael Jordan was going to sign with New York.

The Bulls responded with a $30 million offer and Michael Jordan — playing in a celebrity golf event in Lake Tahoe when the deal was made after less than an hour of negotiations — was happy.

“This team could have a good chance of winning the championship again,” Jordan said after the agreement. “Then after that, you don’t know. They may want to take a business approach to it and change the team. And I want to give them the flexibility to do that.”

As you know, the team would go on to win the championship and again the following year, when he was paid an adjusted $50.5 million!

Also worth remembering about the summer of 96 was the number of shocking contracts and trades that went down:

IN THE WORLD OF HIP-HOP