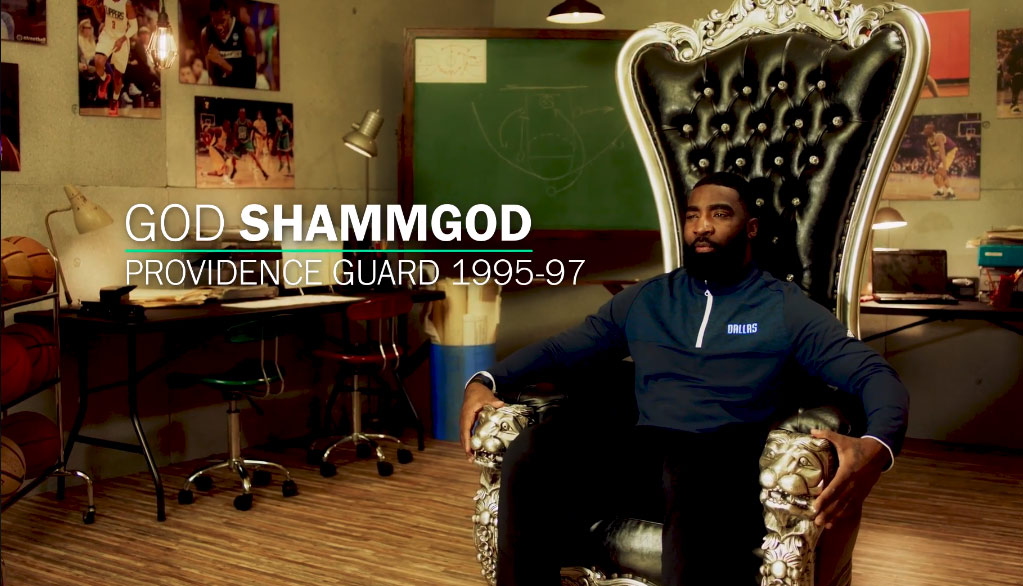 You have probably heard the name Shammgod and seen a “Shammgod crossover” more times than you have ever seen an actual play by the man the ...(Read more)

God Shammgod & The Original Practitioners of the “Shammgod” Crossover

You have probably heard the name Shammgod and seen a “Shammgod crossover” more times than you have ever seen an actual play by the man the move was named after. The same man who taught Kobe Bryant how to improve his crossover. That man, or should I say God, is God Shammgod (formerly known as Shammgod Wells).

Thanks to this new “mini-documentary” from B/R, the world actually gets to see rare footage of the former McDonalds All-American, Providence star and New York legend with a bigger cult following than many of the most popular players in the basketball hall of fame. It sounds odd to say a 45th draft pick — from the not-so-deep 1997 draft with Tim Duncan (#1) and Tracy McGrady (#9) — who only lasted 20 games in the NBA has a bigger fanbase than many NBA greats, but via writers, bloggers, TV commentators, mixtape makers, barbershops and great NBA point guards, his name not only continues to live on, it gets bigger and more legendary every year.

In the doc, handle Gods like Jamal Crawford, Damian Lillard and Kyrie Irving talks about the “deadly” move while some of the best executions of the move — from Chris Paul to Manu Ginobili to Markelle Fultz — are shown.

“The move itself is so wicked.” Says Jamal Crawford. “It’s identifiable. You know it’s his as soon as you see it. And I’ve seen people over the years try to imitate it but nobody can make it look the way he does.”

There’s also an interesting part about Shammgod’s first encounter with Kobe Bryant and Kobe’s dad asking him to give his son a few tips to make him a better ball handler. Here are a few clips of Kobe and his underrated handles in action.

WHO REALLY INVENTED THE “SHAMMGOD MOVE”

The Shammgod is kind of like “Coke” and “Aspirin.” You will hear people ask for a Coke when they are really asking for a soda and will settle with a Pepsi. People ask for aspirin but will take any Ibuprofen. Long before Shammgod pulled off the move in the 1997 NCAA regional finals vs Arizona, players in other countries were doing the move that’s been called the”El Latigo” and “The Whip.”

Many crossover connoisseurs credit 80’s Croatian baller Danko “El Killer del Perimetro” Cvjeticanin as the inventor of the move but Dragan Kicanovic — a Cibona teammate of the late great Drazen Petrovic and members of the FIBA Hall of Fame — was doing it years earlier.

After them, came three-time EuroLeague Champion Dejan Bodiroga, who Carmelo Anthony is a little familiar with (21-second mark of the following video).

So, Shammgod might not have been the first or the “best” to do the move but he made it a household name. And just like Jamal Crawford said, “People over the years try to imitate it but nobody can make it look the way he does.”

HEART OF THE CITY: NEW YORK