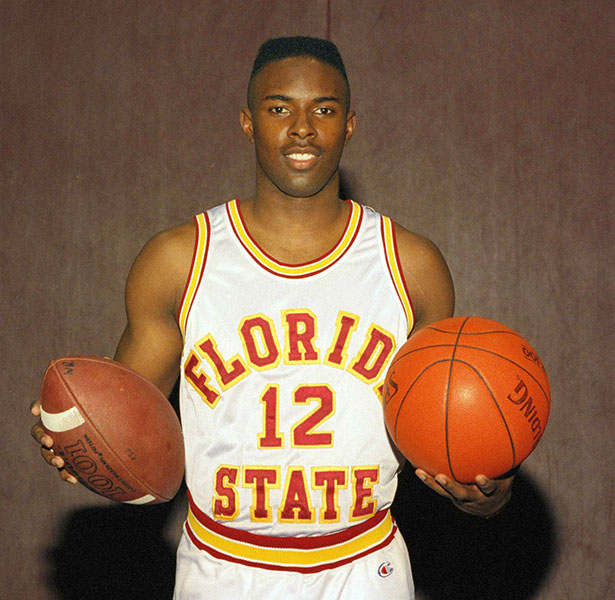 If you aren’t familiar with former NBA player Charlie Ward, here’s what you need to know about one of the greatest college athletes ever: In 1993, he was a Heisman Trophy-winning quarterback at Florida State University (go Noles – I’m an FSU alumnus too). Instead of pursuing a career in the NFL, he decided to take his talents to the NBA. The New York Knicks took a chance with him with their 26th pick in the 1994 NBA draft (he was also drafted by two MLB teams). He never averaged double-figures in points or even six assists in a season but he lasted 11 seasons in the NBA (8 years longer than the average NFL career), mostly with the Knicks, and it was during his time in the Big Apple where his most infamous incident happened: Game 5 of the 1997 ECSF game against the rival Miami Heat.

The results of the fiasco were the most severe penalty in playoffs history up to that point: 5 Knicks — including their two leading scorers, Patrick Ewing & Allan Houston — and one Heat player were suspended for game 6 of the series. New York’s John Starks and Larry Johnson were suspended for leaving the bench and Charlie Ward was suspended because it was his tussle with PJ Brown that started the brawl. Brown was suspended for two games since he was the one who treated Ward like a Quarterback about to be sacked.

Heat Coach Pat Riley also brought up Ward’s football days when he went on a local radio station to talk about the incident.

”Last night, New York couldn’t take their loss, and they continued right up until the last minute and a half to instigate something. As a matter of fact, there were people from the Knick bench that were telling the reserves to start something. And of course, on the free throw, Charlie Ward still thinks he’s at Florida State.”

”If you go back and watch the film. we have our small guys in there to block out. Chris Childs and Charlie have taken six shots to the mouth each because of Alonzo Mourning and P. J. Brown.”

Knicks GM Ernie Grunfeld also released a statement sticking up for his players.

”All of our players served as peacekeepers and the reason they came out was to protect one of their own. ‘The reason they did it is the right reason. The action wasn’t right because now, unfortunately, they’re going to have to be suspended. But I’m proud that they stuck up for a teammate.”

All of the players were fined with Starks receiving an additional $5,000 in fines for giving fans in the crowd the middle finger.

When all of the dust and trash talking was done, the Heat went into the Garden, won Game 6 and then became only the sixth team in NBA history to come back from a 3-1 deficit after beating the Knicks 101-90 in Game 7, behind 38 points from point guard Tim Hardaway.

AFTER BASKETBALL, BACK TO FOOTBALL

After retiring from the NBA and a short stint as an assistant with the Rockets, Charlie Ward went back to football. First as a head football coach at a Houston high school and now as a head coach back in Florida, where he’s still considered a legend.