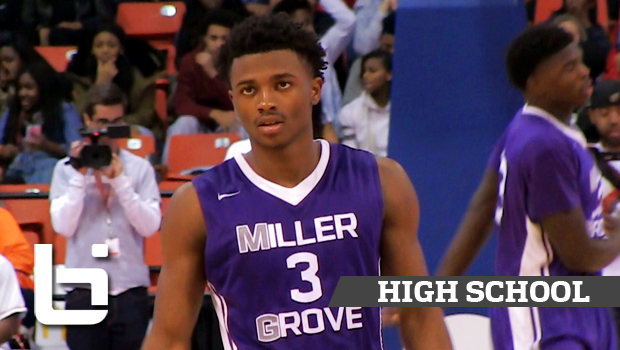 Inclement weather continues to wipe out games on the Eastern Seaboard and out West Bishop Montgomery (Torrance, Calif.) nearly stopped the strong current created by FAB 50 No. 1 Chino Hills (Calif.), but RUN GMZ pulled out a gut-check win on Saturday to retain its No. 1 ranking. Bishop Montgomery remains in the Top 10 while five new teams crack the FAB 50, including three previously ranked ball clubs.

Chino Hills (Chino Hills, Calif.) has gained a national following for its high-scoring, unique and exciting brand of basketball, but lost in all the hoopla is the fact the Huskies have not only won games by having more offensive firepower — but also by gutting out wins over other FAB 50-ranked foes. That was the case in December down at the City of Palms in Ft. Myers, Fla, and it happened again on Saturday in the marquee game of the James Samson Fairfax State Preview versus Bishop Montgomery (Torrance, Calif.) that was streamed live by Ballislife.com (To see the game in its entirety, CLICK HERE).

Chino Hills was held to 29 points below its average and Mr. Basketball USA candidate Lonzo Ball  made only 2-of-21 shots from the field, but the Huskies were still able to pull out a 71-67 win over a Bishop Montgomery team that held a 60-52 lead with six minutes remaining in the game to stay at No. 1 in the FAB 50 National Team Rankings powered by Ballislife.com.

Down the stretch Chino Hills freshmen Onyeka Okongwu and La’Melo Ball made clutch plays, as the Huskies continue to show they are far from a one man show. In fact, Okongwu was so impressive (10 points, seven rebounds, seven blocks) that UCLA and USC offered him a scholarship two days later.

Despite playing a more local schedule in scope, Bishop Montgomery showed it remains a serious contender to capture a second consecutive CIF Southern Section Open Division title (Chino Hills has not yet won a section title with Lonzo Ball) and drops only two spots this week to No. 9. There is a very good chance those two teams will meet once again before the 2015-16 season is complete.

The rest of the top 10 fared well with only previous No. 9 Gonzaga (Washington, D.C.) losing. In WCAC play, the Eagles fell to No. 6 DeMatha Catholic (Hyattsville, Md.) 66-62 after trailing by double-digits at halftime. Mr. Basketball USA candidate Markelle Fultz had a huge fourth quarter with 13 points and finished with 28. Last week, we decided to go against the weekly Top 25 released by the Washington Post (we typically don’t like to go against the grain of credible local rankings) by keeping DeMatha in front of the Eagles after the Stags lost to them 73-70 on January 20. It paid off as DeMatha went on the road to pull out the win.

Gonzaga only falls a spot in the rankings to No. 10, as it now has a split with DeMatha, whereas previous No. 10 Garfield (Seattle, Wash.) lost to DeMatha, 74-64, in December.

Five teams took untimely losses and dropped out, with three familiar faces returning to the FAB 50. No. 49 Advanced International Prep (Dallas, Texas) defeated two previously ranked teams last week, while Lone Peak (Highland, Utah) comes in at No. 47, one spot in front of the Miller Grove (Lithonia, Ga.) team it defeated 73-71 in an exciting game at the FreeTaxUSA.com Shootout in December. The Wolverines took over the top spot in the weekly HoopSeen.com Power Poll after previous No. 1 Westlake (Atlanta, Ga.) fell to No. 5 in that state poll and out of the FAB 50 following two local losses last week.

Lone Peak remains behind the Wasatch Academy (Mt. Pleasant, Utah) team it defeated because that talented club still deserves rankings credit for its 80-71 win over No. 28 La Lumiere (La Porte, Ind.). The Tigers did lose a game last week, but don’t fall in the rankings because it came against No. 2 Montverde Academy (Montverde, Fla.) in the title game of the Montverde Academy Invitational.

Montverde Academy and No. 3 Oak Hill Academy are watching from a distance to see if someone in the CIF ranks can knock off Chino Hills in the post-season to stake a legitimate claim as No. 1. It almost happened last week, but almost doesn’t count when it comes to credible rankings of the nation’s best high school teams.