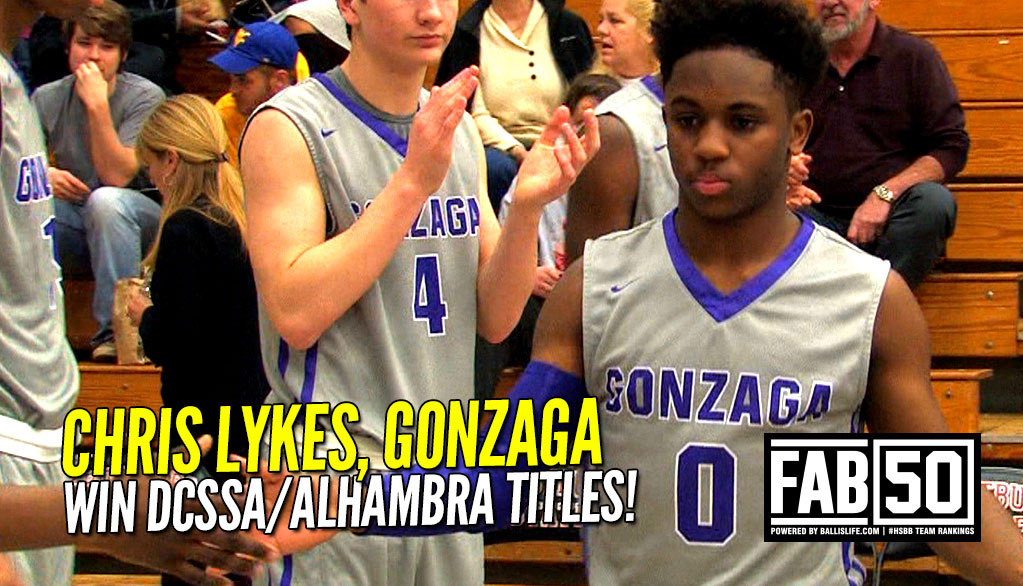 There is some major shakeup in the new edition of the FAB 50 National Team Rankings powered by Ballislife.com as teams around the country wrap up their ...(Read more)

There is some major shakeup in the new edition of the FAB 50 National Team Rankings powered by Ballislife.com as teams around the country wrap up their seasons — some with state titles and some highly-regarded who came up short. How do we handle teams that have a great season but lose their final game? We discuss the season-ending situation with No. 1 Nathan Hale (Seattle, Wash.) and the team that came closest to beating them — Sierra Canyon (Chatsworth, Calif.).

There are nine new teams in the latest FAB 50 National Team Rankings powered by Ballislife.com, including four that recently wrapped up state titles: No. 21 Cypress Falls (Houston), the UIL Class 6A state champions, No. 44 Edmond North, the OSSAA Class 6A champs, No. 48 Meridian, the MHSAA Class 6A title-winning club and No. 50 Basha (Chandler, Ariz.), who took the AIA Class 6A hardware.

Those four state champions have completed their 2016-17 season and their won-loss tally are marked with an asterisk (***). There are some state title-winning clubs that hope their season is still alive and they receive invites to the eight-team Dick’s Sporting Good National High School Tournament March 30-April 1 at Christ the King (Middle Village, N.Y.).

Those include No. 15 Shadow Mountain (Phoenix, Ariz.), No. 20 Tift County (Tifton, Ga.), No. 22 Greensboro Day (Greensboro, N.C.), and No. 27 Greenforest Christian Academy (Decatur, Ga.). Tift County captured the highly-competitive GHSA Class AAAAAAA title to move up 12 spots in this week’s FAB 50. The Blue Devils knocked off No. 25 Norcross, 55-52, in the title game behind 24 points from Micah Johnson and 18 from Rashod Batemon. Tift County held on after a potential game-tying 3-pointer by Norcross’ Kyle Sturdivant rimmed off, as a frantic Norcross comeback after trailing by 11 points with just under two minutes remaining in the game came up just short.

The question always looms of how much to drop title-game losers or teams that have great overall resumes. In the case of Norcross, coach Jessie McMillan’s club actually moves up a spot. The reason? The team owns a win over GHSA Class A Private champ and No. 26 Greenforest Christian Academy (Decatur, Ga.), not to mention No. 29 Mae Jamison (Huntsville, Ala.), the Alabama Class 5A champions. Those results make Tift County, whose only two losses are to No. 5 Montverde Academy (Montverde, Fla.) and a split with Lowndes (Valdosta, Ga.), the most attractive Dick’s Nationals candidate among GHSA state champions.

Those results also push McEachern (Powder Springs, Ga.) back into the FAB 50 at No. 47. That club was up to No. 9 in the FAB 50 before losing its only game of the season, 56-49, to Tift County in the Class AAAAAAA semifinals. Another club in the FAB 50 that didn’t capture a state title is No. 23 Skyline (Dallas, Texas), which lost to eventual UIL Class 6A state champ Cypress Falls (Houston) 46-43 in a wild triple overtime semifinal affair. There could be a few more highly-regarded teams to break back in after all playoff results from around the country have been tabulated. One of those is likely to be previous No. 11 Sierra Canyon (Chatsworth, Calif.), which fell all the way out after falling to new No. 38 St. Augustine (San Diego, Calif.) 88-81 in a SoCal Open Division regional playoff game.

The problem with dropping Sierra Canyon out of the FAB 50 is it has arguably the best set of regular season wins in the country, but fell flat against a CIF San Diego Section team in its regional playoff opener for the second consecutive season. Last season’s upset loss was the primary reason why Sierra Canyon started out in the FAB 50 California preseason pecking order behind current No. 7 Bishop Montgomery (Torrance, Calif.).

Sierra Canyon owns wins over current No. 2 La Lumiere, No. 3 Memphis East, No. 12 Findlay Prep, No. 13 Oak Hill Academy and No. 18 Gonzaga (Washington, D.C.), so the Trailblazers have a strong argument to be included in the final FAB 50. They lost by two points (67-65) to No. 1 Nathan Hale (Seattle, Wash.), which leads into our next rankings dilemma – the Raiders’ recent decision to skip Dick’s Nationals despite the WIAA granting its state champions the opportunity to play if selected.

When Hale defeated Sierra Canyon in the finals of the Les Schwab Invitational and rose to No. 1 thereafter, there was no quarrels or complaints about its ranking. It was deserved (as Sierra Canyon had already defeated preseason No. 1 Oak Hill Academy) and Sierra Canyon’s January wins only strengthened Hale’s rankings position. Only after Hale’s decision to skip the end-of-season tournament is its ranking being questioned and it holds some validity. Hale’s win over Sierra Canyon has lost some strength and the Raiders won’t be playing anymore games while other highly-ranked teams duke it out for the Dick’s Nationals crown.

Based on comments published by the Seattle Times, the WIAA Class 3A state champions are turning down the opportunity to play based on its rankings position and leverage in the situation. In other words, Hale already has a legit claim to the No. 1 rankings position, and has more to lose than gain by playing. The sentiments of the coaching staff and players would be different if it wasn’t the current No. 1 ranked team in the country.

There are some points that need to be made clear about the situation:

1. Hale’s ascension to No. 1 was based on results and it dropping from that position will be based on the same. In doing a version of the FAB 50 since the 1987-88 season, the most important factor in determining rankings have been the results of games. Trying to take the adult and business element out of the situation (injections, forfeits, defaults, state association regulations regarding travel, number of games, etc.) and relying of the results put forth by the student-athletes gives us the  best possible chance for accurate rankings and we’ll stand by that policy and the track record it has produced. A good example of this is when Curie (Chicago) was forced to forfeit wins during the 2013-14 season, including one to national power Montverde Academy (Montverde, Fla.). We allowed it to play out on the court (as opposed to in the courts) and that’s the route we’ll follow in this situation.

2. This is not a similar situation to Chino Hills (Chino Hills, Calif.) last season with regards to a public school winning the mythical FAB 50 national title despite not playing at Dick’s. The Huskies went 35-0 on the court and rose to No. 1, but didn’t have the opportunity to get invited to play based on CIF rules. There is no telling how the Huskies would have fared, but Hale’s situation shouldn’t be compared to Chino Hills’ at all. Hale had and has the opportunity to play.

3. This situation also isn’t quite the same as the one in 2011-2012 when Oak Hill Academy (Mouth of Wilson, Va.) turned down an opportunity to play in Dick’s Nationals because we don’t know yet for certain who will be in the running for the mythical national crown based on the results of that event and what common opponent factor that may produce. At the end of that season, Findlay Prep (Henderson, Nev.) won Dick’s Nationals in dramatic overtime fashion over Montverde Academy. Findlay Prep lost to La Lumiere by a point that season and Oak Hill beat that same team (which also participated in the 2012 event) by 18 points. At the conclusion of the 2010-2011 season, Montrose Christian (Rockville, Md.) won the event (then known as the NHSI) but lost to Linden (Linden, N.J.), a team unbeaten and FAB 50 No. 1 St. Anthony (Jersey City, N.J.) defeated. We don’t have the same situation here — at least not yet — as it relates to on-court results or common opponents.

4. In 2012, then first year Montverde Academy coach Kevin Boyle stated the decision by Oak Hill Academy to not participate was a bad precedent and we agreed with him and still do. That season, Oak Hill ventured to China before the event was scheduled to take place, but this time around Hale doesn’t appear to have any extenuating circumstances preventing it from playing. As Michael Porter Jr. told the Seattle Times, he feels the team doesn’t have anything to prove, although many of the players reportedly expressed a desire to play. Hale’s decision gives a future team with a No. 1 resume the leverage to opt out and in our opinion, that is not good for high school basketball. The more results we have among ranked teams gives us a better opportunity for accurate national rankings, since there is no NCAA-type national championship tournament that includes a champion from every state association or something similar.

5. In our opinion, it’s a great opportunity for programs to play in the event, and there are many state champions that would love the opportunity Hale had. In the bigger picture, Hale’s decision is a step back in two of the FAB 50’s goals — to promote high school basketball on a national level and bring us closer to crowning a national champion on the court. One of the reasons we produce national rankings is to one day see a NCAA-type national tournament and to promote — or critique — its execution. Two immediate changes we’d like to see implemented are state associations and programs publicly stating its intentions to play in Dick’s before the conclusion of its respective state tournament. Fans and pollsters have been eyeing Hale’s participation before it won a state title. Don’t give teams the leverage to play or opt out depending on its national standing in polls. Secondly, all state associations should adopt an open division or Tournament of Champions so it’s clear which team would be invited (if eligible) and to bring us a step closer to open division champions from around the country meeting on the court.

We always think bigger picture, because we want high school basketball around the country to thrive, not set back by off-the-court decisions.