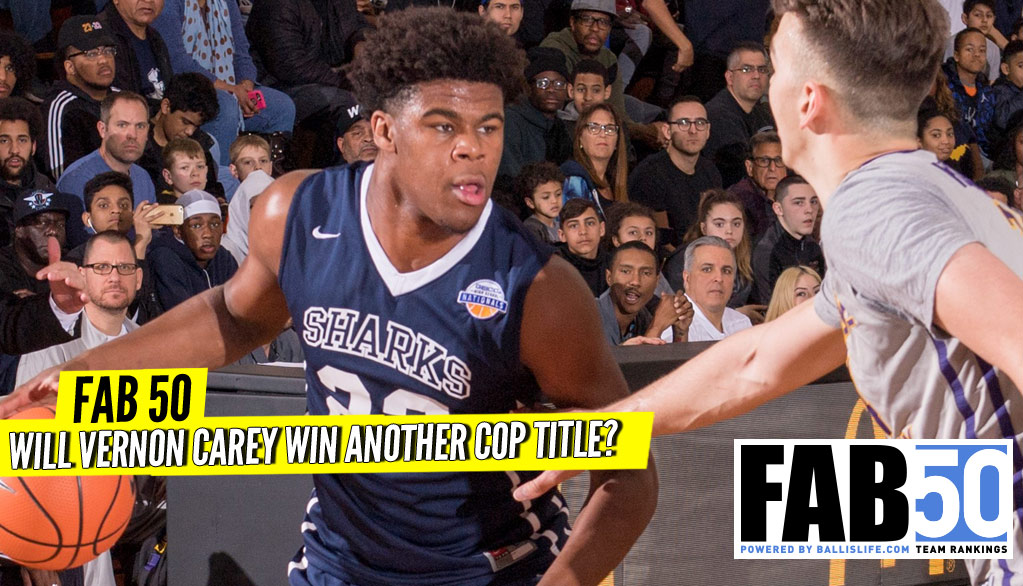 It’s the calm before the storm as four new teams enter the FAB 50 National Team Rankings powered by Ballislife.com as the major holiday tournaments are set to tip-off this week. The highest rated newcomer this week is No. 34 Hamilton Heights Christian Academy of Tennessee. There was some movement, but expect major changes based on the results of the holiday tournaments in our next update after we ring in 2019. Can Montverde Academy hold on to the top spot? Will No. 6 University School win the City of Palms Tournament for the second consecutive season?

This week we strived to get out the latest edition of the FAB 50 National Team Rankings powered by Ballislife.com as quickly as possible. No, we didn’t want to cheat the process of looking up scores from all over the country or break down the teams with deeper analysis than anyone; we just want to make sure the rankings stay relevant because tournaments with major rankings implications are tipping off all over the country as early as Monday night.

The big result over the past week was Roman Catholic (Philadelphia, Pa.) knocking off previous No. 6 Imhotep Charter (Philadelphia, Pa.), 92-69, in a battle of defending PIAA champions. Penn St.-bound Seth Lundy had a terrific game for the victorious Cahillites, as he scored 27 points on 7-of-12 shooting from the field while also contributing eight rebounds. Roman Catholic also got a terrific performance from 6-foot-9 Jalen Duren, who finished with 17 points in a physical battle. It’s hard to imagine there is a better freshman front court player in the country than Duren.

As a result of that big win, the Cahillites move up 31 spots this week to No. 12, as Imhotep Charter falls seven spots right behind Roman. Imhotep Charter, which was led in defeat by Maryland-bound Donta Scott, still has a veteran team with one of the best resumes in the country over the past three years and can’t fall any further. Roman’s sole loss was a 70-61 setback to No. 4 DeMatha Catholic (Hyattsville, Md.) in a game that was close to the end. The Stags rebounded from their own loss to No. 3 IMG Academy (Brandenton, Fla.) by defeating then No. 17 Guyer (Denton, Texas) 60-53 at the ARS/Rescue Rooter National Hoopfest in Dallas on December 15. Guyer has played one of the toughest schedules in the country and falls to No. 21 this week.

The highest rated newcomer this week is Hamilton Heights Christian Academy (Chattanooga, Tenn.), which checks in at No. 34 after posting wins over the weekend at the Bartlett Invitational versus then No. 22 Memphis East (66-63) and No. 41 Bartlett (85-83). Both losing clubs remained in the rankings this week because of the nature of the opponent and the close scores.

How Will City of Palms And Other Tourneys Affect Rankings?

Unbeaten University School (Ft. Lauderdale, Fla.) is looking to defend its City of Palms Classic title, but it won’t be easy by any means. The Sharks, currently ranked No. 6, are one of 11 FAB 50 ranked teams in the field. University School, led by Mr. Basketball USA candidate Vernon Carey, opens the tournament on December 18 with No. 22 Vashon (St. Louis, Mo.). The University-Vashon winner will likely take on No. 13 Imhotep Charter in the second round on Thursday, as the Panthers look to bounce back from the loss to Roman Catholic.

On the same side of the bracket lies in wait No. 2 Oak Hill Academy (Mouth of Wilson, Va.) and No. 39 Olive Branch (Olive Branch, Miss.), which are likely to meet in the second round. Oak Hill Academy is in the COP bracket for the first time since 1991, when it lost in the tournament semifinals and finished No. 2 in the final 1991-92 rankings. Last season, Oak Hill handed University School its only regular season loss. Will the Sharks return the favor or will a team like Imhotep Charter break up a pontential Oak Hill-University semifinal?

On the other side of the bracket, No. 28 Mountain Brook (Mountain Brook, Ala.) has already defeated No. 40 Wilson (Washington, D.C.) and the two-time defending AHSAA Class 7A state champs are likely to face No. 3 IMG Academy (Brandenton, Fla.) in a Thursday quarterfinal contest. No. 9 Paul VI (Fairfax, Va.) faces No. 33 Immaculate Conception (Montclair, N.J.) to open the COP bracket with the winner likely facing No. 10 McEachern (Powder Springs, Ga.) in the quarterfinals. IMG Academy is a big favorite to reach the semifinal, where Paul VI, Immaculate Conception or McEachern will be quite a test.

Does University have the depth to advance to the championship game? Or will the most talented and top-rated teams in the field, Oak Hill Academy and IMG Academy, meet?

In the Tarkanian Classic at Bishop Gorman High School in Las Vegas, bracket play begins Wednesday and the Gaels, ranked No. 26, are the defending champions and a favorite to reach the tourney semifinals. It could meet No. 47 Whitney Young (Chicago, Ill.) or talented Sheldon (Sacramento, Calif.) in the semis. On the other side of the bracket, a monster semifinal between No. 17 Rancho Christian (Temecula, Calif.) and No. 24 Federal Way (Federal Way, Wash.) would be a mixtape dream, as both teams are unbeaten, contain high-level players and have aspirations to climb in the rankings.

Rancho Christian has FAB 50 title aspirations, but must win Tarkanian to avoid a steep uphill climb in the rankings. In order to become a serious title contender, the Eagles will at some point have to get by No. 7 Sierra Canyon (Chatsworth, Calif.), which will participate in the Iolani Tournament in Hawaii beginning on December 19. Sierra Canyon could meet surging No. 30 Oak Ridge (Orlando, Fla.) or Westchester (Los Angeles, Calif.) in the semifinals. Westchester just missed the FAB 50 this week.

On the other side of the bracket, top-ranked Montverde Academy (Montverde, Fla.) will likely meet No. 5 La Lumiere (La Porte, Ind.) in the semifinals. It would shake up the rankings going into the next set of rankings in 2019 if La Lumiere, Sierra Canyon or Oak Ridge were to knock off the Eagles and win the Iolani.