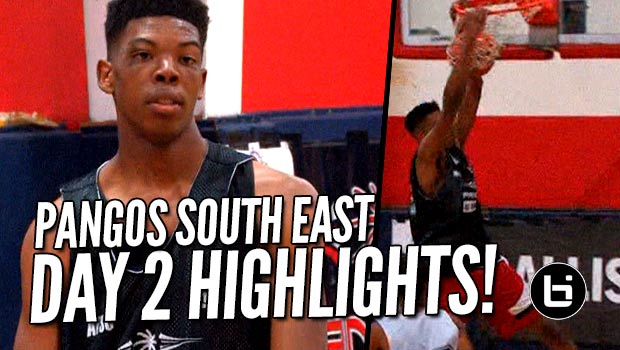 The Pangos All-Southeast Frosh/Soph Camp was short on numbers, but definitely wasn’t short on talent as the Cream of the Crop talent was comparable to the other four ...(Read more)

The Pangos All-Southeast Frosh/Soph Camp was short on numbers, but definitely wasn’t short on talent as the Cream of the Crop talent was comparable to the other four stops on the fall Pangos tour. Sophomore forwards Luke Anderson and Omar Payne were named game MVPs. Athletic wings Niven Glover and C.J. Walker were named camp Co-MVPs.

The Pangos All-Southeast Frosh/Soph Camp wasn’t big on numbers, so the Cream of the Crop All-Star Game held at the Lake Brantley Sports Complex in Altamonte Springs, Fla. was reserved for the event’s 20 best players with an emphasis on individual matchups that camp’s scouts and coaches wanted to see.

When the dust settled, the nine sophomores (2019) and lone freshman (2020) selected to play for the White club put their stamp on the camp by dominating the Black club in the Cream of the Crop game to the tune of an easy 103-74 victory.

Leading the way for the victorious white club was team MVP Luke Anderson, a talented 6-foot-8 sophomore forward from Lakeland (Fla.). Anderson made an impact on the camp’s first day, and was originally seen as a “borderline” selection to the top game. He then went out and proved he belonged, knocking down open shots from the perimeter, making the correct reads on offense, and crashing the boards with a vengeance. Anderson finished with an efficient 18 points and six rebounds.

Another standout for the wining White club was Darin Green, a 6-foot-4 sophomore shooting guard from Wharton (Tampa, Fla.).  Green didn’t score much (four points), but he was steady and graded out higher in his matchup with 6-foot-4 sophomore Austin Van Zyl of York Prep (Rock Hill, S.C.). Green was one of the best outside shooters in attendance, as he put on shooting exhibition in an earlier Sunday game.

Strongman Blake Hinson, a 6-foot-7 sophomore power forward from Deltona (Fla.), ran the floor and finished all but one of his 2-point field goals after missing two early 3-point field goal attempts.. Hinson, a physical specimen with a solid perimeter game, finished with 21 points and five rebounds.

Scoring a game-high 25 points while grabbing four rebounds was athletic freak Niven Glover, a 6-foot-3 jumping jack from Oak Ridge (Orlando, Fla.). Glover attacks the rim with a vengeance and for the most part intimidates defenders from mounting a serious defense against him around the rim for fear of getting “posterized”. One player who wasn’t afraid to challenge him, 6-foot-9 sophomore Omar Payne of Osceola (Kissimmee, Fla.), became a victim by challenging him. Glover rose over the top of him to throw down a vicious power dunk that was not only the signature play of the Cream of the Crop All-Star Game, but the dunk of the camp and arguably the dunk of the entire five-camp tour.

Glover’s dunk evoked images of a young Schea Cotton (the 1990’s wunderkind power dunker from Southern California whose NBA career never materialized) for Frank Burlison of BurlisonOnBasketball.com. Glover does have that kind of power and leaping ability, and is aware he needs to shore up the mechanics of his perimeter shot and improve off the dribble in order to maximize his potential. Glover is eager to put in the necessary gym time in order to shore up his offensive game and was humble enough to realize he still has ways to go to be an elite high school player.

While Glover may have “caught” Payne, it didn’t affect his overall performance in the Cream of the Crop game or on the camps’ second day. Payne gave maximum defensive effort and was named team MVP with 10 points, five rebounds and a game-high five blocked shots. Payne’s athletic, upright style evoked images of Clifford Rozier, a 1990 McDonald’s All-American out of Southeast (Bradenton, Fla.) who was recruited to North Carolina by legendary coach Dean Smith. The scouts in attendance wanted to see a matchup between Glover and Anderson and ironically both of them came away as game MVP’s.

Another high anticipated matchup came between point guards Tre Mann, a 6-foot-2 sophomore from The Villages School (Wildwood, Fla.), and Samuel Griffin, a 6-foot-1 sophomore from Norland (Miami). They were the two most talented true lead guards in attendance and it was Mann coming away with the more impressive performance despite playing for the losing black team.

Mann finished with 13 points and four rebounds and proved to be a bit more explosive off the dribble than his counterpart from Dade County, who netted one field goal and five assists. Griffin came out like gang-busters on day one of the camp, but Mann closed a bit stronger.

Glover came away as the co-Camp MVP with 6-foot-7 C.J. Walker, a 2019 sophomore from Orlando Christian Prep. Walker finished the Cream of the Crop game with eight points and five rebounds for the Black club.