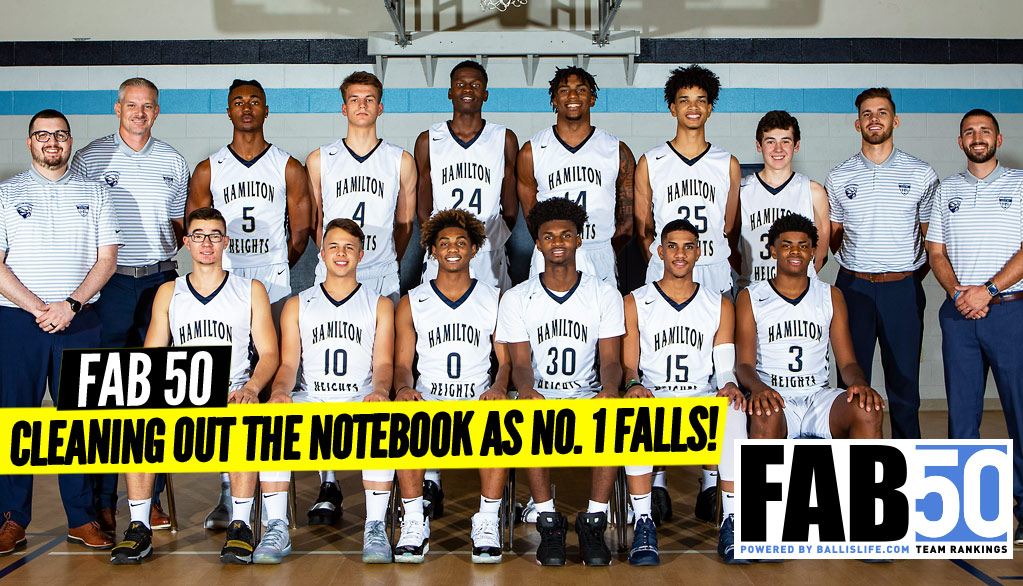 Preseason No. 1 IMG Academy went down at the National High School Hoops Festival in Hyattsville, Md. No. 10 Sunrise Christian Academy records big wins at the event. In other big news, there was a 50-game winning streak snapped, a big coaching change in the academy school ranks and some big off-the-court news.

Cleaning Out The FAB 50 Notebook

There is no FAB 50 update this week, but there is still significant news around high school basketball, starting with preseason No. 1 IMG Academy (Bradenton, Fla.) going down at the National High School Hoops Festival in Hyattsville, Md. No. 10 Sunrise Christian Academy (Bel Aire, Kan.) records big wins at the event. There was also a 50-game winning streak snapped, a big coaching change in the academy school ranks and some big news off the court.

There wasn’t a FAB 50 update this week, as we’ll update our national team rankings on December 16 right before the start of the nation’s top pre and post-holiday tournaments, which include a vast majority of the top ranked teams, and then come back and begin our weekly updates beginning January 6, 2020. One thing we know for sure, is there will be a new No. 1 team next week as No. 1 IMG Academy (Bradenton, Fla.) fell to No. 4 Paul VI (Fairfax, Va.), 67-56.

Paul VI has turned in plenty of significant regular season victories over highly-ranked foes in recent years, including a win over 2013 FAB 50 national champ Montverde Academy (Montverde, Fla.) at the Bass Pro Tournament of Champions, but last weekend’s win at the National High School Hoops Festival was quite impressive as it’s clear the Panthers will be a viable FAB 50 title contender all season. We began the Panthers at No. 4 in the preseason and not any higher because of some concerns about their interior prowess, but with the level of talent their backcourt plays at, it might not make any difference. Paul VI led by as much as 17 points with just under four minutes in the game after IMG Academy quickly went up 5-0. Paul VI held a 32-29 halftime lead.

The Panthers were led to victory by Duke-bound Jeremy Roach, who has successfully recovered from ACL surgery that caused him to miss his junior season, and junior guard Trevor Keels. Roach finished with 16 points, four rebounds, three assists and knocked down three critical 3-pointers. Keels had a team-high 25 points, four rebounds, two steals and knocked down 5-of-12 3-point attempts as the Panthers got rolling from the outside. When you add in Josiah Freeman, who knocked down 4-of-10 3-pointers the following night in Paul VI’s 78-75 win over Word of God Academy (Raleigh, N.C.), and sophomore Knasir “Dug” McDaniel, it just might be the best quartet of guards we’ve seen on one team in recent memory.

Tennessee-bound Jaden Springer led IMG Academy with 18 points in the loss. The Ascenders won’t fall too far in the rankings because we know they are one of the best teams in the nation and were playing Paul VI without the services of Duke-bound Jalen Johnson and guard Matthew Murrell. IMG Academy was able to bounce back the next evening and take some of its frustrations out on Cornerstone Christian (San Antonio, Texas) with a 85-51 victory. Once again Springer was a catalyst, as he finished with 22 points, including 3-of-5 3-pointers, nine rebounds and eight assists. He’s the one guy IMG Academy cannot afford to be without.

A Washington Catholic Athletic Conference (WCAC) program got the big win at the DC Hoopfest, but it’s not often that a program knocks off two WCAC powers in back-to-back outings, but that’s exactly what happened for No. 10 Sunrise Christian Academy (Bel Aire, Kan.). The Buffaloes defeated No. 12 Gonzaga (Washington, D.C.), 61-55, and came back the next night in the event’s final game to shock host and No. 3 DeMatha Catholic (Hyattsville, Md.) 75-67.

The best player on the floor in the Sunrise-Gonzaga game was 6-foot-7, 2021 prospect Kendall Brown, who made some clutch plays and finished with 18 points on 7-of-8 field goals with his only miss coming from behind the arch. Senior point guard Ty Berry was also integral in the win, with good decision-making, ball-handling and outside shooting. He finished with 14 points, including two 3-pointers and is a terrific recruiting coup for Northwestern. Against DeMatha, Berry was the catalyst with 21 points, including 3-of-6 3-pointers, four rebounds and two steals. The Buffaloes were in control throughout, even though Brown didn’t have his best outing.

DeMatha was plagued by poor shooting and the foul trouble of Michigan-bound center Hunter Dickinson. The Stags will also need their complimentary components to step up if they are going to challenge Paul VI for the WCAC crown. As of now, it looks like the Panthers rate as the favorites. DeMatha will look to turn it around quickly as it faces conference foe Bishop O’Connell (Arlington, Va.) on Tuesday night and will have a chance to atone for the loss to Sunrise Christian when it travels to face No. 2 Montverde Academy (Montverde, Fla.) on Thursday night in a nationally-televised matchup.

Keels and Brown are not the only players who impressed over the weekend and merit serious All-American acclaim. The same holds true for wing Samson Ruzhentsev of No. 15 Hamilton Heights Christian Academy (Chattanooga, Tenn.), which upped its record to 9-0 with a 67-52 dispatching of Hillcrest Prep (Phoenix, Ariz.) in the final game at Hoophall West in Phoenix.

Ruzhentsev showed everyone in attendance and a national stream audience why he’s quite underrated nationally by major recruiting services. He can handle and shoot it well, can score on all three levels and has pro athleticism. Ruzhentsev led a balanced attack against Hillcrest Prep with 17 points. We also liked what we saw from junior point guard Dominiq Penn and senior forward Andersson Garcia. Hamilton Heights has a complete team and it will take a supreme effort to knock it off.

With just 2 minutes remaining in the game, @SencireH made 2 HUGE plays to propel @STVMAthletics to a 64-59 win over Cincinnati Moeller.

Prior to yesterday, Moeller had won 50 games in a row with their last in state loss coming to Massillon Jackson in March of 2017. pic.twitter.com/SGvV7YkRLJ

While we wished he’d started Hamilton Heights Christian Academy a tad higher than No 19 in the preseason FAB 50, there’s another team we wished we had given more preseason consideration to that comes out of the West Region. That would be Mount Si (Snoqualmie, Wash.), which actually was impressive at this summer’s Section 7 Team Camp in Phoenix during the NCAA’s new June live period. Mount Si should have been in front of a few of the California teams in our preseason West Region Top 20 as Washington’s No. 2 team behind current FAB 50 No. 28 O’Dea (Seattle)…
After the Hoophall West event, it was announced on Monday that Hillcrest Prep (Pheonix), which was touted as a top five team nationally in rankings in which the Bruins are eligible for, parted ways with head coach Mike Bibby. Hillcrest Prep has a talented roster but were out of sync and unfocused at the event….
No. 23 Moeller (Cincinnati, Ohio) saw its 50-game winning streak snapped in a 65-59 loss to St. Vincent-St. Mary (Akron, Ohio), which barely missed out on a preseason Midwest Region Top 20 rankings spot. St. Vincent-St. Mary will be in the national spotlight this weekend when it faces FAB 50 No. 6 Sierra Canyon (Chatsworth, Calif.) at the Ohio Play-By-Play Classic at Nationwide Arena in Columbus, Ohio on December 14. SV-SM, of course, is the alma mater of two-time Mr. Basketball USA LeBron James of the Los Angeles Lakers and his son is a rotation player as a freshman for Sierra Canyon. The Trailblazers will be without Ziaire Williams until December 30, but with B.J. Boston playing terrific, were no match for No. 47 Millennium (Goodyear, Ariz.) at Hoophall West. James led “St. V’s” to the No. 1 FAB 50 ranking in 2002-03 with an unbeaten on-court record….
Two major developments for high school basketball fans to keep an eye took place over the last four days. It was announced Sports Illustrated will take a deep dive into collegiate recruiting in both football and boys basketball with the creation of SI All-American. The company has already announced a director of recruiting whose expertise is college football. It will undoubtedly announce a director of college basketball recruiting at some point in the future. It will be interesting to see how SI creates national player rankings as the industry continues to evolve and move away from traditional journalism work…
Speaking of traditional media and journalism, we learned USA Today will close its high school department and many people who covered high school sports for the nationally circulated newspaper are out of a job. It was known in industry circles that USA Today would be moving away from high school human interest and news content, but the slashing of the entire department still sent shockwaves through the industry. No word yet on how or whom will spearhead USA Today’s Super 25 team rankings, which have been around since the fall of 1982. They were most recently spearheaded by Jason Jordan, and previously by Jim Halley, Chris Lawlor (who currently does a Top 25 for Blue Star Media) and originally by Dave Krider. Krider began weekly national rankings for Basketball Weekly in 1974-75 and actually wasn’t able to complete them that first year due to a disagreement or misunderstanding with management. He compiled them from 1976 to 1983 and then switched over to USA Today, which helped grow the popularity of national high school rankings. The first end-of-season national rankings were compiled by the late Art Johlfs, and the Minnesota multi-sport high school coach and official originated his National Sports News Service rankings at age 21. Those original national rankings continue today as the FAB 50 National Team Rankings, which originated as a weekly under the National Prep Poll in 1987-88 and have continued in its current FAB 50 format for the past 20 seasons.