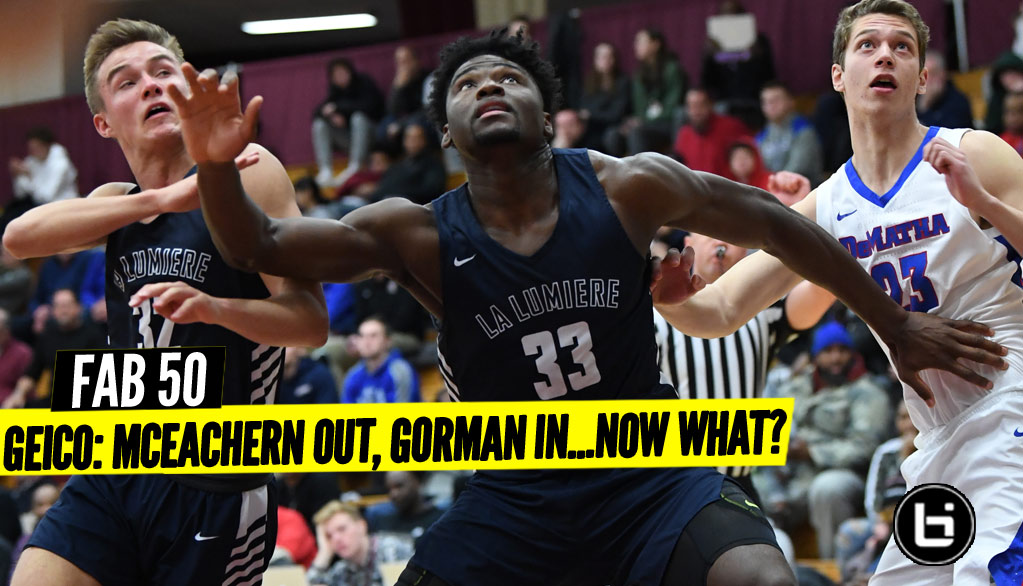 FAB 50 No. 2 McEachern (Powder Springs, Ga.) season is complete at 32-0, as it was announced last Friday the Indians will not participate in GEICO Nationals. What does this mean for the tournament? What does it mean for the final FAB 50 rankings?

FAB 50 No. 2 McEachern (Powder Springs, Ga.) season is complete at 32-0, as it was announced last Friday the Indians will not participate in GEICO Nationals. Had McEachern participated, the top four seeds in the tournament would have the top four teams in the FAB 50 and the event would have likely had its strongest field, top to bottom. What does this mean for the tournament? What does it mean for the final FAB 50 rankings?

All season long the mantra for the team at McEachern (Powder Springs, Ga.) was “We > Me”. In fact, the Indians wore that moniker on the back of their jerseys in their quest to capture a GHSA Class AAAAAAA state title. McEachern had plenty of talent and even more incentive. Event operators of GEICO Nationals, the end-of-the-season tournament scheduled for April 4-6 in New York City which has invited top independent programs and eligible state association champions to compete since 2009, we’re eying McEachern for bid in the 2018 tournament.

With an underclass-dominated club, McEachern was riding along at No. 4 in the FAB 50 until it came crashing down in a crushing 75-55 loss in the GSHA Class AAAAAAA quarterfinals to Norcross (Norcross, Ga.). There was to be no state championship and definitely no GEICO National berth, especially after Norcross lost in the state final and considering the fact the event has never invited a state association member program that didn’t win a state crown first. No. 4 was also McEachern’s preseason ranking in 2017-18.

In 2018-19, there was something different about this McEachern team, even though it lost some key personnel in the off-season. It was definitely focused and missing out on a state crown and a potential GIECO Nationals berth in 2018 played a major role in the team’s approach to the season. Putting mundane and individual priorities aside propelled this team to a season for the ages among Georgia teams. Prior to the first game, Omar Cooper, the father of star junior guard Sharife Cooper who coached at least six of the players on McEachern’s current roster since third grade at a local recreation league in Powder Springs, told Ballislife things “would be different this season” after the disappointment of last season.

Omar Cooper was spot on in his prediction, as McEachern won nine games versus current FAB 50 ranked clubs (and another three against previously ranked clubs) during the course of the season en route to the state title. McEachern didn’t lose and even if it did drop a regular season game playing that level of competition, a GEICO Nationals berth was on the radar because of its success against such a daunting national schedule.

“I think it’s always on your radar if your team puts itself in a position to be there,” McEachern coach Mike Thompson said of GEICO and it being part of his team’s goals this season.

The Indians rose from No. 16 in the preseason FAB 50 to its current No. 2 spot. As we stated in the preseason, had McEachern won the state title last year and/or in 2016-17 (the Indians lost in the state semifinals when they were ranked No. 9), it would have started in the top five this season and with its 32-0 record would in all likelihood be the No. 1 ranked team right now in from of La Lumiere (La Porte, Ind.), which began the season at No. 6. La Lumiere is currently 28-0 as it enters GIECO Nationals along with seven other FAB 50 ranked teams.

McEachern will not be one of those teams.

The 32-0 Indians were invited, but some of the team’s starters told USA Today’s Jason Jordan they would not be participating in the event. After giving so much focus to the team, some members were going to shift focus to individual goals, including Cooper participating and making a good impression at USA Basketball’s Next Generation Sunday as part of NCAA Final Four weekend in Minneapolis, which falls the same weekend at GEICO Nationals. After coach Thompson publicly said his team accepted the invitation following the state title win on March 9, McEachern (not the event operators) withdrew its invitation last Friday.

So what does McEachern’s absence mean for GIECO Nationals? For starters, it takes away what would have been without question the strongest field in the event’s history. It still arguably could be, as the team replacing McEachern is eight-time defending NIAA champ and FAB 50 No. 25 Bishop Gorman (Las Vegas, Nev.). The eighth-seeded Gaels open with top seed and FAB 50 No. 1 La Lumiere and are confident it can play with the Lakers, which beat them 67-54 during the regular season in a game Gorman coach Grant Rice feels is closer than the final margin indicates.

The event will continue to attract a strong field of independent programs and state champions, and there is a good possibility the 2018-19 mythical FAB 50 national champion will emerge from the event. McEachern has already defeated one team in the current GEICO field, No. 9 Sunrise Christian Academy (Bel Aire, Kan.) in overtime. McEachern will have a strong case to finish No. 1 should Sunrise Christian Academy win three games in New York. Ironically, McEachern was scheduled to face the Buffaloes before deciding to decline its invitation.

If top seed La Lumiere wins the tournament, it will naturally stay No. 1. It’s one of our main rankings criteria to not drop a No. 1 that hasn’t lost on the court, barring any unusual or unforeseen circumstance. Even in that case, it’s not likely to happen. Should No. 3 Montverde Academy win the tournament for the fifth time in seven seasons, it will have avenged its only two losses to La Lumiere or have won a tournament in which La Lumiere participated in. That’s a strong resume. As for No. 4 IMG Academy, to defeat three FAB 50 ranked opponents (none of which is likely to be ranked lower than No. 10), in addition to the six it defeated during the regular season, will have to be weighed against its sole loss to No. 6 Mountain Brook (Mountain Brook, Ala.). That’s a team McEachern defeated, 50-29, en route to the City of Palms Classic championship, a tournament the Ascenders participated in.

Should any of the bottom five seeds, sans Sunrise Christian Academy, win GEICO Nationals — Oak Hill Academy (Mouth of Wilson, Va.), Wasatch Academy (Mt. Pleasant, Utah), University School (Ft. Lauderdale, Fla.) or Bishop Gorman — the results and the resumes of each team will have to be closely examined before determining which team finishes No. 1 in the FAB 50.

Coach Thompson had an interesting take regarding his team’s situation as it relates to the final No. 1 ranking. “I really wouldn’t want that,” Thompson told the Atlanta Journal-Constitution in regards to finishing No. 1. “We earned what we did [the current No. 1 rankings] with our production during the year, but if you’re going to be a national champion, you need to go win that tournament.”

Two years ago, Nathan Hale (Seattle, Wash.) had an invite to the event after winning a state title and declined to participate. There was a few notable differences between Hale’s situation and the current McEachern situation. Nathan Hale never publicly accepted the invitation to participate. Obviously, the event’s operators and fans would have loved to see Michael Porter Jr. and company compete in the event that was eventually won by La Lumiere. The other main difference was Hale was No. 1 in the FAB 50 at the time, while La Lumiere was No. 2 entering the tournament with a 25-1 record. The team La Lumiere lost to 76-74 during the regular season, No. 21 Sierra Canyon (Chatsworth, Calif.), was a team Hale defeated, 67-65.

The decision was made not to hop La Lumiere over Hale in the final FAB 50 of the 2016-17 season. The main reason being the common opponent factor was so significant in that case because it involved an opponent in the No. 1 conversation itself for a portion of the season and was ultimately the two results that led to Hale’s ascension to No. 1 in front of La Lumiere’s preseason positioning of No. 2.

This season’s ranking scenario is a bit different, as McEachern stated its intentions, then reversed direction, while neither the Indians nor La Lumiere has suffered an on-court loss. Whatever the outcome is at GIECO Nationals, the FAN 50 national champion and the final FAB 50 order will be dictated by first and foremost the factor that matters the most, on-court results. The emotion of off-court moves and scenarios will be removed from the equation once the tournament begins.