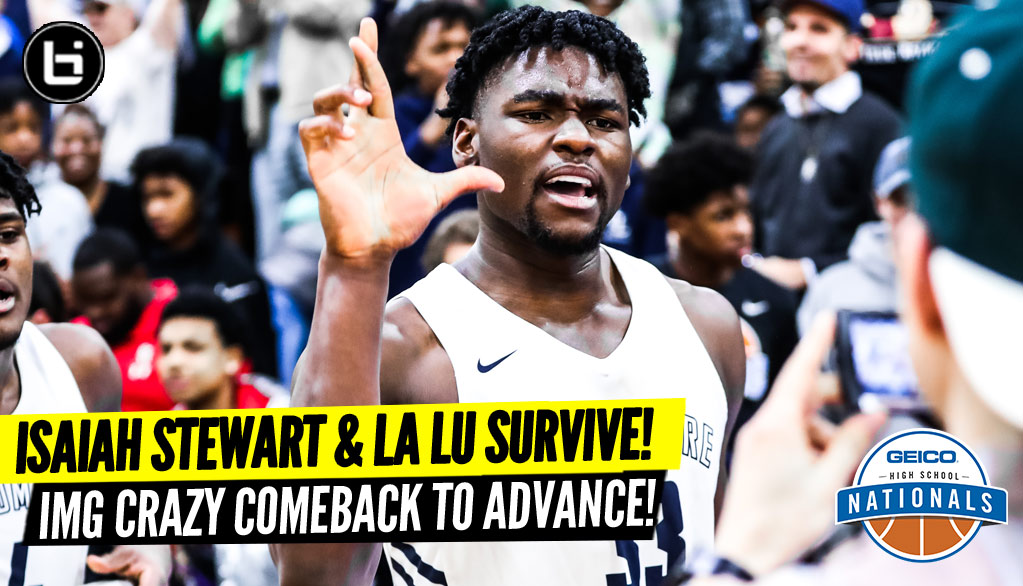 The GEICO Nationals championship game is set and it will be FAB 50 No. 4 IMG Academy taking on No. 1 La Lumiere at 12:30 pm ET (ESPN). IMG Academy had an incredible comeback and won its semifinal game on a dunk with five seconds remaining by forward Jeremiah Robinson-Earl. The top-ranked Lakers survived an upset scare as No. 17 Oak Hill Academy missed point blank attempts and a 3-pointer on its final possession. Read on for key facts and turning points in each semifinal game and a quick preview of what to expect in Saturday’s championship.

Quick Summary: The Ascenders trailed 25-8 after one quarter of play and 63-47 entering the fourth period, yet they somehow found a way to win the game. Coach Sean McAloon felt his team was fortunate to be down only eight points at halftime, as the star of the quarterfinal win over Sunrise Christian Academy, guard Jaden Springer, had played “a terrible first half,” according to his coach. IMG Academy pressed in the fourth quarter and got the Eagles out of their comfort zone, and Springer played a terrific final eight minutes, creating shots for himself or others. Still, Montverde Academy had the ball and a lead after Jeremiah Robinson-Earl (16 points, 9 rebounds) made one of two free throws with 36.7 seconds remaining as the Eagles held a 73-72 lead. The Eagles put the ball in Cade Cunningham’s hands and he threw a skip pass to Moses Moody (9 points), who missed a jumper that set up the winning basket. Montverde coach Kevin Boyle hoped for penetration since so many fouls were called in the game (28 for Montverde, 19 for IMG Academy).

Pivotal Moment: There was one key moment and one pivotal play in the game. IMA Academy went on a 17-1 run to begin the fourth quarter to tie the game at 64-64. The Eagles had some shaky ball-handling, were not finishing around the basket and tired a bit down the stretch. When Moody’s jumper came off long, IMG Academy’s Armando Bacot (8 points, 7 rebounds) whipped the ball out in front to a streaking Robinson-Earl who completed the game-winning, break-away jam with five seconds remaining over the out-stretched Harlond Beverly (23 points). It looked like Montverde Academy potentially was going to have a break-away basket of its own, as there was alot of commotion and celebrating after Robinson Earl’s dunk, but Boyle had called a timeout. Some of the IMG Academy players heard it, but kept playing because the players continued to run back the other way until everyone realized the referees were going to honor the Eagles’ timeout. Th Eagles didn’t get the clean look they wanted in the final three seconds.

Key Statistic: For the second consecutive game, Springer led the way for the Ascenders with 26 points, as he overcame a slow start to make key plays down the stretch. His production and decision-making was especially critical because starting point guard Noah Farrakhan only played 16 minutes after suffering from back spasms. In his absence, freshman Jarace Walker had eight key points and drew the fifth foul on Mcdonald’s All-American Precious Achiuwa (8 points, 7 rebounds) with approximately three minutes remaining.

Quotables: “I usually can talk alot, but I don’t know what to say about that,” McAloon said about the game’s ending and the comeback. “I’ve never been part of anything like that. These guys just don’t want to go home.”

What’s Next: IMG Academy moved to 30-1 on the season and will take on FAB 50 No. 1 and 30-0 La Lumiere for the GEICO Nationals title on April 6 at 12:30 pm ET (ESPN). IMG Academy shot 37 free throws in its one-point win over Montverde, while La Lumiere had a hand in limiting Oak Hill Academy to six free throws. IMG Academy will have to get the line and try to draw some fouls on the most physical team in the tournament. IMG Academy definitely has an advantage in the backcourt with quicker and more capable ball-handlers, so watch for the production and minutes of Farrakhan. McAloon won’t be afraid to sit him if he’s not productive, as the cocky New Jersey native actually told his coach not to put him back in the game when the Ascenders went on their fourth-quarter run versus Montverde.

Jeremiah Robinson-Earl CALLED GAME WITH THIS 😱😱@IMGABasketball with the comeback win over Montverde to advance to the #GEICONationals title game!@jre10_ pic.twitter.com/1YfLmbcC76

Quick Summary: Oak Hill took a 30-26 halftime lead and a 36-28 lead in the third quarter. That’s when Kentucky-bound Keion Brooks hit a 3-pointer and sparked a 9-0 La Lumiere run that gave the Lakers the lead. They took the lead on a offensive rebound putback by Mr. Basketball USA candidate Isaiah Stewart. The teams went back and forth thereafter, until La Lumiere took a 58-53 lead with 1:24 remaining, but Oak Hill fought back to get within range. The Warriors were aided by Wendell Green (4 points) and Gerald Drumgoole (12 points) both missing the front ends of 1-and-1 foul shot situations and some shaky La Lumiere ball-handling. The Warriors got within a point on a driving lay-up by Cole Anthony, but didn’t score again despite multiple chances.

Pivotal Moment: With 19.9 seconds remaining, Anthony drove straight to the basket, dished off to Kofi Cockburn (6 points, 11 rebounds) for the lay-up, but his contested attempt was just off and there was a major scrum for the ball. A held ball was called with 11.6 seconds remaining and Oak Hill retained possession. Anthony attempted a floater and it was a good look, but it was high off the rim and again a Cockburn tip-in attempt missed the mark. With 3.5 seconds remaining, Oak Hill got the ball out of bounds under its own basket and another chance for the winning basket. Coach Steve Smith drew up a perfectly executed out of bounds play, as Anthony delayed a cut to the basket, the defense rolled with him and to leave Cam Thomas (22 points, 10-26 field goals), the team’s best shooter, wide open for a corner 3-pointer in front of the Oak Hill bench. The rotation was good and the ball was straight, but it just rimmed off as Stewart secured the rebound and the dramatic win for the Lakers.

Key Statistic: Oak Hill shot 36 percent (24-of-67) from the field, while La Lumiere shot 47 percent (25-of-53), but still the Warriors had an excellent shot to win the game. Just a few point blank attempts at the end of the game were off. Anthony and Stewart, the top two candidates for Mr. Basketball USA honors, were in this game and Anthony made 4-of-16 shots from the field, including 1-of-9 from 3-point range. He finished with 11 points and nine assists. Stewart finished with 14 points, a game-high 16 rebounds and three blocked shots.

Quotables: “All the credit goes to our guys…we got a great cast that finds a way to win,” La Lumiere coach Patrick Holmes said. “As former coach Shane Heirman preached, we want to bring in a team, not accumulate talent. There is nothing pretty about our place, guys come in and learn to play tough and compete.” Stewart had another great game, but couldn’t bear to watch Thomas’ last-second 3-point attempt. “When the shot went up I closed my eyes,” Stewart said. “I was underneath the basket and just trying to get my hands on the rebound. I’m glad it didn’t go in and we lived to fight another game.”

What’s Next: The top-ranked Lakers improved to 30-0 on the season and will take on No. 4 IMG Academy (Bradenton, Fla.) for the GEICO Nationals championship on Saturday at 12:30 pm ET (ESPN). La Lumiere will be gunning to win its second GEICO Nationals title in three years, after the 2017 team won the tournament and finished No. 2 in the FAB 50. La Lumiere has out-rebounded both of its foes, and nobody has found a way to keep Stewart off the offensive glass. IMG Academy, however, has a deeper team and more speed in the backcourt so it will likely try to exploit those matchups. IMG Academy is the more talented team, top to bottom, but La Lumiere has found a way to win each outing so far this season. La Lumiere can’t expect to have a four-point quarter like it did versus Oak Hill Academy and win. The Lakers got to expect IMG Academy to shoot better, so Stewart will need to stay out of foul trouble and Brooks will need a big offensive game to off-set what IMG may be able to accomplish in the backcourt.