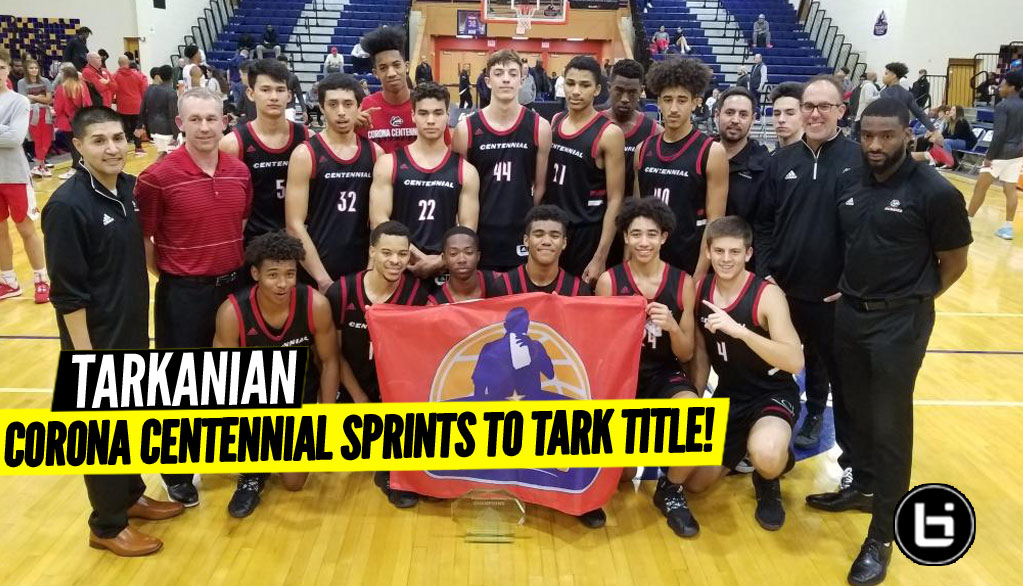 RELATED: 5 Things We Learned At Tark

When the 16-team Platinum Division field was announced for the 2019 Tarkanian Classic, it looked like Centennial (Corona, Calif.) was going to a solid first-round opponent for one of the tourney’s top seeds. By the time the brackets were announced, however, it was clear the Huskies were going to be a tough out for any of the top seeds, which happened to be FAB 50 No. 17 Neumann-Goretti (Philadelphia, Pa.). This was based on Centennial’s showing at its own BattleZone Tournament in late November, in which it defeated preseason FAB 50 No. 21 Rancho Christian (Temecula, Calif.) and gave Sheldon (Sacramento, Calif.) fits before falling, 74-67. In its first game in Las Vegas, Centennial indeed gave Neumann-Goretti all it could handle and was able to pull out a 68-64 win after trailing by five points with less than three minutes remaining.

Five days before the tournament began, Centennial defeated a Coronado (Henderson, Nev.) team that began the season ranked No. 41, 73-65. When Coronado won its first round game and saw that Centennial had gotten past Goretti, the Cougars were highly-motivated for a little payback. What transpired, however, showed that Centennial was going to be a force to be reckoned with in this bracket, as it rolled Coronado 83-48. Using its guard dominant, sprinting with and without-the-ball style, Centennial knocked off two more FAB 50 ranked teams to take home the Tarknian tournament title to become the fourth California program to win the prestigious tournament since it began in 2012.

In the tournament semifinals, Centennial pulled away down the stretch from No. 19 Mater Dei (Santa Ana, Calif.) and won 63-53. It wouldn’t be denied against host and No. 5 Bishop Gorman (Las Vegas, Nev.) in the title game, as the Gaels were unable to rattle Centennial’s ball-handlers or keep them from getting in the key, as the Huskies recorded a 71-55 victory.

Centennial (10-2) took a 29-18 halftime lead and got a big boost when senior Freddie Dybala hit a 3-pointer right before the halftime buzzer. Gorman (7-1) battled back to tie the game at 31-31, but Centennial freshman guard Jared McCain hit a 3-pointer to make it 34-31. Gorman eventually took a 35-34 lead, but the Huskies stormed right back and went on a 10-2 run to take control of the game.

One of Centennial’s two losses was to No. 27 Sheldon (Sacramento, Calif.), and it looked like Centennial might have a rematch with a team it lost to earlier in the season. Sheldon was in control against Bishop Gorman in its semifinal contest, until the Gaels outscored the Huskies, 19-5, over the course of the final 2:25 to defeat Sheldon, 76-66. Gorman was hoping to rattle Centennial with its pressure defense as it did to Sheldon a game earlier, but when the Gaels were unable to make the Huskies uncomfortable with the ball, Centennial was able to make enough shots and rebound well enough to hold off Gorman the rest of the way.

The catalyst for Centennial was senior point guard Paris Dawson, who wore down Gorman with his relentless attacking with the ball, clutch shooting and on-court leadership. The Portland St.-bound point guard scored a game-high 27 points, including 5-of-11 shooting from 3-point range. Named the tournament’s Most Outstanding Player, Dawson averaged 21.5 ppg for the tournament and scored 22 points in the big first-round win over Neumann-Goretti. The Saints didn’t lose another game and went on to win the consolation championship with a 79-75 victory over Skyridge (Lehi, Utah).

Paris Dawson (@parisdawson19) is named @TarkClassic MOP after leading Centennial (Corona, CA) to 4 wins over highly-ranked teams while scoring 21.5 ppg. Guys can’t stay in front of him or speed him up & when that jumper is WET 💦, it’s over. Portland St. got a WINNER! 🔥 pic.twitter.com/tb0Ce7VSS9

Dawson took it upon himself to take that leadership role after two standouts and three potential starters left the program before the season began, including D1 recruit Jaylen Clark and UC-Irvine-bound D.J. Davis. Those moves made the Huskies smaller and younger, but it also made them faster and quicker. Centennial sprints and cuts as well as any team we’ve seen so far this season. Gorman was worn out by Centennial’s style and when the Huskies shot as well as they did, the result was a major tourney championship.

“All I thought was ‘next man up,'” Dawson said. “After D.J. left, I sat down and talked to coach (Josh Giles) about doing what had to be done to lead this team. I know what I can do, plus we have young guys who can play. That’s the good thing about this team.”

Dybala (eight points, eight rebounds vs. Gorman) was named all-tournament as was McCain, who netted 12 points in the championship game. For the tournament, McCain averaged 17.2 ppg, including 30 in the first game against Neumann-Goretti.

Will McClendon, a 6-foot-4 junior, was named all-tournament for Bishop Gorman, as was junior point guard Zaon Collins and senior forward Mwani Wilkinson. McClendon scored 17 points in the title game while Collins finished with seven points, five rebounds and eight assists. Both scoring outputs were the lowest of the tournament for the Gorman juniors, as McClendon averaged 21.5 ppg while Collins averaged 12.8 ppg and 9.3 apg. Wilkinson had 13 points and 15 rebounds in a losing effort versus Centennial.

Sheldon bounced back from its heart-breaking loss to Bishop Gorman in the semifinals to defeat Mater Dei in two overtimes, 70-62, in the Platinum Division third place game. Arizona St.-bound Marcus Bagley scored 23 points to place Sheldon (which defeated Centennial 74-67 on November 29) before injuring his ankle in the second overtime. Bagley averaged 23.5 ppg and was named all-tourney, as was Mater Dei’s Kentucky-bound point guard Devin Askew.

Not only does Centennial’s title run look good for Neumann-Goretti, it also bodes well for Harvard-Westlake (North Hollywood, Calif.), which handed Centennial its other loss in a game the Huskies hosted, 63-50. Harvard-Westlake, unranked in the FAB 50, is 12-0 entering the Beach Ball Classic in South Carolina where it opens up the post-season Christmas tournament with FAB 50 No. 36 Poly (Baltimore, Md.).

Bishop Gorman attained its lofty preseason national FAB 50 ranking based on its returning perimeter firepower and having two big men, both whom are no longer part of the program. If Gorman fares well at the Les Schwab Tournament in Oregon after Christmas, the Gaels won’t fall too far in the next FAB 50 update because they do own a win over a team (Sheldon) that handed Centennial one of its two losses. Gorman could face Mater Dei in the title game of that tournament. As for Centennial, the Huskies are leaving for the King Cotton Tournament in Pine Bluff, Arkansas on Christmas night. Giles got a nice early Christmas present by winning the Tarkanian Classic for the first time, something that he began to see was a possibility in early November.

“Our guys play with a chip on their shoulder and have a great work ethic in practice,” Giles said. “We got after it in the weight room and I knew we were going to be alright. I’m really happy and proud of this group.”