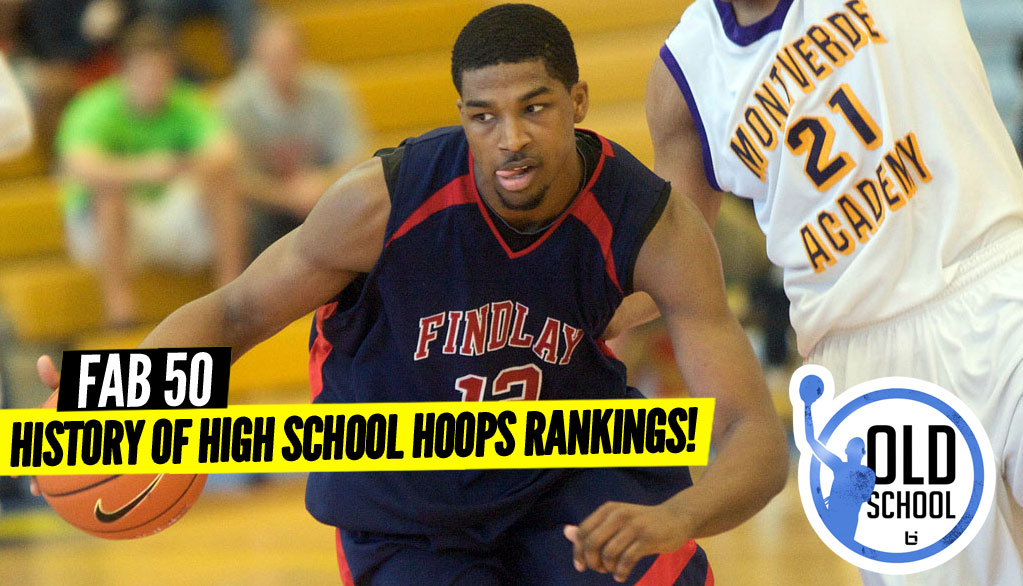 Newspaper distribution and the Internet created greater interest in national rankings, but in actuality, United States high school basketball rankings began in 1959. Multiple national polls have been compiled for decades including the FAB 50, which is now the longest running weekly national rankings in the country.

Newspaper distribution and the Internet created greater interest in national rankings, but in actuality, United States high school basketball rankings began in 1959. Multiple national polls have been compiled for decades and it’s surprising how many of them have been touched, started or influenced over the years by editors and contributors of the FAB 50, which is now the longest running weekly national rankings in the country after USA Today ceased publication of its rankings in December 2019.

There is no doubt the USA Today Super 25 national rankings, which began in the fall of 1982, helped popularize national high school rankings around the country in both boys basketball and football. Reports in late December 2019 that USA Today was no longer employing a high school sports department sent shockwaves through the industry and hit the high school basketball community pretty hard.

The high school sports landscape (and the coverage of it), is always changing and evolving, but for many players over the years, playing on a ranked team or making one of USA Today’s All-American teams was, in many instances, the highlight of their athletic career.

It’s ironic the rankings started for the 1982-83 school year because this year’s team at Montverde Academy (Montverde, Fla.) could go down as one of the best of all-time (certainly since the advent of weekly polls) provided it finishes undefeated. Should that happen Montverde Academy will undoubtedly draw comparisons to the 1982-83 Dunbar (Baltimore, Md.) team that eventually produced three long-time NBA players: Muggsy Bouges (the captain and leader), Reggie Williams (that year’s Mr. Basketball USA) and the late Reggie Lewis (a fringe contributor who went on to be a NBA All-Star). That team started out as the first preseason No. 1 by USA Today and finished with a 31-0 record and is the standard by which all high school teams since are judged against.

Weekly rankings were around before USA Today’s version hit the mainstream in their popular Tuesday edition and were compiled by the individual who first compiled the Super 25: La Porte, Ind.-based National High School Hall of Fame writer Dave Krider, who passed on the Fourth of July, 2018. Krider published rankings for Basketball Weekly beginning with the 1974-75 season and mainly served hoops aficionados and junkies.

A major problem developed with the Basketball Weekly rankings in that first year of publication.

“It was my first year doing national rankings and the publisher and I had a dispute over my payment, so I never got to publish my final rankings,” Krider told Ballislife.com in 2015. “I would have put Kashmere No. 1 after Verbum Dei lost.”

That season Verbum Dei (Los Angeles), with future NBA players Roy Hamilton and David Greenwood, was riding a 39-game winning streak and being talked about as California’s best team ever. It all came crashing down when the Eagles lost to Palos Verdes (Calif.), led by future NBA center Bill Laimbeer, 61-58, in the CIF Southern Section 4A semifinals. Verbum Dei finished 28-1 and is listed as Basketball Weekly’s “mythical” national champions because of the publishing dispute.

Kashmere (Houston, Texas) finished 46-0 and was named national champion by the National Sports News Service and is considered one of the best teams in Texas history. The late Art Johlfs, a Minnesota multi-sport high school coach and official, originated his National Sports News Service in 1959 when he decided to rank boys teams on a national level at the end of the season.

Because of the Krider-Verbum Dei-Kashmere dispute, we always look at the 1975-76 season as the beginning of modern weekly national rankings as you see them today with a preseason poll and weekly updates until after the final game of the season. That season, a fine Male (Louisville, Ky.) team, led by All-Americans Darrell Griffith and Bobby Turner, started out as preseason No. 1, but finished ranked No. 26 at 29-2 after failing to repeat as state champions.

High school boys basketball national ratings, and mythical national champions, have been around for a century.

In fact, the “mythical” tag wasn’t appropriate during the 1920’s when Amos Alonzo Stagg, the legendary football coach, organized a National Interscholastic Basketball Tournament at the University of Chicago. Titles were decided on the court, not by subjective rankings.

The first event in Chicago was staged in 1917, but dropped for two seasons because of World War I, before being staged from 1920-30. The first truly national event was held in 1923 when 40 teams from 30 different states, many of them state champions, competed.

The tournament was discontinued after 1930 following a ruling by the National Federation of State High School Associations (NFHS). Many states then refused to send a representative. The event was replaced with the Stagg Christmas tournament.

Chicago was also home to a National Catholic Interscholastic Tournament at old Alumni Hall on the Loyola University campus from 1924-41. The tourney was discontinued after private schools were allowed to join some state associations, including Illinois, in 1941.

A national tournament for segregated Black high schools was held from 1929-1967. The host was Hampton, Va., Institute from 1929-34 before it shifted to Tuskegee, Ala., from 1935-41. Tennessee State in Nashville, Tenn., played host from 1945-65 with the final two events played at Phillips High in Montgomery, Ala. Interestingly enough, the “Negro National Championships” were held 13 years following the landmark United States Supreme Court case, Brown vs. Board of Education, handed down on May 17, 1954.

Jolfs retroactively named national champions going back to 1952 in boys basketball and in football back to 1910. He added other sports through the years, including girls basketball in 1975, before retiring in 1978 and passing the torch to the late Barry Sollenberger of Tempe, Ariz.

Sollenberger was a sports historian-journalist who published Arizona high school magazines beginning in 1971 and edited Joe Namath’s National Prep Sports Magazine in 1976-77. In 1999, he became the first official sports information director for the Arizona Interscholastic Association (AIA) and at that time turned over the National Sports News Service to National High School Sports Hall of Fame writer Doug Huff of Wheeling, W. Va. Sollenberger continued on with the AIA until his sudden death from a heart attack in 2005.

The National Sports News Service then became connected to Huff’s work in national rankings. Beginning with the 1987-88 school year, the nation’s first national weekly poll of sportswriters for boys basketball (and football) joined the field when Huff spearheaded the National Prep Poll. It was distributed over the Associated Press and many other major outlets by World Features Syndicate. It also was used for nine years by ESPN’s Scholastic Sports America and was the first national rankings to add regional polls.

In 1999, Huff joined Student Sports Inc., a company led by Palos Verdes, Calif. native Andy Bark, and compiled the first FAB 50 rankings for FOX Sports Net along with Student Sports Magazine editor Mark Tennis. Those rankings, which expanded the regional breakdowns, evolved into the Student Sports FAB 50 for the 2001 school year and current Ballislife.com National Grassroots Editor Ronnie Flores collaborated with Huff and Tennis on the weekly rankings from that season on. The FAB 50 was published on the Fox, Student Sports, and Rivals.com platforms until 2008, when Student Sports’ event division and media group was purchased by ESPN. The FAB 50 lived on ESPN’s various platforms, including its television broadcasts of high school basketball, until the media giant discontinued its high school coverage in 2012.

Beginning with the 2012-13 season, Flores spearheaded the FAB 50 and it is now under his direction. Huff is now retired from daily and weekly sports writing and sports editing duties, while Tennis focuses on Cal-Hi Sports, which has been in publication since September 1979.

With USA Today no longer publishing rankings, the FAB 50 is now the longest-running weekly rankings beginning under Huff’s leadership in the fall of 1987 (as the National Prep Poll). The FAB 50 was published on the Ballislife.com platform beginning with the 2015-16 season.

MaxPreps.com also publishes weekly national basketball rankings, which it began for the 2008-09 season with Krider as compiler. In addition to computer rankings devised by Ned Freeman, the website also offers its Excellent 25, which was compiled after Krider by Jason Hickman, then Lynden Ostrander and currently by Jordan Divens.

After Krider left USA Today for a Boston-based Internet start up named Highwire.com in 2000, USA Today’s Super 25 was compiled by Christopher Lawlor, followed by Jim Halley and lastly by Jason Jordan.

The National Prep Poll name was revived by Jamie DeMoney and continues on PrepNation.com, which the Waukee, Iowa-based writer and Scouting Director launched in August of 2001.

National rankings also serve as a friendly reminder of the prowess of players during their high school years once they go on to higher levels of the game. As stated earlier, for those that may not be future college or NBA standouts, playing on a ranked team is often the pinnacle of their athletic career and something they are often proud of years later. It’s also a great tool to decipher between elite high school players and those who became great players later on.

Debates about who’s No. 1 nationally are always fun, and in the early years of weekly national rankings many teams in the Top 10 of the final rankings were often undefeated. That’s simply no longer the case, as elite high school basketball is truly a national game. No matter where their teams are placed in subjective rankings, the wide-ranging recognition for the athletes and coaches involved is well-intentioned.

Boys basketball rankings are the most “pure” of the national rankings, since there are more measuring sticks and barometers to base judgments and team positioning because of all the national level tournaments doing the holidays, in addition to GEICO Nationals to conclude the season.