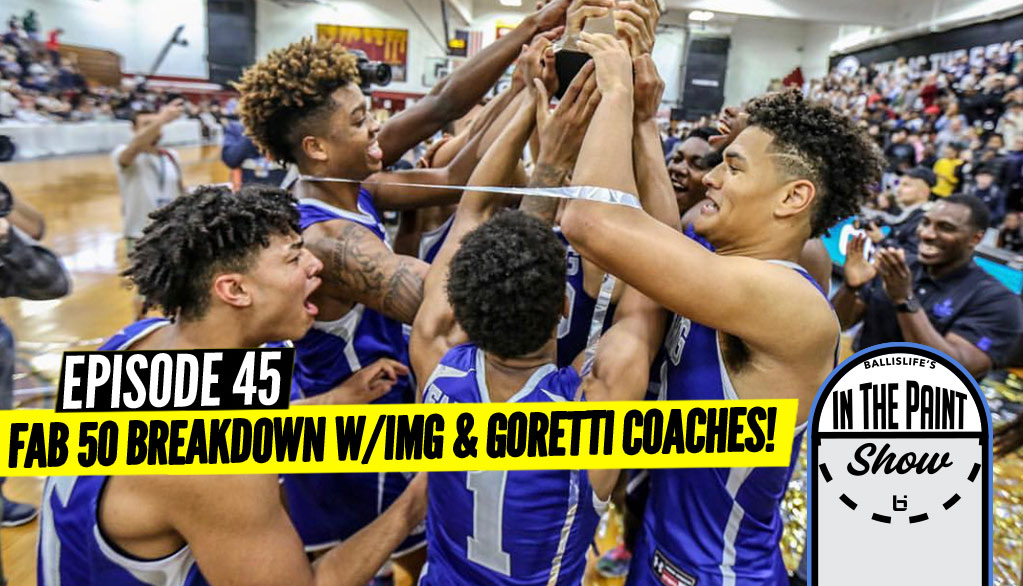 In episode No. 45 of our  "In The Paint Show,"  Ron and Dev go hard on the recently-released 2019-20 preseason FAB 50 rankings with special guest coaches Sean McAloon (of No. 1 IMG Academy of Florida) and Carl Arrigale (of No. 16 Neumann-Goretti of Pennsylvania).

“In The Paint” Podcast GOES IN with FAB 50 Coaches!

In episode No. 45 of our  “In The Paint Show,“  co-hosts Devin Ugland and Ronnie Flores go hard on the preseason 2019-20 FAB 50 National Team Rankings with special guest coaches Sean McAloon (of No. 1 IMG Academy of Florida) and Carl Arrigale (of No. 16 Neumann-Goretti of Pennsylvania).

Before our guests join us, Ron breaks down the origins of the FAB 50, how he begins the process of building the preseason rankings, and what is the hardest aspect of compiling a credible poll before the games begin. Dev also gives some insight on the teams that have the most to prove and lose among the preseason ranked teams.

McAloon, the head coach of defending FAB 50 champ and preseason No. 1 IMG Academy (Bradenton, Fla.), gives the inside scoop on this season’s squad and what he expects from his ultra-talented roster. Arrigale jumps on the show to break down the roster of one of Philadelphia’s best programs, which we rank as the team to beat in the competitive Philly Catholic League over No. 35 Archbishop Wood and No. 42 Roman Catholic. Arrigale breaks down his team’s strengths and weaknesses and what he’ll find out about his team when it competes at the Tarkanian Classic in Las Vegas during the holidays.