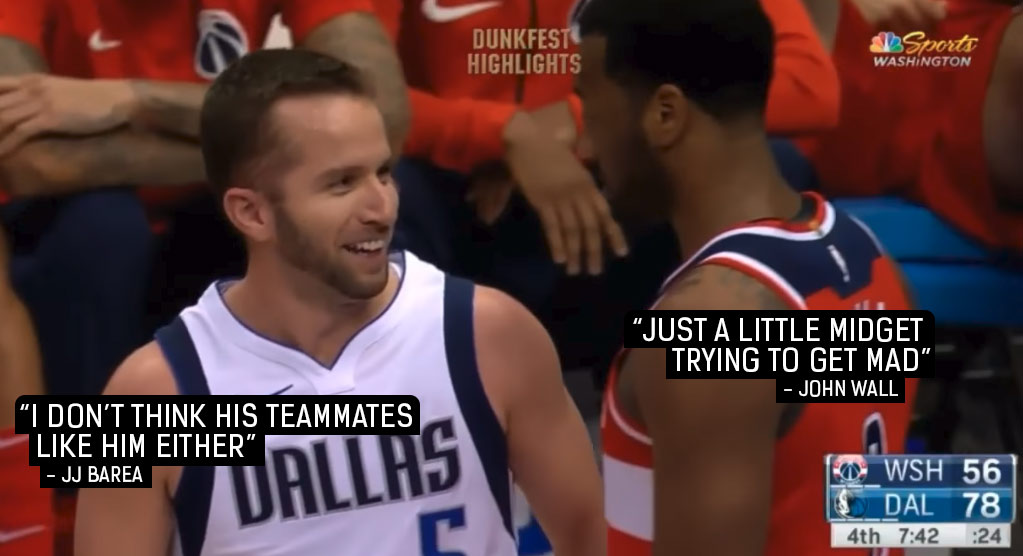 Up by 22 with seven minutes left in the Mavs 98-75 victory against the Wizards, J.J. Barea was called for an offensive foul and then hit ...(Read more)

Up by 22 with seven minutes left in the Mavs 98-75 victory against the Wizards, J.J. Barea was called for an offensive foul and then hit with a tech for trash-talking a very serious looking John Wall. When asked about the interaction after the game, Wall said, “It was cool. It was funny. Just a little midget trying to get mad out there. I paid him no mind.”

As expected, the 6’0″ “midget” was told about Wall’s comments.

“Now I have somebody in the NBA that I don’t like,” Barea said after initially laughing off the comment. “That’s my first. I don’t like him at all now. But I don’t think his teammates like him, either. So it’s nothing new for him.”

And here’s Barea’s account of the interaction between him and Wall.

“So I turn around, and we’re looking at each other,” said Barea, who had a smile on his face when the on-court discussion with Wall started. “I think he’s going to say — what I would do? — ‘My bad’ or something. But he didn’t say that. He was like — I’m not going to say the bad word — ‘What are you gonna do?’ I was like, ‘What?’ So you know, I had to say some stuff back, and he never changed his mind.

The chippy game also featured some trash talking between rookie Dennis Smith Jr and Bradley Beal as well as the obnoxious Salah Mejri getting ejected after picking up two techs (one for each point he scored) for arguing with the refs.

The best part about that video was watching Coach Rick Carlisle tell Mejri to get the fuck out of the game.

Anyways, let’s check out some other moments that makes Barea such a love him or hate him player.

BYNUM (JJ MADE THE SHOT!)