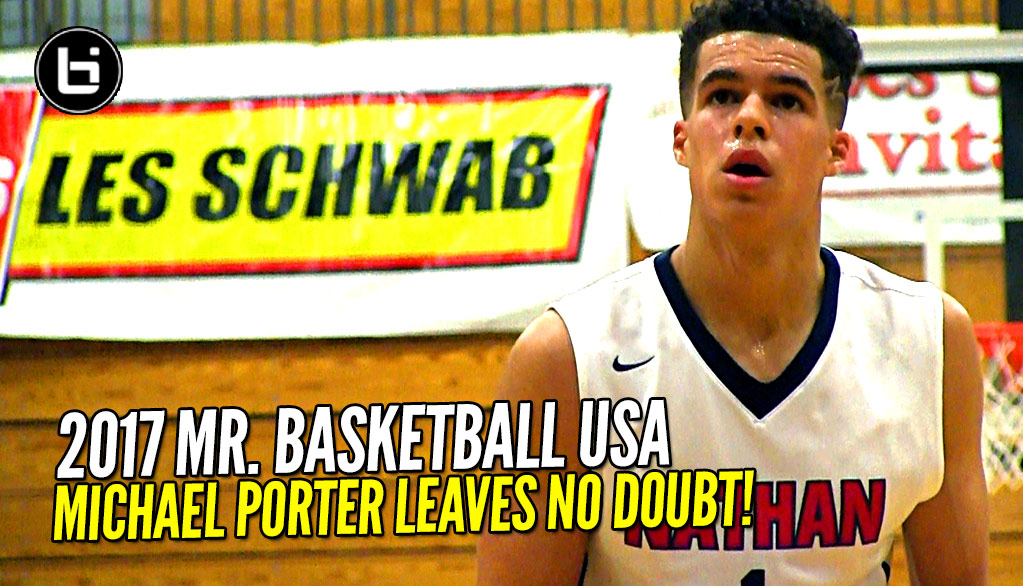 Versatile forward from FAB 50 No. 1 Nathan Hale (Seattle) named 2017 Mr. Basketball USA by Ballislife.com. Porter Jr. is the first-ever selection from the state of Washington, but will return home to Missouri for what likely will be one season of college basketball.

Winning is obviously a big factor when it comes to naming a national player of the year, and at all levels of basketball one player can change a team’s fortunes. The latter was clearly was the case at Nathan Hale (Seattle), which went 3-18 during the 2015-16 season. The off-season saw returning second team All-American Michael Porter Jr. transfer into the school from Father Tolton (Columbia, Mo.), and to say he made a big impact would be an understatement.

Hale started out FAB 50 ranked, but very few, if any, predicted Hale would end up as mythical national champions. Behind the play of the 6-foot-9 silky smooth forward from Columbia, Missouri that’s what happened, as Hale became the first team ever team from the state of Washington to earn the FAB 50 national champion tag. Just as Hale earned a lofty status no other team from the Pacific Northwest ever has, Porter’s individual production on an unbeaten team earns him an honor no other Washington player has ever achieved: the title of 2016-17 Mr. Basketball USA.

Porter led Hale to a 29-0 record by averaging 37.6 ppg, 14.5 rpg and 5.2 apg and coming through when the Raiders needed him most in their big games. The presence he brought to the court was a factor in his selection, as no matter the opponent, Porter was the best player on the floor in each game.

“It’s a dream come true,” said Porter when officially informed of his selection as 2016-17 Mr. Basketball USA. “I’ve been grinding so hard and it’s rewarding to see my hard work pay off in ways like these.”

“Michael was what as a coach I called the impossible matchup,” said Rainier Beach (Seattle) coach Mike Bethea, whose fellow Metro League club lost to Hale three times during the season. “Six-foot-10 with a 8-foot wingspan and Michael Jordan type skills….shoot, handle the ball, post game…Most of the time seemed bored on the court. You have to understand if he would have been in college last year he would have been the best player in college no doubt. The game is easy for him. When he gets bigger and stronger, I don’t even want to think about how scary he’ll be.”

Porter, who teamed with younger brother Jontay Porter on this year’s Hale team while being homeschooled, is the first-ever Mr. Basketball USA from the state of Washington and the third consecutive honoree to emerge from the No. 1 ranked team in the FAB 50. Last season it was 6-foot-6 point guard Lonzo Ball of 35-0 and FAB 50 No. 1 Chino Hills (Calif.) and in 2014-15 6-foot-9 forward Ben Simmons of FAB 50 champ Montverde Academy (Fla.) earned the nation’s most prestigious honor. Ball’s and Simmons’ impact on an unbeaten, championship team was the determining factor and it’s a similar situation for Porter.

Porter will return to the Midwest for college at Missouri following the firing of his godfather Lorenzo Romar at the University of Washington, where he initially committed. While there was some controversy in Hale’s No. 1 final ranking, there was absolutely no controversy in the selection of Porter, as he joined Simmons as the only two players ever to earn a perfect 100 points in the Mr. Basketball USA Tracker since we have been tracking the nation’s top players using a distinguished 10-man panel of top basketball scouts 10 years ago. Ball edged out Josh Jackson of Prolific Prep (Napa, Calif.) by basically earning six first place votes to his four. Both are expected to be taken among the top five picks in the 2017 NBA Draft, while Porter is expected to be one of the top picks in 2018.

While he has Midwest roots, Porter will forever be linked to the state of Washington and, interestingly enough, no other player from the state has even been a finalist dating back to the 1954-55 season. Missouri’s only Mr. Basketball USA honoree is Crystal City’s Bill Bradley. The 6-foot-5 forward and future NBA player, Rhodes Scholar and U.S. Senator was honored for the 1960-61 season after ending his career at Crystal City with 3, 068 points.

This is the second consecutive season a player from a West Coast program is honored as Mr. Basketball USA. Prior to Ball’s selection last season, Minnesota Timberwolves’ small forward Shabazz Muhammad of Bishop Gorman in Las Vegas was the first West Coast player to earn the honor in 16 years at the conclusion of the 2011-12 season.