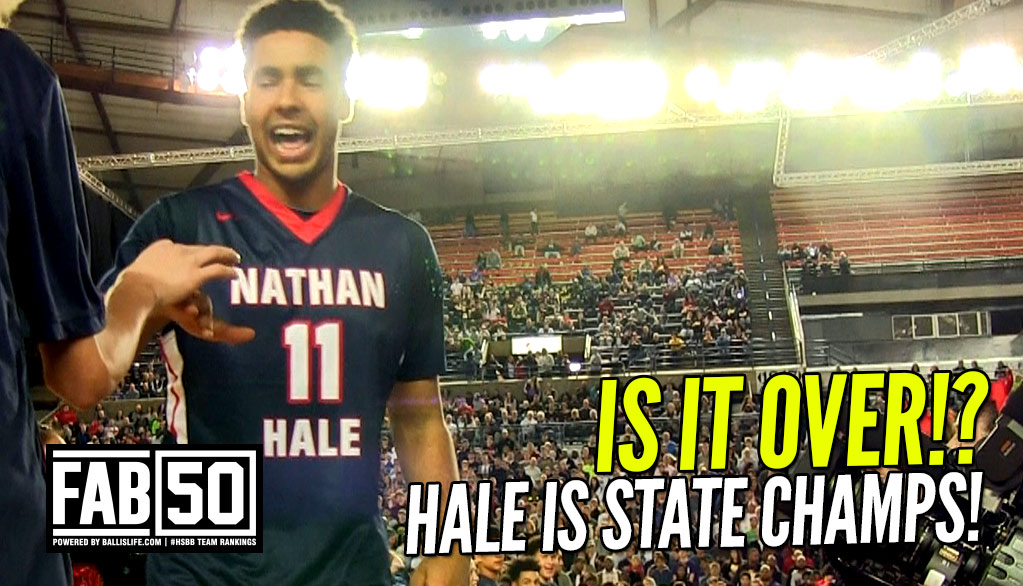 Teams are beginning to wrap up their season and a few in the new edition of the FAB 50 National Team Rankings powered by Ballislife.com captured a state ...(Read more)

Teams are beginning to wrap up their season and a few in the new edition of the FAB 50 National Team Rankings powered by Ballislife.com captured a state title in the past week. One of the state-title winning clubs was No. 1 Nathan Hale (Seattle, Wash.), which won the WIAA Class 3A crown with a fourth win over Garfield (Seattle, Wash.). But is the season over for the Raiders? We examine the other teams likely to be invited to Dick’s Nationals in New York set for March 30 – April 1 in New York City.

In the latest edition of the FAB 50 National Team Rankings powered by Ballislife.com, teams that have completed their 2016-17 season are marked with an asterisk (***). For some teams at the top of the rankings, a state crown has been secured but there is not yet an asterisk. The reason being is there is a good possibility they will join some of the nation’s top independent programs to compete at the eight-team Dick’s Sporting Good National High School Tournament at Christ the King (Middle Village, N.Y.) beginning March 30.

One of the teams without the asterisk is WIAA Class 3A state champion and FAB 50 No. 1 Nathan Hale (Seattle, Wash.), which defeated regionally-ranked Garfield for the fourth time this season in the title game. Michael Porter Jr., the Mr. Basketball USA front-runner, scored 27 points and grabbed 17 rebounds in the 68-51 victory.

WIAA state champions have been invited to Dick’s Nationals since the conclusion of the 2013-14 season and Hale is going to receive an invitation. Despite premature media reports to the contrary, it will be a surprise if the Raiders are not in the Big Apple to defend their No. 1 rankings against some of the nation’s best teams.

Other Dick’s Nationals eligible teams that compete for a state crown that have wrapped up the hardware are No. 16 Shadow Mountain (Phoenix, Ariz.), the unbeaten AIA Class 4A state champions, and No. 22 Greensboro Day (Greensboro, N.C.), the NCISAA Class 3A state champs.

Top independent clubs in line for a berth include No. 2 La Lumiere (LaPorte, Ind.), No. 5 Montverde Academy (Montverde, Fla.), No. 6 IMG Academy (Bradenton, Fla.), No. 13 Findlay Prep (Henderson, Nev.) and No. 14 Oak Hill Academy (Mouth of Wilson, Va.). If those eight teams were to make up the event field, it would be the strongest overall boys’ field in the event’s nine-year history.

Georgia On Our Mind

GHSA member schools in Georgia are also Dick’s Nationals eligible, but with previous No. 9 McEachern (Powder Springs, Ga.) losing to new No. 32 Tift County (Tipton, Ga.) in the Class AAAAAAA semifinals, 56-49, the Peach State’s best bet would be new No. 26 Norcross (Norcross, Ga.) provided it wins the state crown.  Tift County handed McEachern its only loss of the season and also knocked out previous No. 31 Newton (Covington, Ga.) from the post-season in the Elite Eight, 75-66.

The Blue Devils will take on Norcross in the AAAAAAA state title game on Saturday at Georgia Tech University. Norcross (whose Mascot is also the Blue Devils) is the highest rated FAB 50 newcomer this week at No. 26. Two Georgia schools were among the four that dropped from the national rankings, but Norcross shoots up as some of its regular season wins now loom bigger and make it a strong Dick’s Nationals candidate.

Norcross began the season ranked No. 41 in the FAB 50 and had a few tough local losses to knock them from the rankings, but coach Jessie McMillan’s club does own a victory over No. 27 Greenforest Christian Academy (Decatur, Ga.) and No. 29 Mae Jamison (Huntsville, Ala.), the Alabama Class 5A champions. Norcross’ losses to No. 6 IMG Academy (62-59) and to No. 17 Brentwood Academy (58-56) are not looking too shabby, either.

The result of the AAAAAAA final will determine if McEachern and/or Newton appear in the final rankings, as the overall season resume is considered more strongly for the final FAB 50 of the season. McEachern’s only loss of the season was to Tift County and that team was the only one on Newton’s schedule it wasn’t able to defeat.