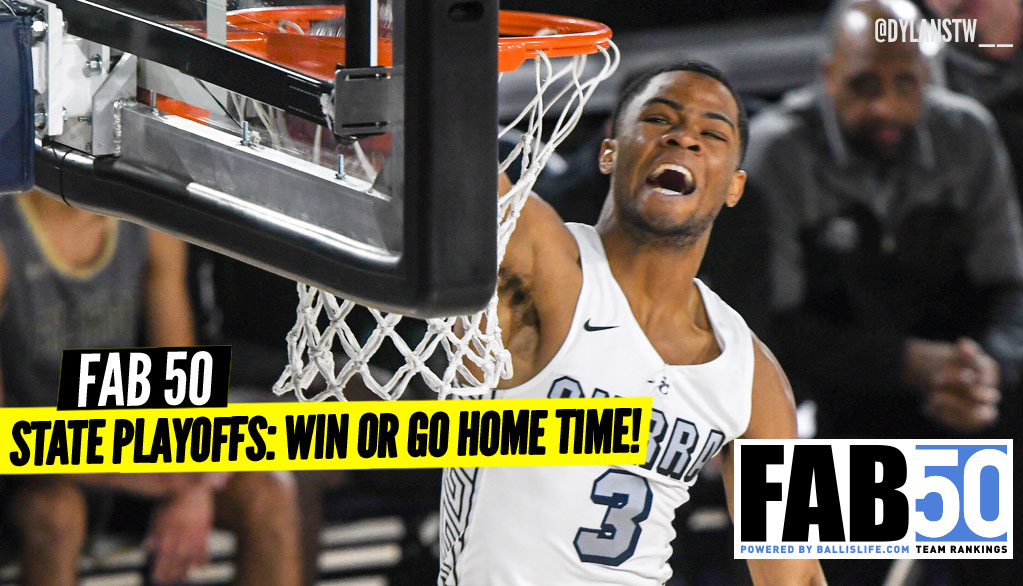 Sectional and regional playoffs are wrapping up, and as state tournaments tip-off all around the country, some highly-regarded teams will see their season come to an end in the next week or two. The highest-rated team to win a state title so is No. 14 Shadow Mountain of Arizona.

Sectional and regional playoffs are wrapping up, and as state tournaments tip-off all around the country, some highly-regarded teams will see their season come to an end in the next week or two. The highest-rated team in the latest FAB 50 National Rankings powered by Ballislife.com to win a state title so far is No. 14 Shadow Mountain (Phoenix, Ariz.), but its season may not be over yet as teams angle for a spot in the GEICO Nationals Tournament to conclude the season. There is one newcomers this week, as unbeaten Haverford School (Haverford, Pa.) makes a big splash in at No. 43.

Playoffs formats in various states can sometimes be confusing for fans of the national high school scene to follow, as there are some that conduct regional and sectional playoffs with pool play or double elimination formats where a losing team can bounce back in the state tournament. We’ve reached the point where various governing bodies are conducting their state tournaments, so coaches and teams are now in “Win of Go Home” and “Survive and Advance” mode that all fans of the FAB 50 National Team Rankings powered by Ballislife.com understand. You either win and advance to the next round, or lose and risk tumbling down in the FAB 50.

One team that has captured its state crown is Shadow Mountain (Phoenix, Ariz.), which won the Arizona Interscholastic Association (AIA) Class 4A state crown with a dominant 64-38 victory over Deer Valley (Glendale, Ariz.). The Matadors, which lost only one game in state to Nico Mannion and his bubble club at Pinnacle (Phoenix, Ariz.), knocked off a game Salpointe Catholic (Tucson, Ariz.) team in the state semifinals, 77-71.

Shadow Mountain’s season may not be done, as the four-time defending state champions look to receive an invite for the third consecutive season to the end-of-the season GIECO Nationals in New York City (April 4-6). One of the Matadors’ losses is to FAB 50 No. 2 McEachern (Powder Springs, Ga.). The top four seeds could conceivably be the top four teams in the FAB 50, with one caveat. McEachern must win the GHSA Class AAAAAAA state crown in order to be eligible. Should the Indians capture their first state crown, four of the eight invites would be fairly obvious, with Shadow Mountain in contention for one of the coveted four remaining spots.

McEachern will face Peachtree Ridge (Suwanee, Ga.) in a state quarterfinal game on Wednesday and could potentially face a Norcross (Norcross, Ga.) team in the state semifinals it lost to by 20 points in last year’s state tournament that ended their 2018 GEICO Nationals hopes.

The lone newcomer to this week’s rankings is also a state champion, as Haverford School (Haverford, Pa.) breaks in at No. 43 after wrapping up an unbeaten campaign with a 67-62 overtime win over Westtown School (West Chester, Pa.) in the Pennsylvania Independent Schools Athletic Association (PISAA) championship game. Junior guard Jameel Brown led Haverford School with 24 points while Christian Ray and Jameer Nelson Jr. added 17 points apiece.

Since Westtown School handed No. 40 Roman Catholic (Philadelphia, Pa.) one of its four losses, we considered putting the Fords higher in the FAB 50 than the Cahillites, but the latter must still get credit for their win over No. 12 Imhotep Charter (Philadelphia, Pa.) and may face No. 26 Abington (Abington, Pa.) in the Class 6A state playoffs. Roman Catholic plays La Salle College (Wyndmoor, Pa.) for the Philadelphia Catholic League title on Monday night.

Another team playing a big game on Monday night is No. 20 Gonzaga (Washington, D.C.), which faces St. John’s (Washington, D.C.) in the Washington Catholic Athletic Conference (WCAC) championship game at American University. Gonzaga defeated No. 21 Paul VI (Fairfax, Va.) in the semifinals, 63-55, for the first time in three tries this season, while St. John’s upset previous No. 5 DeMatha Catholic (Hyattsville, Md.) 53-52 in the other semifinal.

All four teams are not done with their seasons just yet, and DeMatha Catholic still gets rankings credit for beating St. John’s two out of three times, splitting games with Gonzaga and beating Paul VI in both regular season WCAC meetings.