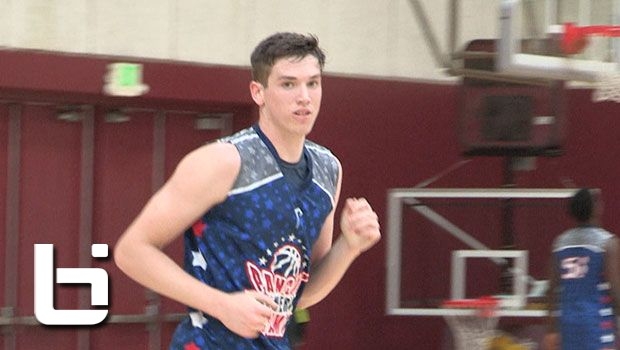 The 13th Annual Pangos All-American Camp continued on Saturday as the participants look to put themselves in position to be selected for Sunday’s Cream of the ...(Read more)

The 13th Annual Pangos All-American Camp continued on Saturday as the participants look to put themselves in position to be selected for Sunday’s Cream of the Crop All-Star Games. We take a look at some of the camp’s top Saturday performers, including rising junior shooting guard Ethan Thompson, who turned in the best shooting performance of the camp so far on Saturday afternoon.

The top overall performer in terms of dominance at his position is Mustapha Heron of Sacred Heart (Waterbury, Conn.). The 6-foot-5, 200-pound uncommitted shooting guard (he de-committed from Pittsburgh during his junior season) stands out among with his scoring ability, confidence, and the inability of any defender to stop him from getting to the spot he wants on the floor.

It’s always tough to follow in the footsteps of a father or an older brother who played the game at a high level. For Ethan Thompson, a 6-foot-3 shooting guard at Bishop Montgomery (Torrance, Calif.), it’s a double dose of expectations and comparisons. His father, current Oregon State assistant coach Stevie Thompson Sr., starred at Crenshaw (Los Angeles) and Syracuse and got a cup of coffee in the NBA. This past season, Ethan’s older brother Stevie Jr. was one of California’s best players. The duo helped Bishop Montgomery win a CIF Division IV state title in 2014 and Stevie Jr. will join his father in Corvallis, Ore. in the fall.

Ethan, a junior-to-be, has a thin frame similar to his brother, but is taller and will be bigger and stronger by the time he’s a senior than Stevie Jr. was. The comparisons to bigger brother are inevitable, but Ethan is forging his own identity on the grassroots circuit. He took a big step in that direction with arguably the best individual offensive performance of the Pangos Camp so far.

Ethan made 11-of-13 shots from the field, including 5-of-5 3-pointers, to finish with 27 points in his team’s 81-74 victory. He added three assists and three rebounds.

Ethan is a deadly shooter off the catch and when his feet are set. He has an innate ability to find the open spot on the court, but still needs more work shooting off the bounce and exploding to turn the corner off his first step. Ethan also makes no bones about what he’s learned from his older brother — and what he does better than him.

“Stevie did not let other people get him out of his game and I learned that from him,” Ethan said. “I’m trying to play an all-around game and not just be compared to him. I’m try to show I’m a good athlete. He shoots floaters good, but I finish around the basket better and finish better through contact.”

We take a look at some of the camp’s top Saturday performers who are trying to keep pace with Heron (listed alphabetically):

Rawle Alkins, Christ the King (Middle Village, N.Y.) 6-5 2-016 G: The New York contingent at the Pangos Camp performed well on Saturday. Alkins is also pushing Heron as the player the talent scouts on hand talk about as the camp’s most dominant perimeter performer. When he doesn’t settle for jumpers, he can dominate on the offensive end and is a crafty passer. Alkins can change direction with the ball well and defenders often back away from him in transition because of the physicality.

Alkins is open for college and is looking to see what personnel changes and defections the schools he’s interested in will have at the conclusion of the 2015-16 season. That obviously translates into a spring announcement for the CTK standout.

Alkins may not return to CTK because of the eligibility issue regarding a brief stay at a school in Florida before enrolling at the New York parochial school in ninth grade. He feels its a “50/50” chance he can restore his eligibility and stated he would like to return to the program for his senior season. Our New York contacts with insight to the situation say the chances of him returning are less than 50 percent.

T.J. Leaf, Foothills Christian (El Cajon, Calif.) 6-9 2016 F: Last season’s CalHiSports.com Division II State Player of the Year shined in an afternoon game with 18 points on 7-of-12 shooting from the field. He nailed both of his two 3-point attempts and added six rebounds. Leaf has a multitude of offensive moves around the basket and can attack in either direction. Leaf does need to work on his shooting on the dribble, but does utilize a quick release without brining the ball low on the catch. Lead also does a good job of keeping the ball high on rebounds and his intangibles, such as cheering for teammates, is also a great asset to his skill package.

Nate Morris, Lancaster (Lancaster, Texas) 6-10 2016 C: This post player has been one of the hardest workers on the defensive end in camp. He attacks ball-handlers off hedges, loves to contest shots at the rim and also has the rundown block in his repertoire. Morris runs the floor hard, but offensively needs to work on his initial post move off the catch. Last season he played alongside Texas A & M recruit Elijah Thomas, a consensus to 50 recruit, and the practice experience has proved to be invaluable.

“It was a grind everyday in practice,” Morris said. “Elijah is a great player, one of the best players in the country, and I learned to compete with the goal to be as good as him or better. I learned my weaknesses and he’s kind of like a brother to me now.”

Omari Spellman, MacDuffie (Springfield, Ma.) 6-8 2016 F: This true four-man is a load underneath and knows how to use his broad shoulders (6-foot-9, 270-pounds) to create space and leverage. He was finishing well in traffic on Saturday and most importantly, knows what he is. He hit for 10 points and four rebounds on Saturday afternoon.

Isaiah Washington, St. Raymond’s (Bronx, N.Y.) 6-0 2016 G: Spellman’s teammate on North Carolina State had a big 25-point outing in the game in which Ethan Thompson went off. Washington has good touch (10-for-10 free throws) and is a good shooter who excels at penetrating and getting to the teeth of the defense. He is susceptible to over-dribbling, as some New York-bred point guards tend to do, but he’s an instinctual player who cannot be faulted too much for that in a camp setting. He tries to emulate former Utah Jazz legend John Stockton.

P.J. Washington, Findlay Prep (Henderson, Nev.) 6-8 2017 F: An unselfish power forward, Washington is an underrated passer. He makes his presence felt on the offensive — even when he’s not a focal point. Washington was finishing strong around the rim on both Friday and Saturday afternoon before leaving early to participate in USA Basketball’s 3-on-3 exhibitions. The fact he decided to come to Pangos Camp before fulfilling his other obligations shows something about his competitive nature.