The 2015 Pangos All-American Camp concluded on Sunday with the Cream of the Crop All-Star games and it wasn’t just the MVP’s who make an impact on the game. Mustapha Heron and Rawle Alkins joined a distinguished list of Pangos Campers to be named Most Outstanding Player. The shooting guards were named co-MOPs of this year’s event. 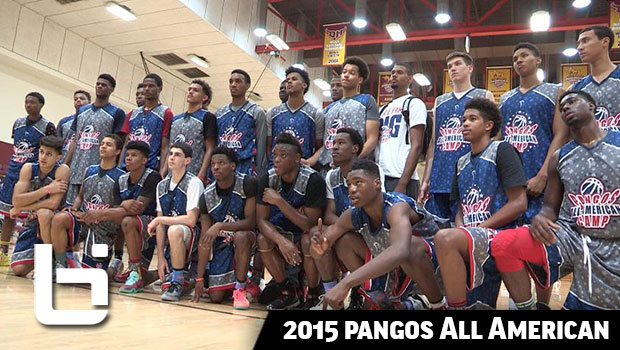 The theme at this year’s Pangos All-American Camp was parity. In terms of national talent, it was one of the deepest camps in the event’s 13-year history. While there wasn’t a top five 2016 national prospect that used the nation’s top independent showcase camp to solidify his national ranking (as has been the case in recent years), there was a plethora of Top 35-80 types that helped their national profile over the three-day event.

When the dust settled, the player that immediately put his imprint on every camp game he played, along with the one who arguably was the most consistent throughout, were named Pangos Camp co-MOPs.

The impactful player was 6-foot-5 shooting guard Mustapha Heron of Sacred Heart (Waterbury, Conn.). With the physical nature to his offensive attack, defenders were at Heron’s mercy all weekend, as he scored at will around the basket and overpowered bigger, secondary defenders. Heron, a senior-to-be, needs to improve his shooting consistency and flat trajectory, but there is no denying his impact on the game. The most skillful shooting guard was 6-foot-5 Rawle Alkins of Christ the King (Middle Village, N.Y.). The powerful New Yorker can score, and potentially dominate, inside, outside, in the half court or in transition.

In the Pangos Camp Cream of the Crop Top 30 game for the event’s best players, Heron scored a game-high 20 points on 5-of-10 shooting from the field. He also had five rebounds and made 9-of-10 free throws. Alkins, like Heron a member of the 2016 class, dominated the first half as his Gray team rolled to a 94-87 victory over the Blue team. Alkins finished with 15 points on 7-of-11 shooting in one half of play before he had to leave to catch his flight back home.

“The top players, we kind of all know each other; I haven’t seen Rawle play like that, but he’s the real deal,” said Top 30 game team MVP Trae Young of Norman (Norman, Okla.).

Young’s deep jump shooting ability was on full display in the Top 30 game, as he made 3-of-6 3-pointers and scored 13 points to go along with four assists. The 6-foot-2 junior-to-be was named co-team MVP of the wining Gray team along with another 2017 prospect — 6-foot-10 power forward Mohammed Bamba of Westtown (West Chester, Pa.).

For the Blue team, 6-foot-10 power forward Taurean Thompson of St. Anthony (Jersey City, N.J.) was MVP. He closed out a fantastic weekend with 16 points while converting all of his shot attempts from the field. The senior-to-be was 2-of-2 from 3-point range and 6-of-6 from the field. The only shot he missed was one free throw and he also grabbed a team-high six rebounds.

Thompson’s performance was a microcosm of his weekend. He converted quality field goal attempts at as high of a rate as any player in camp. More importantly, Thompson didn’t jack up poor shots as players had a tendency to do in spurts this weekend. Thompson is a finesse four-man with a good jumper who can take his game to the next level if he improves his triple threat game. If he learns how to drop his inside shoulder off his first step, Thompson’s slight frame will become less of a factor.

Mohammed Bamba Closes Out With A Bang

Joining Young and Thompson as Cream of the Crop Top 30 game MVP was Bamba, one of the camp’s most intriguing prospects. He made 6-of-8 shots from the field to finish with 14 points and seven rebounds.

Legendary national scout Brick Oettinger of the ACC Sports Journal felt Bamba, a native of Harlem, New York, was the best long-term prospect in camp. It would be hard for us or any other longtime Grassroots basketball observers to come up with a strong argument against that sentiment. The 6-foot-10 junior-to-be felt more comfortable as the camp went along and if it ran for a few more days, we have little doubt many in attendance would have felt he was the best prospect.

Bamba particularly excels at the defensive end, with good instincts, incredible timing and a good grasp of defensive concepts. On the offensive end, Bamba puts his length to good use to finish around the basket. He handles it well enough that he doesn’t have to be a true post-up man and though his jumper is a work in progress, his shooting form is solid.

“I think I did pretty well,” Bamba said of his Pangos performance. “Me, Omari Spellman and Bryce Aiken, we all came out here on a mission to prove we were better than a lot of the players. What I wanted to do personally was put my team in the best possible position to get stops. There were a lot of good ball-handlers, so eventually they were going to get by their defender.”

Bamba, who plays for the PSA Cardinals 16s on the Nike EYBL circuit, ended up at Westtown on the recommendation of his travel ball club coaches. He stated it’s still early for him in the recruiting process and that after his junior season he would have an idea of which schools will be the better fits.

Joining Bamba, Young and Alkins as double digit scorers for the winning Gray team were 2017 prospects Brandon McCoy, a 6-foot-11 center from Morse (San Diego, Calif.), and Billy Preston, a 6-foot-9 small forward from Prime Prep (Dallas, Texas). McCoy had 12 points and a game-high eight rebounds while Preston had 13 points.

For the blue team, Heron and Thompson were the only two players in double figures.

Every year, arguments can made about Cream of the Crop Top 60 participants that should have been chosen for the Top 30 game — or players not chosen at all that should have made the second. With the depth of this year’s Pangos Camp, it was not an easy task to select the all-star game participants.

The player who stood out during camp games as the one who should have played in the Top 30 game was 6-foot-9 senior-to-be Mamadi Diakite of Blue Ridge School (Dyke, Va.). He didn’t play particularly well in the Cream of the Crop Top 60 game, but he was one of the most athletic forwards in attendance and will be rated among the Top 25 camp performers by GrassrootsHoops.net. He had a big-time dunk in the Sunday morning session and can really get up to snatch rebounds.

Diakite is just scratching the surface of his potential. A native of Guinea, Diakite has a soccer background and has only been in America for a year and four months. Both of his parents hover around 6-feet, but he has a grandfather who stood over 7-foot.

“I saw a lot of stuff at this camp I have never seen in my life,” Diakite said. “The camp was good, but at times the players were trying to show off. It got me frustrated because I have a lot more ability than I showed.”

Diakite has offers from programs such as Virginia, Virginia Tech and South Carolina with the Cavaliers the leader to land his services.

Cream of the Crop Top 60 Highlights

Cassius Stanley, a rising ninth-grader reportedly set to attend Harvard-Westlake (North Hollywood, Calif.) and one of the most athletic wings in the camp regardless of class, was named Top 60 game MVP. The 6-foot-4 2019 prospect made 7-of-8 field goals to finish with 17 points for the Blue team in its 105-100 win over the Gray team.

Teammate Harrison Henderson, a 6-foot-10 center out of South Grand Prairie (Grand Prairie, Texas), also made 7-of-8 shots for the winning club. Henderson finished with 16 points and we felt outside of Diakite he had the strongest argument to play in the Top 30 game.

For the Gray team, Christian Popoola Jr., a 6-foot-3 junior-to-be from Lone Peak (Highland, Utah), scored a game-high 18 points. He also was recorded as making 7-of-8 shots from the field.