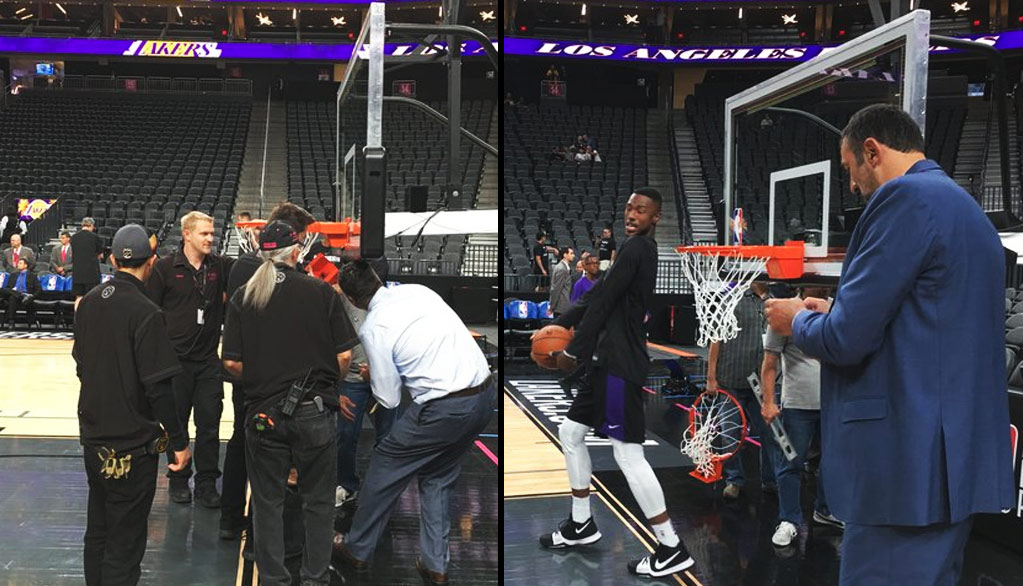 Before Sunday’s game against the Lakers, 40-year old Vince Carter dunked so hard during a pregame shoot around, he loosened one of the T-Mobile arena rims. The above photo of the officials working on the rim was taken by ESPN SportsCenter’s Coley Harvey. In the photo caption, he wrote, “the sound of the rim caught everyone’s attention nearby. When we saw who it was…no one was shocked.”

What makes me feel like a real old man is when I think back to the last time I remember talking about Vince Carter damaging a rim: 20 years ago, back in December of 1997 — the same month rookie De’Aaron Fox was born and during the pregnancy of Harry Giles’ mother!

The date was December 29th, 1997 (10 days after Fox was born) in Daytona Beach, where mayor Bud Asher gave Carter a key to the city and declared Sunday “Vince Carter Day” two days earlier. The game was between North Carolina and Bethune-Cookman, a school that offered Carter a band scholarship. Carter and Antawn Jamison came out on fire, making 13 of their first 15 shots, while the Wildcats missed 30 of their first 40. Five of Carter’s first six buckets were all ESPN SportsCenter worthy dunks that were made better by the late great Stuart Scott. One of those dunks by the 215-pound junior even left the rim hanging down as if a 300-pound Shaq just did his trademark logo on it.

The homecoming dunk show by Carter unfortunately ended early after a BC player accidentally hit Carter in the face, knocking a contact lens out of his eye and bruising his nose. He finished the game with 18 points on 6-of-7 shooting and was now 37-of-52 over his last five games. Without Vince to finish the game, the Tarheels squeaked by with a 51-point victory.

Since all of the NBA basketball goals were “Shaq-proofed” during the Vinsanity years, Carter never did get to shock any NBA fans by breaking a rim in a game. But, during the 2000 NBA Dunk Contest, he did shock the world by executing the first elbow hang on the rim (aka The Honey Dip) dunk seen by most basketball fans.