Sami aka @S_Universal hates both the Clippers and the Rockets and since he’s a Lakers fan with pretty good seats at GM4, he couldn’t resist heckling former Laker Dwight Howard who didn’t appreciate Sami’s “don’t cry” comments. Howard responded by telling Sami to “come out here” as if  he was going to do something to him if he was somehow able to come onto the court.

Sami obviously didn’t and Dwight didn’t do much against the opposing players who were on the court.  Howard finished with just 7 points (3-7 fg, 1-6 ft), 6 rebounds, 6 fouls and 2 techs in 18 minutes.

“I get emotional when I’m playing in the playoffs and I want to win so bad,” Howard said. “It’s frustrating at times, but I just have to try my best to keep my cool.”

At least he didn’t end up on this poster dunk attempt by Blake. 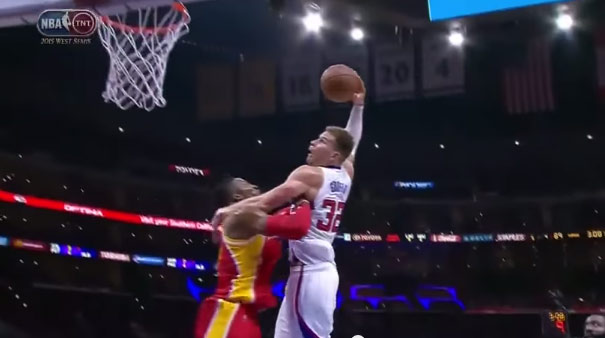