Since his All-Rookie 2nd Team appearance, he has increased his scoring, rebounding, assists, steals and blocks every season and finished his fourth season with averages of 23 points, 8.8 boards, 5.4 assists, 1.9 blocks and 1.6 steals a game — good enough to land him on his first of many All-Star teams and a All-NBA 2nd Team appearance. He’s also now listed at 6’11, 217 pounds. 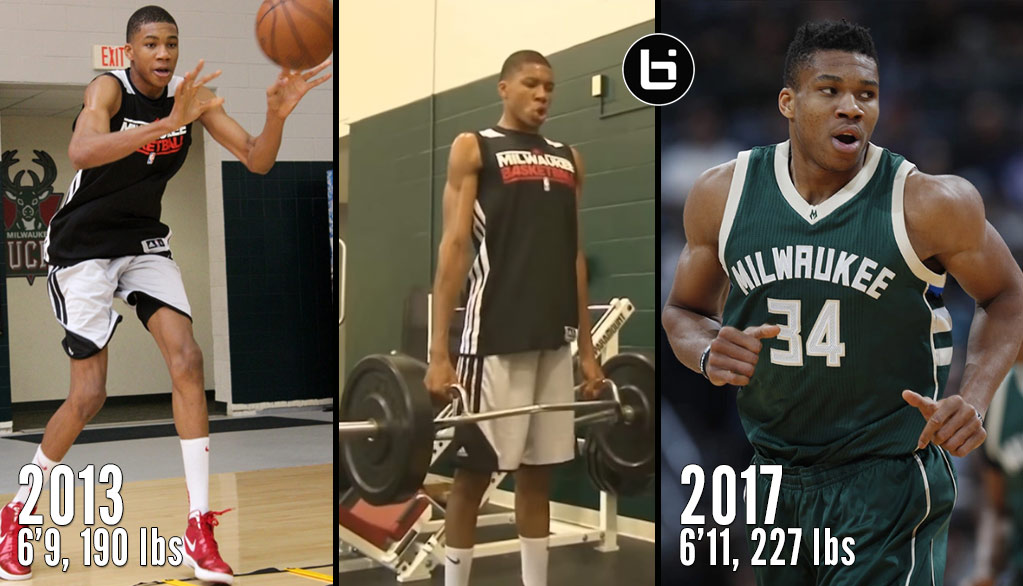 If you aren’t motivated enough, here’s two great stories about the “7-foot point guard” who recently signed a $100 million extension.

Via Sports Illustrated about working out after losses.

He storms out of the Bradley Center in full uniform, from home locker room to player parking lot, and hops into the black Explorer the local Ford dealer lent him. He turns right on North 4th Street in downtown Milwaukee, steers toward the Hoan Bridge and continues six miles south to the Catholic seminary in St. Francis, where the priests pray and the Bucks train and The Freak dispenses his rage. Alone, Antetokounmpo reenacts the game he just played, every shot he clanked and every read he missed. Sometimes, he leaves by 1 a.m. Other times, he stays until three, sweating through his white jersey for a second time. “I get so mad, and if I go right home, I’m afraid I’ll never get that anger out,” Antetokounmpo says. “This is how I get the anger away.”

Via The Vertical about his childhood.

He lived through horrific poverty and family illness and the most rudimentary of basketball infrastructures in Greece.

Within the shadows of the Acropolis, out on the sidewalks of downtown Athens, Giannis sold pencils and trinkets and plastic sunglasses. For hours and hours as young teens, Giannis and his old brother, Thanasis, had to push themselves to raise money for the dinner table. On the way home, they stopped at the market and grabbed the essentials. Their father worked two jobs, and their mother had a stretch of illness.

“We would be out on the street together, selling a toy, a watch, something, and we’d raise $10,” Thanasis told me once. “And that is good, because we didn’t starve today. We’re going to go home. We’re going to have something to eat. And it is a good day.”