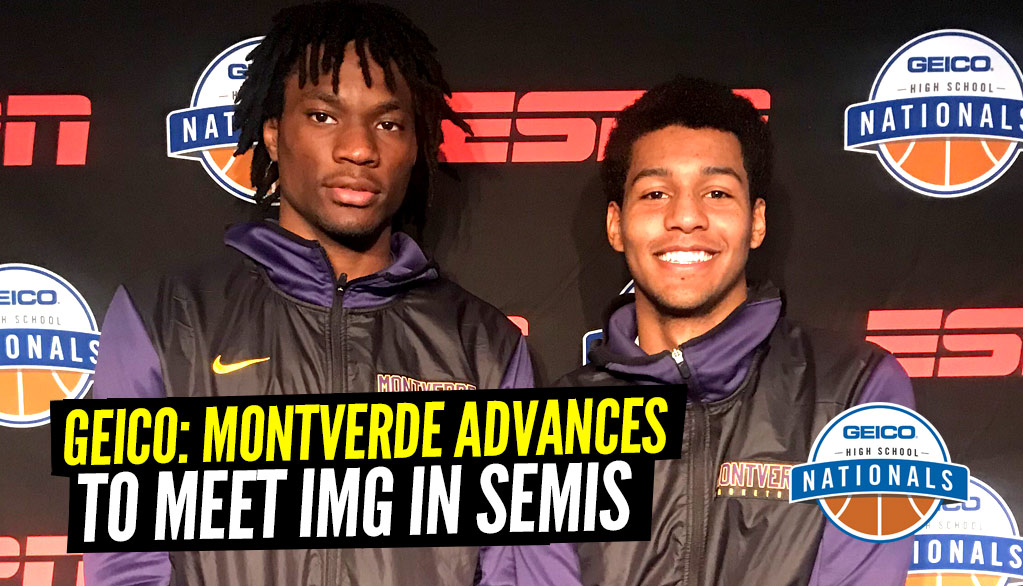 The semifinals are set for GEICO Nationals in New York, as the favorites in all four games won Thursday’s quarterfinal matchups. It will be FAB50 No. ...(Read more)

The semifinals are set for GEICO Nationals in New York, as the favorites in all four games won Thursday’s quarterfinal matchups. It will be FAB50 No. 3 Montverde Academy facing No. 4 IMG Academy in one semifinal (3 pm ET, ESPN2) and No 1. La Lumiere taking on No. 17 Oak Hill Academy in the second semifinal (5 pm ET, ESPN2). Read on for key facts and turning points in each game and a quick preview of what to expect in the semifinals.

Quick Summary: The Ascenders came in focused and forced 18 turnovers, many which they converted into points on the other end. IMG Academy got its first win at the event after being upset in the first round two years ago by Greensboro Day (Greensboro, N.C.). As coach Sean McAloon noted, however, the current coaches and players weren’t part of that, but they still used that loss as motivation.

Pivotal Moment: The score was 31-23 at halftime with IMG Academy leading, but the Ascenders were not satisfied. In fact, Ascenders’ shooting guard Jaden Springer was not happy with point guard Noah Farrakhan for his jovial attitude going into the halftime locker room. Their small flare up fired up IMG Academy, which opened up the second half with a 9-0 run, highlighted by a 3-pointer by Farrakhan that gave his team a 40-23 lead.

Key Statistic: Springer and Farrakhan combined to shoot 17-of-25 from the field and combine for 45 points, as IMG Academy’s backcourt dominated the scoring department. Springer (26 points, 11-14 field goals) was the beneficiary of many of the turnovers, converting them into dunks and layups. Uncommitted guard Grant Sherfield was the only player in double digits for Sunrise Christian Academy with 13 points.

Quotables: “We made a real concerted effort to focus on the defensive end,” said McAloon. “I think we really frustrated them on that end.”

What’s Next: IMG Academy moved to 29-1 on the season and will take on 22-2 Montverde Academy in a semifinal showdown on April 5 at 3 pm ET (ESPN2). It will be a battle of the No. 3 and No. 4 ranked teams in the FAB 50. There will be an impressive amount of talent on the floor, but whatever team can execute the best and get off to a quick start will advance to the finals.

Quick Summary: This was a rematch of last year’s GEICO Nationals title game and University School came out fired up. The USchool led early, 11-4 and 17-13, at the end first period. It wasn’t a good omen for the Sharks when Montverde Academy led 31-26 at halftime, as MVA coach Kevin Boyle felt his team was very sluggish and did not play well after the long lay-off (last game on February 9). Montverde Academy picked up its overall defense in the second half and did a better job of pressuring the ball-handlers.

Pivotal Moment: University took a 42-41 on an offensive rebound put back dunk by Scottie Barnes (12 points, 11 rebounds) early in the fourth period, but the Eagles went on a 17-0 run (after trailing 44-43) to take a 60-44 lead and essentially put the game away. University School got some baskets late, but the Eagles were firmly in control.

Key Statistic: Senior point guard Harlond Beverly made 9-of-11 field goals, including 2-of-2 3-pointers, and scored a game-high 25 points. He made some dagger shots to keep University School at bay and picked up the shooting slack for Moses Moody and Cade Cunningham, who combined to convert only only 1-of-8 3-point attempts. Beverly had a key lay-up and 3-pointer during the 17-0 run. Duke-bound Vernon Carey had 15 points and 11 rebounds for University School despite not being 100 percent because of a nagging ankle injury.

Quotables: “We were really rolling when the (regular) season was over,” said Montverde Academy coach Kevin Boyle, whose program improved to 20-4 all-time at the event with the win. “We played rusty, but alot of teams do in the first round. We were a bit stale, and we’ve got to be sharper in order to win tomorrow. Today shows we have to be come ready to play everyday.”

What’s Next: The 22-2 Eagles face FAB 50 No. 4 IMG Academy Friday (3 pm ET, ESPN2) in a highly-anticipated semifinal showdown. Montverde Academy will have to get better offensive plays from Moody and Cunningham and key minutes from Omar Payne to pull out the victory.

Quick Summary: Both teams were familiar with each other and Bishop Gorman came in loose and confident, having replaced FAB 50 No. 2 McEachern (Powder Springs, Ga.) in the event. The Gaels gave a valiant effort, but a couple of weary 3-pointers in the second overtime spelled doom. Gorman made 13 3-pointers, while La Lu made five, but the Lakers gutted out the win by making a few key lay-ups, including an offensive rebound put back by Gerald Drumgoole to give the Lakers a 72-69 lead with just under a minute remaining in double overtime. Bishop Gorman, which was out-rebounded 44-28, turned the ball over with 44 seconds remaining.

Pivotal Moment: With 14.5 second remaining in regulation and the shot clock running out, Kentucky-bound Keion Brooks nailed an off-balance 3-pointer to give the Lakers a 59-56 lead. With 4.5 seconds remaining, Gorman sophomore guard Will McClendon tied the game and sent it to overtime with a 25-foot 3-pointer. Gorman made big 3-pointers throughout the second half to keep itself in the game, as the Gaels’ foot speed and ball movement gave La Lumiere some trouble. Their 3-point attempts in the second overtime were mostly short on the rim, as both teams gre tired.

Key Statistic: The 3-point shooting favored Gorman in a big way, but it’s hard to ignore La Lu shot 35 free throws (and made 23) and the Gaels shot seven (and made six). The key for the Lakers’ was Mr. Basketball USA candidate Isaiah Stewart (25 points) making all 11 of his attempts, including some crucial ones down the stretch, to make up for the fact guard Wendell Green Jr. (19 points) made only 7-of-15.

Quotables: “I feel like we’re the most battle-tested team in the tournament,” Stewart said. “I feel like we’ve been there and we play our heart out.” La Lumiere head coach Patrick Holmes echoed those sentiments. “Can’t say enough about our big guy making all 11 of his free throws; when push comes to shove, we made the plays.”

What’s Next: The Lakers improved to 29-0 on the season and will take on No. 17 Oak Hill Academy (Mouth of Wilson, Va.) in the second semifinal Friday (5 pm ET, ESPN2). La Lu didn’t shoot well from the outside in this game, but Oak Hill Academy is aware the Lakers are capable of shooting it well from the outside. La Lumiere’s coaching staff is happy with how the players competed and the team’s senior leadership at critical moments versus Gorman.

Back in his home state, @The_ColeAnthony reminds everyone that he is, in fact, a bucket. 💯 pic.twitter.com/WZ1hW2sqkU

Quick Summary: Oak Hill Academy was the only lower FAB 50 ranked team to win, but that’s because the Warriors didn’t have a great regular season. They were simply not healthy and only lost one game with their regular starting lineup in the game. Oak Hill Academy was seeded higher in the event in the 4 vs. 5 matchup and were in control for most of the ballgame, taking a 19-14 lead after one period and leading 43-37 at halftime. Despite some sloppy play by both teams, Oak Hill Academy coach Steve Smith was pleased with his team’s effort.

Pivotal Moment: With 1:08 remaining in the game, Oak Hill’s Christian Brown (12 points) made a tough baseline shot to give Oak Hill a 75-70 lead, as Wasatch was hanging by making bit shots of its own. After Richie Saunders (4-4 field goals) made a pull-up jumper with less than 30 seconds remaining, Oak Hill’s Cole Anthony made two free throws with 23.7 seconds remaining to give Oak Hill a 77-72 lead and the cushion it needed to close out the game.

Key Statistic: Oak Hill is a different team when Anthony is healthy, and he got to the basket on many occasions and had the outside shot working, too. He made 4-of-6 3-pointers and finished with game-highs of 30 points and 11 rebounds. Both teams shot 47 percent from the field, but the Warriors held a 19-9 offensive rebounding advantage.

Quotables: “It was a tough game, but besides four minutes in the first half and for a two-minute period in the second half, I thought we played well,” Smith said. “Cole did a good job of running our offense and the fact we executed well I feel was the determining factor down the stretch.”

What’s Next: Oak Hill moves to 33-4 on the season and faces unbeaten La Lumiere in Friday’s second semifinal (5 pm ET, ESPN2). La Lumiere is going to have to somewhat contain Anthony and at the same time keep Wendell Green Jr. out of foul trouble. He is the Laker’s key ball-handler and Oak Hill will have a chance at the upset if it gets good shooting from Cam Thomas and can force Green out of his game.