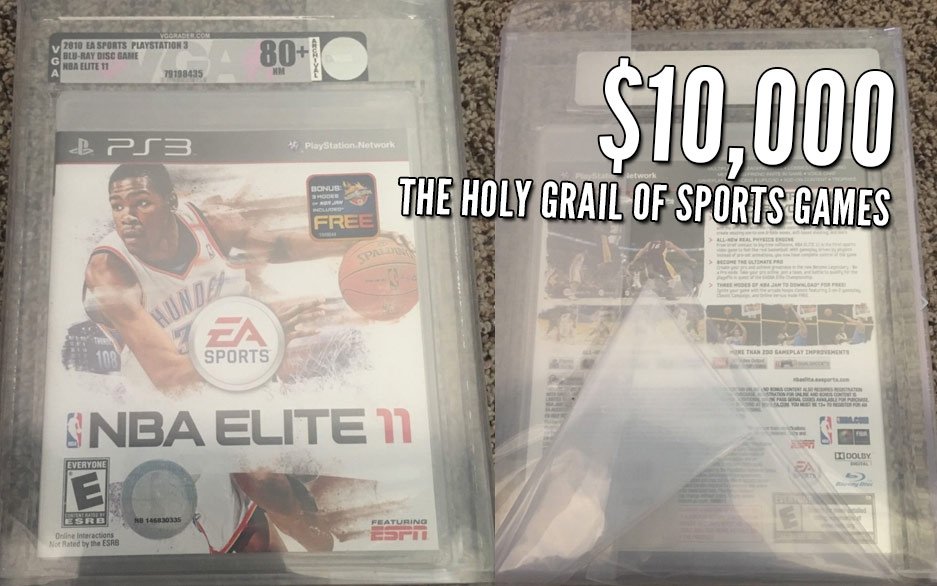 A graded authentic copy of the holy grail of sports games has finally surfaced! Ebay seller Michael_GM is selling his sealed and authenticated PS3 copy of the ultra-rare NBA Elite 11 for $10,000. It’s also for bid with a starting price of $6,500 but i’m sure there’s a reserve and my guess is it’s at least $8,000.

So why the hell is this game worth 10 grand?  The answer is because it’s so rare that an owner of a copy can ask for whatever he wants.

Over the past few years, a few copies of the game and marketing pieces have been posted and sold on Ebay. The game by itself normally sells for $2,000 – $3,000. The game with the more commonly seen Gamestop promo cover (my copy is shown below) normally sells for about $4,000 and the Gamestop cover alone will still cost you about $200. 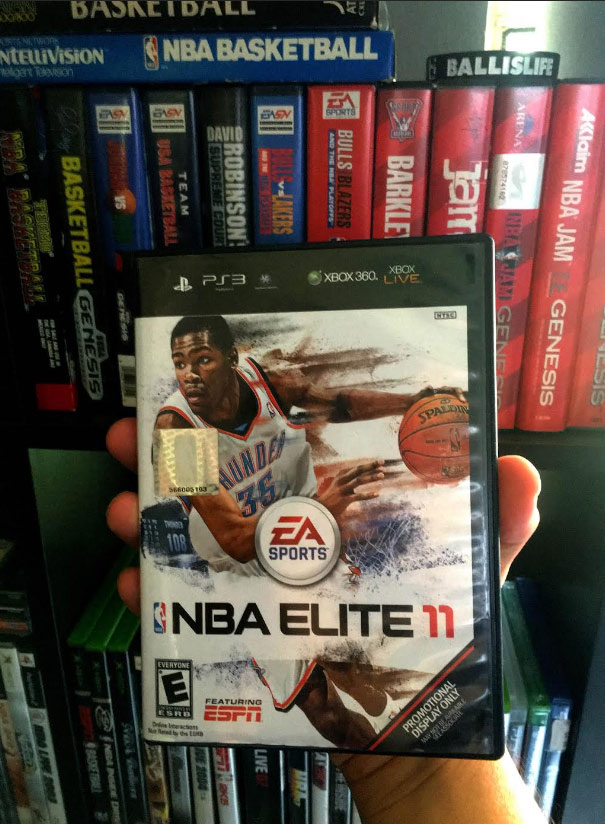 As proud as I am to have the promotional version, I’m willing to kill for a copy of the game that killed the NBA Live franchise I grew up playing.

Back in 2010, EA tried to rebrand the Live franchise and came up with NBA Elite 11 for Xbox 360 and PS3. They had Kevin Durant on the cover, Steph Curry in commercials, Brandon Jennings endorsing it, 9th Wonder producing the soundtrack with a young J.Cole, they seemed to have everything going for it. Unfortunately, they also had Jesus Bynum…. 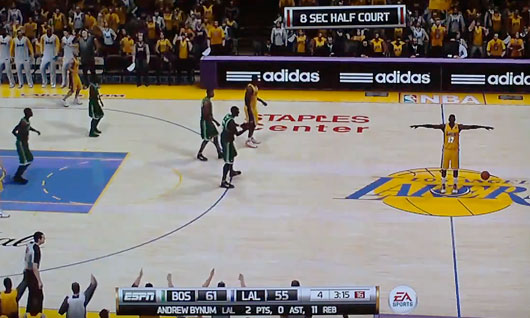 Jesus Bynum was a glitch as damaging as a real life Andrew Bynum on a NBA roster. And just like the real life Bynum, the NBA Elite version was the catalyst for viral gold, including some of the funniest gaming videos ever posted on YouTube.
“shoot the f*****g ball man s**t”

On September 27th of 2010, EA announced they were going to have to delay the game, which was supposed to be released on October 5th of 2010. Then on November 2nd of 2010, they announced the game was dead and not coming back like Jesus Bynum.

So, who is to blame for this.

In an interview with Kotaku posted on December 2, 2010, Electronic Arts CEO John Riccitiello explained the business process of how and why the game was cancelled. The story began roughly a year and a half before in mid-2009. Representatives from EA Canada came to Riccitiello with their proposal on how they would innovate on simulation basketball controls in order to more effectively compete with 2K Sports’ NBA series. They also showed off playable prototype code in which the player would have a greater degree of ball control via the right analogue stick.

Riccitiello noted in the interview that this fundamental change in gameplay was ambitious, particularly for an eighteen-month development cycle, but EA Canada promised that they would be able to deliver. Around July of 2010, EA Canada reps reported that the game would be “coming in hot,” meaning that the game’s development would be down to the wire due to the cramped development schedule, but they continued to report that the final product would be of high quality.

As far as the much-maligned demo was concerned, Riccitiello stated that it went live around the same time that the game was being mastered, or prepared for packaging and shipping. However, they also knew about a month in advance that the gameplay, while in Riccitiello’s words was “great,” didn’t sync well with the character animation. This very problem is what led to the well-publicized demo glitch of Andrew Bynum becoming frozen in center court.

In 2012, they tried to bring the franchise back with a digital-only version of NBA Live 13. Then in September of 2012, days after IGN released a glowing review of NB2k13 (“might be the best sports game of all-time”), the Executive Vice President of EA Sports announced they were once again going to kill the game.

Live did return in 2014 with Kyrie Irving and quietly followed up that game with Damian Lillard (Live 2015) and Russell Westbrook (Live 2016). Meanwhile, 2K took it to another level by bringing out new features like 2KTV (what’s up Rachel!) and MyCareer mode with famous movie directors (Spike!) and actors (Michael B. Jordan!). 2K is so big now it’s a part of pop culture and raising 2K ratings has become a goal among many NBA players. There’s also a huge community of gamers (what’s up Jezzer) making a living by just posting videos about 2K.

So what’s the latest on the Live franchise. Back in May, EA announced they will NOT be releasing another NBA Live game until 2017…

“It’s important that you know that we are committed to ‘NBA LIVE’ in the console space. While we won’t be shipping a product this Fall, we will be back on the courts with something new and exciting for you to experience in early 2017.”

Back to the copy of NBA Elite 11, if it sells via a bid, i’m expecting to see it go for about 8,000, which sounds fair and is also approximately the same number of copies EA sold of NBA Live 16 in North America.