With their first No. 1 pick since LeBron James in 2003, the Cleveland Cavaliers made the wise decision of drafting everybody’s favorite future uncle, Kyrie Irving.

“I didn’t have any doubts about going No. 1.” said Irving. “I was looking to the organization to pick who they felt was the right choice. But now to this moment, from being a fan of the NBA draft and now being drafted, it’s a special feeling in my heart and knowing that my friends and family were together, it’s a memory I’m going to remember for the rest of my life.”

Another player who will also always remember that day is Tristan Thompson, the 4th pick by the Cavs in the draft. Wait. So how did the Cavs end up with the 1st and 4th pick in the draft again? Let’s rewind.

The first pick used to pick Irving wasn’t originally a Cavs’ pick. That pick belonged to the Clippers, who sent Baron Davis (Donald Sterling’s least favorite player) & the first round pick to Cleveland in exchange for Mo Williams and Jamario Moon. The Clippers figured the value of point guard Mo Williams and getting rid of Davis’ $28 million contract would outweigh the value of whatever lottery pick they were going to end up with.

“The drill is, as always, is ‘Is the player you’re getting back more valuable than the potential you could get in the draft?'” said Clippers general manager Neil Olshey. “Our analysis at this point in February is that it was more valuable to get a 28-year-old All-Star point guard that we have for the next few years, cap flexibility to make sure we take care of business and re-sign DeAndre Jordan and have the flexibility to take care of Eric Gordon as well, as opposed to speculating on another kid that’s 19 years old with one year of college experience.

“And I’m not that high on the draft to begin with this year.”

With just a 2.8% chance, that lottery pick turned out to be the #1 pick and that “kid with one year of college experience” turned out to be Kyrie Irving. A lot of people accused the draft of being rigged but I think it was just the basketball Gods punishing the Clippers.

Davis played well in Cleveland under Coach Byron Scott but was waived using the amnesty clause after the season so the Cavs could give their #1 pick the starting position and allow Baron to find a starting job somewhere else (New York) in the league.

Here’s the best part about all of the transactions. The Cavs still have Kyrie and Tristan from the 2011 draft. Damon Jones is on the Cavs staff as a “shooting consultant” and unrestricted free agent Mo Williams is supposedly “more than interested” in returning to Cleveland. Oh, and I forgot to mention, the original #1 pick of the Cavs, LeBron James, is also back in Cleveland. 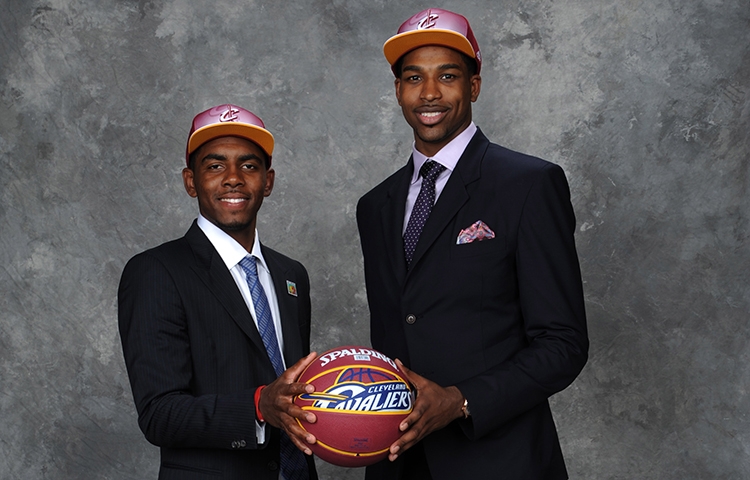 The Cavs won the NBA champion, Irving outplayed Steph Curry and played well enough to deserve a co-Finals MVP award with LeBron. He didn’t get the award but his performance in Game 5 will always be mentioned as one of the best and most exciting performances in NBA Finals history.

Also worth mentioning, if it wasn’t for all of these trades, the Clippers wouldn’t have ended up with Chris Paul.