The question to Michael Jordan was, “Who was the best defensive player you ever played against?” His answer: “Joe Dumars, he was the toughest guy for me to drive by.”

Let’s make one thing clear. No one person has ever been able to “shut down” Michael Jordan, but 4 x All-Defensive Bad Boy Joe Dumars did as good of a job as any player in NBA history at slowing him down. For years, Dumars and Detroit’s “Jordan Rules” prevented MJ from advancing in the playoffs. Three years to be exact and during those three years, MJ led the league in scoring, hit historic shots (Cavs), dominated teams like a mini-Wilt, and ended each season wondering how to get past the Pistons. Not only how to score on them but to stop players like Dumars, who actually outscored Jordan in a few games.

The Bulls figured it out in their fourth year against the Pistons during the 1991 NBA playoffs, when the Bulls swept Detroit in the ECF. The final game of the sweep is mostly known for Isiah Thomas leading his team to the locker room before the game was even over. 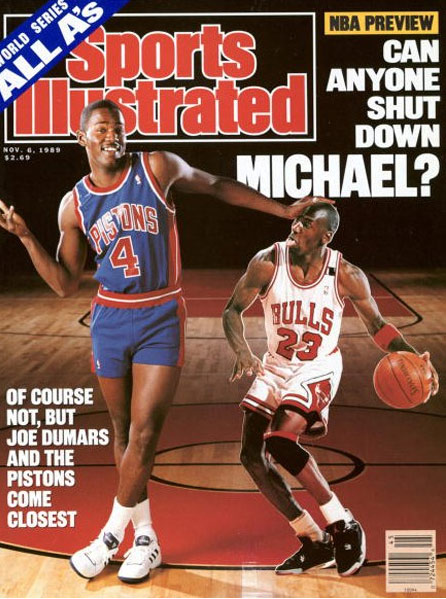