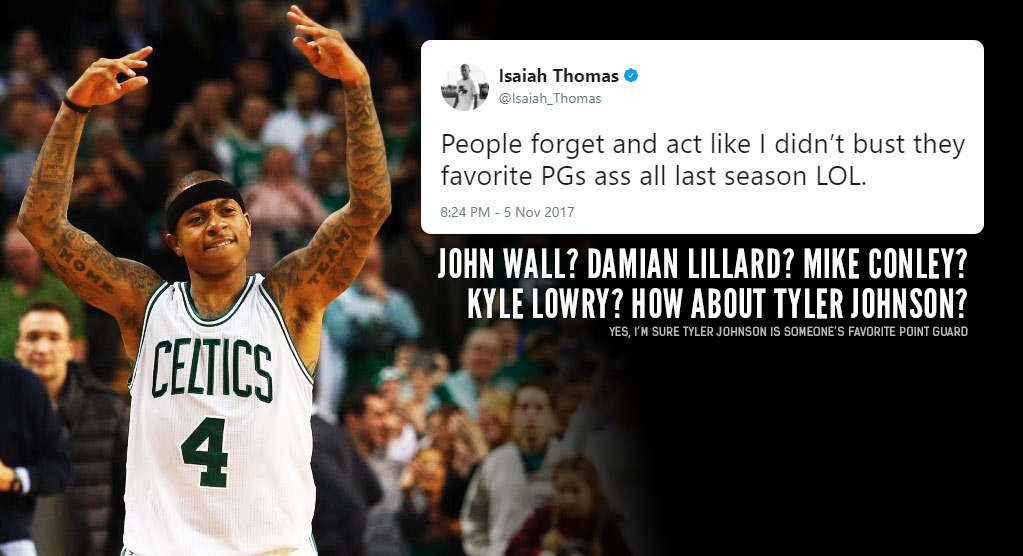 The tweet of the night goes to Cleveland Cavs’ guard (Law & Order: SVU actor) Isaiah Thomas and his “People forget and act like I didn’t bust they favorite PG’s ass all last season LOL!” post.

True! He did have some pretty exceptional “ass-busting” performances against a bunch of the league’s best and most popular point guards last season. He also got lit up by a few players, including Russell Westbrook, who had 45/11/11 in a win over the Celtics last December. I also remember Emmanuel Mudiay scoring a season-high 30 in a win against Thomas and the Celtics. But, I remember way more games of Thomas “busting ass” then getting his ass busted. So, as we wait until he makes his return in (hopefully) January or February of 2018, let’s look back at some of his best performances from last season and the point guards he might be referring to.

I’m not sure how many Tyler Johnson fans are out there but I’m sure they remember IT dropping 29 of his season-high 52 points in the 4th quarter on Johnson and the Miami Heat.

Thomas knocked down 10-of-16 shots, including 7-of-10 from three and a perfect 17-of-17 from the free throw line for 44 points against the Grit-and-Grind Grizzlies and their well-paid point guard.

Thomas had the better fantasy line with 41 points and 6 assists but Dame got the W and a lot of help from his backcourt partner, CJ McCollum (35 points).

Like Tyler Johnson, I’m not sure there’s a bunch of people running around saying RJ is their favorite point guard. If you come across one, I’m sure you can ask them about Jackson fouling out with 12 points and 6 assists as Thomas put up 41 and 8 in a Celtics win that saw Thomas go off for 24 in the final quarter.

Now, this was a “busted ass” game and it came against a player with a very big fan club (with lots of dancers from certain types of clubs). John Wall missed 17 of his 21 shots and all five of threes on his way to 9 points; Thomas had a game-high 38 points on 14-of-29 shooting, including 5 from downtown and 20 points in the 4th!

The two also had some great battles in the Eastern Conference Semi-Finals, which included the emotional and unforgettable Game 2. Wall was exceptional with 40 points and 13 assists but IT stole the show by scoring a playoff career-high 53 points and dedicating the win to his recently deceased sister. 29 of Thomas’ points came in the 4th and OT.

Dennis Schroder would like me to remind you he put up 21 points and 5 assists in a 16-point win vs the Celtics as Thomas missed 17 of his 21 shots and finished with 19 points, 7 assists and 7 turnovers.

Thomas would like to reply with this video of him scoring 13 clutch 4th points.