“Everybody knows if you are here, you got skills.”

That’s what Kevin Durant told the young hoopers attending his Nike Skills Academy in Washington D.C. back in 2014. One of those attendees was a Shaggy look-a-like from Wichita State named Ron Baker.

On December 15th of 2016, Baker celebrated Christmas early by putting up a career-high 13 points on six of seven shooting. One of those six field-goals was a 3-pointer over Kevin Durant, who responded by giving his past student a pat on the chest and back of the head.

What makes this career-high from the undrafted Knicks rookie standout so much is his 13 points was three more than any Knicks starter, five more than Steph Curry (who Baker also played great defense against) and just a layup away from tying Durant. His six field goals also equals his entire season total so far.

Before this game, the only memorable thing Baker has done in a NBA uniform was create the “Three-Scope” celebration for the Knicks bench… 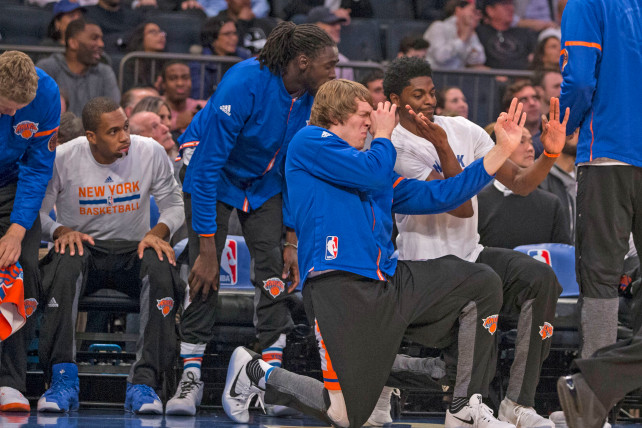 And introduce himself to Ben Stiller during a game.

When the video was shared on the NBA YouTube channel, the most popular comments were, “2K Generics are becoming real,” “Who is this Zac Efron from High School Musical looking ass nigga?” and “Ben Stiller probably wondering ‘who do fuck is this?'”

Well, the “whitest guy with the blackest name” introduced himself to a lot of people last night as his named trended on Twitter, people joked about him scoring a “Baker’s dozen” and KD gave him props two years after Baker posted this tweet.

There’s a reason why I said “the most impressive thing he’s done in a NBA uniform” earlier. It’s because earlier this year, Baker released a children’s book about being an underdog titled “You’re Too Big To Dream Small.” It’s the perfect Christmas stuffer for future hoopers and his performance last night is the type of stuff that reminds me why I love this game.

So who all is joining me on the Baker Bandwagon?

Baker’s almost flawless play last night made him New York’s favorite Knick for a night, but if this amusing moment with Derrick Rose would have caused an eye injury or a concussion then Baker would probably be spending today sending the highlights from last night and his resume to other teams.