Kostas looks alot like his older brother Milwaukee Bucks forward Giannis Antetokounmpo (long arms). While there were many skeptics in the gym during NY2LA’s Swish N Dish near Milwaukee, we spotted Kostas making some plays with his length and athleticism that nobody else in the gym could make so we’re sharing this raw footage.

Still a young, raw talent, Kostas hasn’t received any D1 college offers yet, but we expect that to change soon! 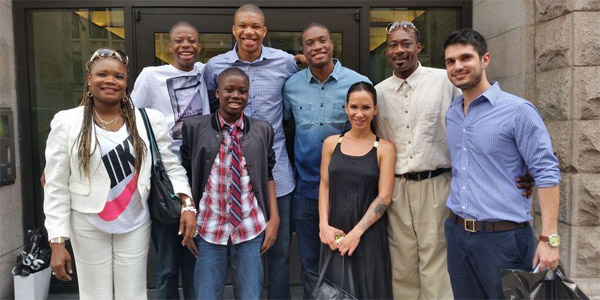 The Antetokounmpos: Parents Charles and Veronica with sons Giannis (Bucks), Thanasis (D-League/Drafted by the Knicks) and Alexis.  Also featured in the pic is friend Nicole Jovanovic and agent Tim Lotsos.