The 2015 NBPA Top 100 Camp continued on Friday morning as the camp’s top performers are beginning to emerge. We take a look at selected standouts who caught our eye over the camp’s first two and a half days, including Omari Spellman, Trae Young, Mohamed Bamba, and Xavier Simpson.

The theme of the 2015 NBPA Top 100 Camp is thinking and executing like a pro. In this camp atmosphere, where players are gaining valuable experience playing the NBA game (24-second shot clock, 12 minute quarters, etc.), those who adjust their games to be as efficient as possible are the ones excelling: quick decisions, decisive movements and thinking the game one play ahead. The elite players who get away with bad habits against lesser players are the ones struggling.

The smart players are noticing and making the adjustments necessary to excel. 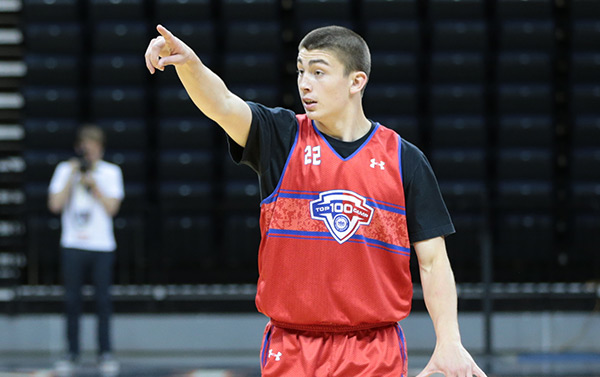 “I love the pace of the games,” said 2016 point guard Payton Pritchard of West Linn (West Linn, Ore.). “I feel like I need to work on being more efficient and making a quick decision when I get into the lane. Luckily, I can dump it inside to Udoka (Azubuike).”

In addition to Azubuike, there are a few other big men that are making their presence known down low with quality and powerful finishes. Of course, in most instances it takes a guard to feed them the ball, but Azubuike and Omari Spellman, a 6-foot-8 power forward out of MacDuffie School (Springfield, Mass.), are making their touches count.

Spellman was particularly devastating in a Friday morning game with 24 points. He was efficient around the rim (8-of-12 field goals) and made both his 3-point field goal attempts. He added seven rebounds, three blocks in three steals in arguably the most well-rounded performance of the camp so far.

Obviously statistics are not everything with regards to best performances — as the timing of plays and hitting clutch shots also factor in. One of the best clutch performances so far was turned in by 2017 point guard Trae Young of Norman (Norman, Okla.). With his team trailing late, Young made up for a turnover by nailing a 3-pointer to send the game into overtime. In the sudden death format, Young then led his team to victory by scoring off dribble penetration and finishing the play with a driving lay-up.

Young, who will take an unofficial visit to Duke on Sunday after the conclusion of the camp along with 2017 forward Michael Porter of Father Tolton (Columbia, Mo.), finished the game with a team-high 18 points. He made all five of his free throws, 3-of-6 3-pointers, and added two assists.

Below are some other standouts from the first two and a half days of the NBPA Top 100 Camp (listed alphabetically): 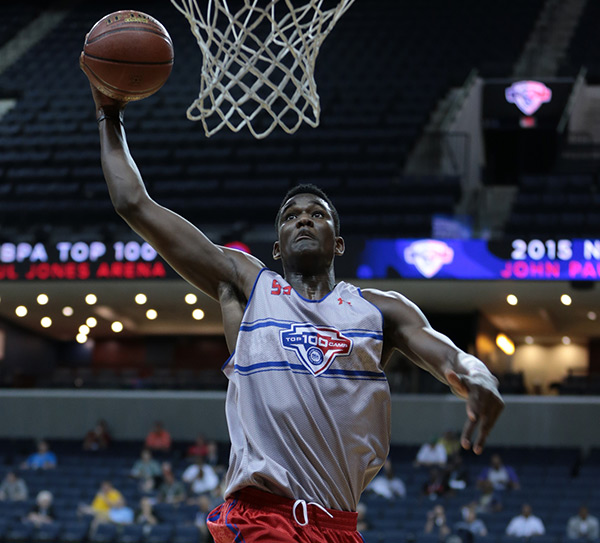 DeAndre Ayton, Balboa City School (San Diego, Calif.) 7-0 C 2017: This prodigal talent has long been considered the best prospect in the 2017 class, but the race is far from over. Ayton has had his moments here, but is spending more time facing the basket and shooting from the perimeter than dominating on the block. He is displaying a multitude of skills that are rare at his size, but Ayton must continue to work on dominating from the inside-out. At times, he shied away from challenging Udoka Azubuike while the 2016 hulk guarded him on the other end. In that game, Ayton still made 6-of-10 shots and finished with 12 points. Ayton also had a 11-point,11-rebound outing and is shooting a high percentage from the field.

Mohamed Bamba, Westtown (West Chester, Pa.) 6-10 PF 2017: When it’s all said and done, Bamba could challenge for the top spot nationally in the strong 2017 class. After his show-stopping performance at the Pangos All-American Camp earlier this month, Bamba’s impact at this camp is just as prominent. A strider in transition who covers plenty of ground, the rising junior impacts the game in every way imaginable. He even picked a few pockets defensively on the perimeter, is hedging well on ball screens and blocking shots out of his area. Comparisons to future NBA Hall of Famer Kevin Garnett are a bit premature (after all, Garnett is likely the best high school player of the 1990s), but we see him more like a young Rasheed Wallace mixed with some LaMarcus Aldridge in his game. He had a 17-point, 7-rebound performance on Thursday and started off the camp by not missing a field goal or free throw (8 points) in his team’s two-point victory. 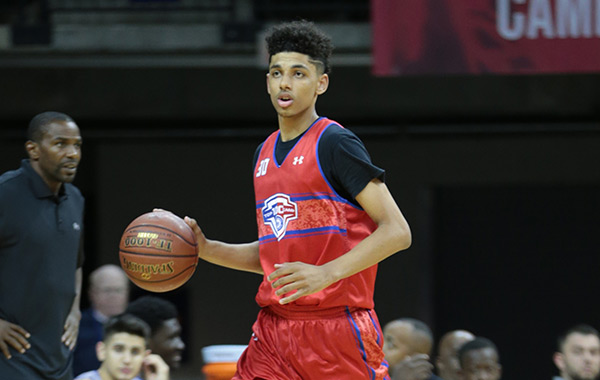 Brian Bowen, Arthur Hill (Saginaw, Mich.) 6-7 SF 2017: This smooth wing prospect has some great versatility in his scoring ability. Bowen excels in finding gaps in the defense and attacking them. He also knows how to get loose from defenders with crafty moves, although he must work on tightening up his crossover, especially when he is handling it in his left hand and attacking right towards the middle of the key. On Thursday afternoon, Bowen had a productive 13 point performance of 5-of-6 shooting from the field. 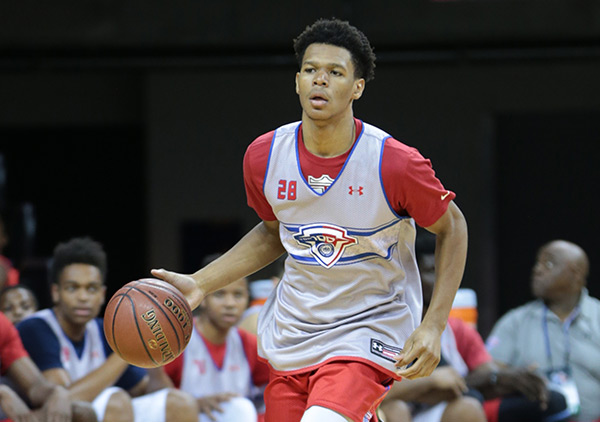 Trevon Duval, St. Benedict’s (Newark, N.J.) 6-3 SG 2017: There is a strong group of 2016 shooting guards in attendance at the NBPA Top 100 camp, including Frank Jackson of Lone Peak (Highland, Utah), Markelle Fultz of DeMatha Catholic (Hyattsville, Md.) and Kyle Guy of Lawrence Central (Indianapolis, Ind.) and Duval is in the conversation among them as having the most impact despite being a rising junior. Duval plays confidently and uses his strong upper body to absorb contact from defenders to finish plays. The Wilmington, Del. native knows what to do with the ball when he gets it into the key and is creating for teammates at a high rate. Unofficially, he leads the camp in assists so far and the We R1 standout impacts high level games in a fashion similar to former DC Premier and current Maryland guard Romello Trimble. Duval, who started off camp with a 13-point, 8-assist, 3-steal performance, reportedly will be attend another high school for the 2015-16 season.

E.J. Montgomery, Montverde Academy (Montverde, Fla.) 6-9 PF 2018: There are three rising sophomores listed on the camp roster and Montgomery had the most impact before a scary injury slowed him down on Thursday. He was a contributor to the nation’s top high school basketball team as a freshman this past season, but others elite 2018s such as Arizona’s Marvin Bagley III and California’s Jordan Brown had bigger roles on their respective teams. They made more of an impact and even though that duo has surpassed Montgomery in the eyes of many national scouts, Montgomery has a multitude of skills and here at UVA it’s evident he’ll be in the conversation as a top five national prospect in the coming months and years. The lanky forward has good instincts around the basket and displayed a solid shooting form. Towards the end of a Thursday game, he fell awkwardly and it looked like his knee buckled or leg was bent in a compromising position. After staying down for a minute, Montgomery got up on his own power and was able to put pressure on his leg and walk through the handshake line after the game. He participated in limited minutes in Friday morning games.

Shamorie Ponds, Jefferson (Brooklyn, N.Y.) 6-0 PG 2016: When a guard is limited in size, he must defend and create for teammates and Ponds foots that bill. He gets down in a stance and defends as well as any lead guard in attendance and is a crafty play-maker on the offensive end. He is conservatively, one of the top 15 overall performers so far. On Friday morning, Ponds had 12 points, including 2-of-4 3-pointers, to follow up on a 16-point, 3-steal performance on Thursday night. Earlier on Thursday, he had 17 points of 5-of-6 shooting from the field and 5-of-6 from the line. Now that’s efficient!

Xavier Simpson, Central Catholic (Lima, Ohio) 6-0 PG 2016: This combo guard, a cousin of 1992 McDonald’s All-American Greg Simpson (Ohio State/West Virginia), had one of the camp’s best statistical outings on Thursday. Playing off Thon Maker, Simpson found openings and converted them in addition to hitting the outside shot. Simpson made 11-of-13 field goal attempts, including 3-of-3 3-pointers, to finish with a game-high 25 points in his team’s 18-point win. He also had a game-high four assists while Maker finished with 22 points.