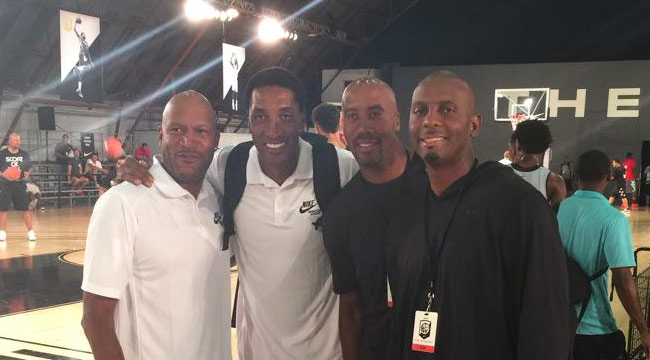 Scottie Pippen was in Cali this past weekend, along with LeBron, Durant, Penny Hardaway, Gary Payton and a few other past and present stars, for the annual Nike Basketball Academy. During a Q&A session with the Ohio Media Group, the 6’7 point-forward and former teammate of Michael Jordan had this to say about LeBron and Jordan comparisons.

Pippen must have been referring to Game 3 of the 1993 NBA Finals – I’m just kidding!

The initial reaction of most people who only want to compare players with the holy trinity of Jordan, Magic and Bird will probably shake their heads at the comments by the 6 x NBA Champion with 8 All-NBA 1st Defense honors under his belt, but LeBron’s game is more similar to Pippen than Jordan.

“I’m no slouch, but when comparing LeBron’s game, I’m usually left out,” he said. “They want to compare him to the greatest whether it be Michael Jordan or Magic Johnson, but he’s more closer to myself. It’s natural for folks to say that, but if you look at how he plays the game and how I played the game, you’ll see more similarities with us.”

So if Scottie Pippen thinks he was “LeBron before LeBron” and also thinks “LeBron would kick Jordan’s a$$,” does that mean he thinks he was as good as Jordan? I’m kidding again!

I’m sure Pippen’s comments are going to be rejected across social media today but it wont be as bad as getting rejected by a Kardashian – which also happened to Pippen this weekend.