Chino Hills (Calif.) retains its No. 1 ranking in the FAB 50 powered by Ballislife.com with a exciting 85-83 win over bubble club Foothills Christian (El Cajon, Calif.) at the Sierra Canyon Showcase. Not much movement at the top of the FAB 50 this week and only five newcomers, but the top in-season showcase of the year, the Hoophall Classic over MLK weekend, and the Bass Pro Tournament of Champions, could shake up next week’s rankings.

Every result counts and for the top-ranked teams in the FAB 50 National Team Rankings powered by Ballislife.com, margin of victory usually doesn’t help — or hurt — its rankings position. Taking on other elite teams, coaches will take a win any way they can get it.

Such was the case last week for FAB 50 No. 1 Chino Hills (Calif.). The Huskies remained unbeaten by winning their only game of the week on Saturday night versus Foothills Christian (El Cajon, Calif.) at the Sierra Canyon Showcase. In the first meeting of the season between the two clubs, Chino Hills blitzed Foothills 40-13 in the first quarter, but this time the boys from San Diego County were better prepared and got a sensational performance from UCLA-bound forward T.J. Leaf to keep the game close before falling to RUN GMZ, 85-83.

Leaf, who appeared on a single ballot in the latest Mr. Basketball USA Tracker, scored on a variety of moves around the basket, finishing with 43 points on 20-of-24 shooting from the field and 21 rebounds. Foothills Christian took a 83-82 lead on Leaf’s last basket with 13 seconds remaining, but Chino Hills regained the lead when national player of the year candidate Lonzo Ball was fouled three seconds later. Foothills Christian missed its last field goal attempt and Ball secured the rebound and accounted for the game’s final points at the free throw line. Ball, who will join Leaf at UCLA, finished with 24 points, 13 rebounds and 10 assists. (See raw footage of that game below.)

While margin of victory doesn’t help the higher ranked team, it can often help the lower ranked/bubble team and propel it into the rankings. Considering Foothills Christian lost by one basket, we considered Leaf and company for the FAB 50 this week after it fell out in the first rankings of 2016. But after carefully reviewing the Knights’ log, we decided to go with still unbeaten Wayne of Huber Heights, Ohio at No. 49 this week.

We still have Mater Dei (Santa Ana, Calif.) in front of Foothills in our California pecking order, so Mater Dei nor Foothills can be ranked in front of fellow bubble club Moeller (Cincinnati, Ohio) in our national pecking order since that team defeated Mater Dei in December. Moeller is still ranked behind Wayne, No. 31 Lima Senior (Lima, Ohio) and No. 28 Westerville South (Westerville, Ohio) in the latest Ohio Division I power poll, so Mater Dei and Foothills will need more results to go in its favor before they can jump back in the FAB 50.

The second team Mater Dei lost to — No. 8 St. John’s (Washington, D.C.) — was involved in the other top game around the country last week. It hosted No. 5 DeMatha Catholic (Hyattsville, Md.) in WCAC play and the Stags came away with a 59-57 road win. The game was close throughout and decided on a 3-pointer by DeMatha’s Ryan Allen with just under a minute remaining and the shot clock expiring. The closeness of the loss and St. John’s 75-72 overtime win earlier in the week over No. 19 Gonzaga (Washington, D.C.) keeps the Cadets at No. 8 this week.

The Martin Luther King Jr. holiday has evolved over the last 20 years as a great time to see some of the nation’s elite clubs pitted against each other. The top showcase is the Hoophall Classic January 14-18 in Springfield, Mass. Fourteen FAB 50 ranked teams will participate with five games nationally televised on ESPN networks. The games involving ranked teams include:

Oak Hill Academy, Sierra Canyon and Chaminade will participate in the 2016 Bass Pro Tournament of Champions Jan. 14-16 in Springfield, Mo. before playing Monday at the Hoophall. The field also includes No. 45 Rainier Beach (Seattle, Wash.).

Because of all the MLK showcases around the country, the next FAB 50 won’t be published until Tuesday, January 19 and will factor in MLK Monday results. 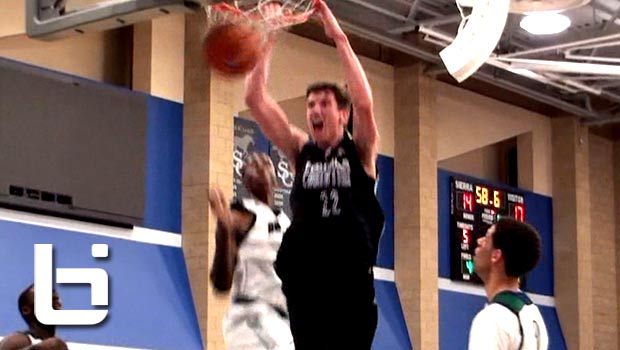