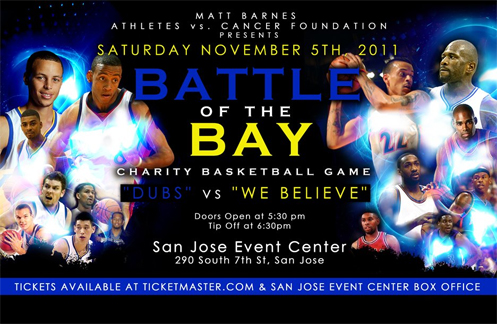 For most NBA fans, the 2011 NBA lockout was a terrible time. For us, it was one of our favorite and most important times.

Since a lot of the “out-of-work” players were itching to play some hoops, lockout games were being organized all over the US and many of them featured many of the best players in the league — from Kevin Durant to LeBron James to even Kobe Bryant.  So we packed up our cameras, bought a bunch of plane tickets, attended as many games as we could and shared with the world the basketball action they weren’t getting from the NBA.

WE BELIEVE VS DUBS GAME

One of our favorite games of the lockout was the “We Believe vs Dubs” game, which took place at San Jose State University and featured former Warriors Jason Richardson, Gilbert Arenas, Al Harrington, Corey Maggette, Antawn Jamison and CJ Watson going against current Warriors Dorell Wright, David Lee, an unknown Jeremy Lin and a not as popular Steph Curry.

One of our favorite moments from the game is when Steph Curry danced with CJ, hit a 3 and then started celebrating before being dropped to the ground by CJ.

The current Warriors won 158-153 and you can check out all the great action in the following video, including a duel between Hibachi and pre-Linsanity Jeremy Lin.