For the second consecutive week, there are two new teams in the updated FAB 50 National Team Rankings powered by Ballislife.com for the 2020-21 season. The rankings include MLK Monday results and because of that there is a new No. 2 team behind preseason No. 1 and defending FAB 50 champ Montverde Academy of Florida.

The season had a bit of normalcy, for a weekend at least, with a terrific slate of national games over MLK weekend. Normally there are games going on into the late night hours on the West Coast, but with COVID-19 numbers still high in that region, most of the attention centered on matchups involving Southeast and East region teams.

After all the dust cleared, the preseason No. 1 team in the FAB 50 National Team Rankings powered by Ballislife.com, Montverde Academy (Montverde, Fla.), remained in the pole position after running its winning streak to 40 games with victories over teams that come into this week ranked No. 3, No. 5, and No. 6, along with previous No. 12. This comes after defeating current No. 2 club Sunrise Christian Academy (Bel Aire, Kan.) the previous week at the loaded St. James NIBC Invitational in Virginia.

The Eagles closed out the second week of the St. James with a 70-59 victory over No. 6 Wasatch Academy (Mt. Pleasant, Utah) behind a dominant performance by Jalen Duren, who is developing into a legitimate Mr. Basketball USA candidate as a junior. He finished the game with 18 points, 12 rebounds, five assists and a couple of spectacular blocks. This win came on the heels of a big No. 1 vs. No. 2 showdown between Montverde Academy and IMG Academy (Bradenton, Fla.) on MLK Sunday that saw Kevin Boyle’s club come away with a 55-51 victory. Montverde Academy led the whole way, but IMG Academy remained in the hunt the entire game until a late power lay-up by Duren (10 points, 8 rebounds, 6 blocks) sealed matters.

With Montverde Academy defeating Sunrise Christian 58-52, normally we’d have to take a deep dive and figure out which team deserved to be ranked right behind the Eagles since no other team has yet proven to be on the level of the top three clubs. This week, however, that deep rankings expose wasn’t necessary as IMG Academy and Sunrise Christian locked horns on MLK Monday right before MVA took on Wasatch Academy. The No. 2 vs. No. 3 matchup took care of our “problem”, and it was the Buffaloes that overcame a 21-11 deficit after one quarter to pull out a 69-62 victory to hand IMG Academy its second loss in less than 24 hours. 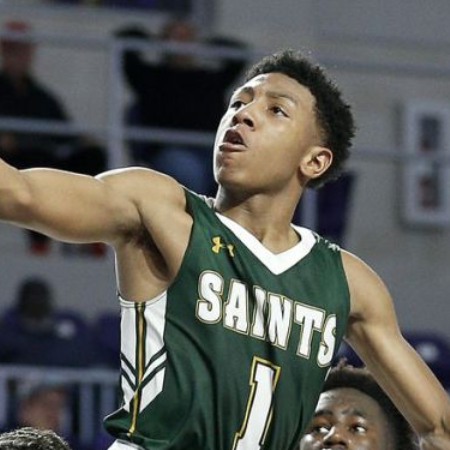 IMG Academy led 27-25 at halftime but was outscored by four points in the third period and by five points in the final stanza. The game was in the balance until Sunrise Christian’s Kennedy Chandler took over down the stretch. The point guard hit his fourth 3-pointer late to give the Buffaloes breathing room and the Tennessee-bound point guard finished with a game-high 26 points. Forward Kendall Brown, bound for Baylor, added 17 points.

The St. James NIBC Invitational provided a glimpse of what the rest of the season may look like at the top of the FAB 50 and what future seasons could look like for teams in the National Interscholastic Basketball Conference. Two teams dropped out this week: previous No. 38 Moeller (Cincinnati, Ohio) and NIBC member and previous No. 12 Legacy Early College (Greenville, S.C.).

Moeller dropped a decision to an unranked Ohio club, but what to do with Legacy Early College was a bit more tricky. The Lions lost four St. James games last week, including to unranked Bishop Walsh (Cumberland, Md.), and ended the event with five losses in a row to drop to 9-7 on the season. It’s not an easy decision on what to do with the Lions because they played tough competition each game, while there are teams ranked in the preseason still sitting at 0-0 because of COVID-19 restrictions in their respective states.

Could Legacy Early College beat some of the FAB 50 ranked teams? We wouldn’t bet against it. Do the Lions deserve to be ranked? That’s is a trickier question to answer because of their amount of losses and no owning a win over a current ranked club. If they didn’t lose to Bishop Walsh (only the one win vs. NIBC clubs), Legacy Early would still be ranked, albeit no where close to No. 12. We’d bet the Lions will re-appear in the rankings in future weeks, as they’ll have plenty of opportunity to knock off ranked clubs.

What to do with Legacy Early shined light on the notion of just how much COVID-19 is still affecting the FAB 50. In corresponding with coaches around the country, many state associations have banned travel and showcases for this season. Some teams just won’t have their normal opportunities to beat ranked clubs, or upset higher ranked FAB 50 teams. Many teams will have gaudy records entering the post-season and we’ll have to gauge just how many teams that have multiple losses deserve to crack the rankings over teams that play much weaker schedules. The S.O.S. vs. unbeaten or one-loss clubs will be a closely watched rankings factor this season. It’s never easy to sort out, but this season COVID-19 is making it much tougher.

This special MLK edition of the FAB 50 is dedicated to the memory of John Rhodes, the executive director of the Beach Ball Classic and former Mayor of Myrtle Beach, South Carolina. Rhodes, who was involved with the holiday tournament since its inception in 1980, passed on January 17 due to COVID-19 complications.

Martin Luther King Jr. weekend is a celebration of service to others and our country and Rhodes was a shining example of serving our country’s youth. The post-Christmas tournament he ran was one of the first to consistently draw nationally ranked teams, and countless future NBA players. More importantly, the Beach Ball Classic offers countless young men the opportunity to experience another part of the country they normally would never see if it wasn’t for basketball. Every high school coach we’ve ever spoken to about the event has raved about its hospitality and that’s a reflection of Rhodes.

“I’m truly saddened by John’s passing,” said Donnie Wilkie, the event director of the City of Palms Classic in Ft. Myers, Fla. “He was a good friend, and his energy and passion for the Beach Ball Classic, honestly, was the biggest reason why it was the classiest tournament in the nation for so many years.”

According to Chris Lawlor, a long-time national rankings compiler, Rhodes started off as an event sponsor who was added to the tournament committee in 1980-81. What fans today see at events such as City of Palms, GEICO Nationals and most recently the St. James NIBC Invitational has roots from the Beach Ball Classic. Since the FAB 50’s first season in 1987-88, that tournament has been a major factor in the rankings and Rhodes will be missed by many.

Rhodes is survived by his wife Terri Springs.