It will be upstart Team Charlotte taking on Thon Maker and his teammates at Canada Elite for the 17U UAA championship on Saturday evening to complete the shoe-oriented championships for the 2015 grassroots season. The Under Armour Association will crown a new champion in 17U after defending champion We R1 was knocked out in the quarterfinals by D.C. Premier, which fell to Team Charlotte in the semifinals. Canada Elite advanced to the title game with a big win over a talented MWA Elite club on Friday night. Read below for full analysis!

Motivation can come in many different forms and for 7-foot Thon Maker it was two-fold on Saturday. The international high school and grassroots basketball star was motivated to help Canada Elite advance to the Under Armour Association Finals 17U championship game. He was also to eager to silence recent social media mentions that he may have been outplayed by fellow 2016 elite Josh Jackson of 1 Nation and by an upstart — Earl Watson Elite’s Jayce Johnson — during earlier UAA games.

Maker’s Canada Elite team lost to EWE 67-57 in a showcase game on Thursday in which Maker went for 11 points and nine rebounds. He didn’t play bad against Johnson, but did step it up with 25 points and 11 rebounds in a 69-57 win over Jackson’s 1 Nation team. Based on tweets and reports, however, you would think Maker didn’t come to play.

Nothing silences critics and doubters more than winning and playing hard and that’s exactly what Maker did on Friday in leading his team to Saturday’s 6pm ET 17U title game. Maker was relentless on the glass against MWA Elite’s big and powerful frontline and willed his team to a 59-52 semifinal victory. The most talked-about big man in the national 2016 class finished with 16 points and was credited with 10 rebounds. Battling the likes of MWA Elite’s Jordy Tshimanga (6-10), Billy Preston (6-9) and powerful Mark Vital (6-6), it seemed as if Maker had double that amount of rebounds. It’s probably because he came with with so many second-effort caroms that resulted in getting fouled or with a field goal attempt for a teammate.

A player who stepped up big-time for Canada Elite in Friday semifinals contest was 6-foot-2 guard Marcus Ottey of St. Benedict’s (Newark, N.J.). Ottey is an uncommitted 2016 prospect, but expect his offer count to grow after this NCAA viewing period as he is quick with the ball and explosive in the open court. With the game tied at 42-42 with just under seven minutes remaining, Ottey sparked a 12-0 run with two monster breakaway dunks (SEE VIDEO BELOW) to help put the Dallas, Texas based MWA team away. 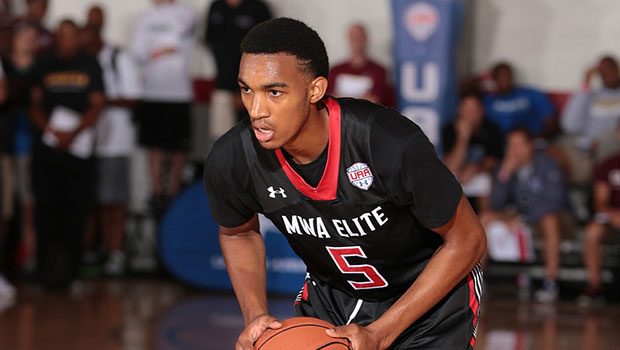 Terrence Ferguson, a 6-foot-6 wing out of Prime Prep (Dallas, Texas), led MWA Elite with 21 points. His point total was created exclusively off 3-pointers, as he hit 7-of-13 from long range. Preston, also out of Prime Prep, is fighting to claim one of the top five spots in credible national ranking lists for 2017, but he’ll have to bounce back from a 3-point, 1-field goal performance in front of a packed house of national media and college coaches.

Maker, who announced his intentions to remain in high school for the entire 2015-16 school year at the NBPA Top 100 Camp in June, had team-highs of 14 points and 11 rebounds in the 57-45 quarterfinal win over Team Breakdown.

Team Charlotte prides itself on team ball and overcoming its perceived lack of star power and will enter Saturday night’s championship game riding a wave of emotion after two thrilling victories on Friday. Still, the upstart finalist will have to try to find a way of slowing down Maker with only one player taller than 6-foot-6 on its roster.

Team Charlotte knocked off D.C. Premier 60-57, in overtime, late Friday night. Guard Ty-Shon Alexander has been impressive at the UAA Finals and was at it again versus D.C. Premier’s quick backcourt. The 6-foot-3 shooting guard, a rising junior at Oak Hill Academy (Mouth of Wilson, Va.), finished with 19 points and three assists. Alexander, who is a good elbow shooter and a relentless attacker of the basket, had 14 points and six rebounds in a 55-46 quarterfinal victory over Atlanta Express. 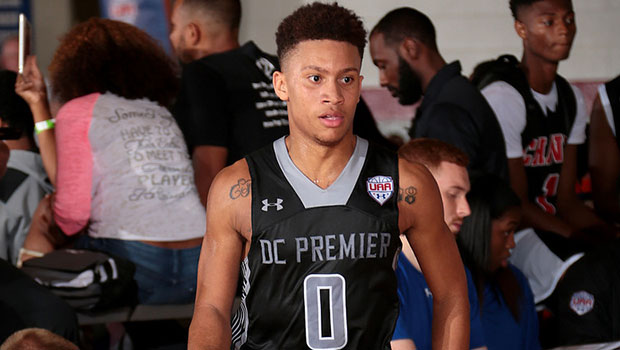 D.C. Premier got 19 points and six rebounds from 5-foot-9 2016 guard Alani Moore of Montrose Christian (Rockville, Md.) versus Team Charlotte and 10 points from 5-foot-11 2016 guard Cameron Robinson. The Evangel Christian (Dale City, Va.) product hit one of the biggest shots on the UAA circuit this year when he nailed a 17-foot jumper just inside the arch with 18 seconds remaining to propel D.C. Premier to a 50-49 quarterfinal win over WE R1.

WE R1, led by the sensational 2017 backcourt of Trevon Duval and Quade Green, was the defending 17U UAA champion. Robinson also finished that game with 10 points.

“That play was ran for me (coming off that screen) and it’s something we run everyday in practice,” Robinson said. “I’ve hit that shot a million times in my life.”

Hoosier Hysteria in 16U

The Indy Hoosiers won the inaugural 15U UA Association title in 2014 and are one win away from another crown. They have been just as impressive on the UAA 16U circuit, advancing to Saturday’s championship game with a 73-64 overtime win over Earl Watson Elite out of Southern California.

It’s hard to imagine there is a more impressive 1-2 punch on any 16U circuit than 6-foot-3 power point guard Paul Scruggs and 6-foot-8 small forward Kris Wilkes. EWE didn’t have an answer for the duo, as Wilkes went for 27 points with Scruggs netting 17.

Wilkes, a 2017 out of North Central (Indianapolis, Ind.), has a lot of offensive ability on the wing, around the basket and in transition. He’s also a capable defender. Scruggs, a 2017 out of Southport (Indianapolis, Ind.), has a nice combination of athleticism and toughness from the point guard position. His IQ also allows him to take advantage inside against smaller defenders.

The Indy Hoosiers will take on the Florida Vipers, a first year outfit that advanced to the championship game courtesy of a 65-63 win over Team Thad (Tenn.). Zackary Scott, a 6-foot-3 2017 guard out of Westminster Christian (Miami, Fla.), led three double digit Vipers’ scorers with 17 points.

There is an abundance of talent in the UAA 15U division, so there will be interested college coaches in Saturday afternoon’s title contest between Sports U out of Fairfield, N.J. versus We R1 out of Delaware.

Sports U is led by Naz Reid, one of the top 2018 prospect in the country out of Roselle Catholic (Roselle, N.J.). The 6-foot-9 power forward went for 22 points in a 50-41 semifinal win over a tall and talented KC Run GMC group.

We R1 does have some size, but its scoring strength is in the backcourt. It advanced to the final with a 57-46 win over Atlanta Express. Darius Kinnel, a 5-foot-9 2018 prospect out of Highland Regional (Blackwood, N.J.) had 20 points in the semifinals. He made five 3-pointers in the first half and finished the game with six. Kiyon Johnson, a 6-foot-4 2018 small forward out of Paul VI (Haddonfield, N.J.), is another talent to track on We R1.