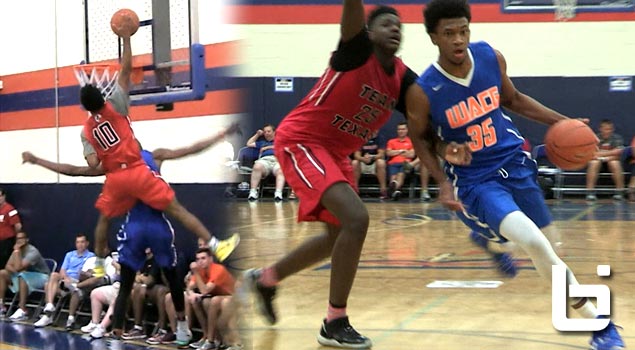 Marvin Bagley, a rising sophomore playing at the Las Vegas Fab 48 for We Can Go All-Stars 2018 (Tenn.) and last season’s national freshman of the year at Corona Del Sol (Tempe, Ariz.), led his team into the 16U Invitational quarterfinals with a performance for the ages in a win over Team Texas.

For talent evaluators that have covered grassroots and high school basketball for a long period — for arguments purposes let’s say since the turn of the century — blanket statements and all-time comparisons are not easily tossed around .

However, after his performance in We Can Go All-Stars 2018’s (Tenn.) 80-77 second round victory over Team Texas, 6-foot-10 Marvin Bagley III had scouts and college coaches shaking their heads in disbelief about his ability and scratching their heads trying to remember the last time they’ve seen such a performance from a rising sophomore.

Bagley finished with 28 points, including three 3-pointers, 14 rebounds, four blocks, and two assists. Many of the points were highlight dunks and finishes. He also hit a big 3-pointer down the stretch to keep Team Texas at bay.

It looked like the We Can Go All-Stars 2018 was going to pull away after taking on 69-53 on the third on three consecutive alley-oop dunk finishes by the consensus No. 1 player in the national 2018 class.

The 6-foot, 172-pound rising junior guard simply willed his team back into the game with relentless drives and finishes at the rim. Roberts finished a couple of conventional 3-point plays, had a monster flush and a dunk attempt over 6-foot-10 rising freshman Francis Okoro that had the Bishop Gorman High School auxiliary gym buzzing. Even the normally stoic college coaches visibly enjoyed the show.

In fact, it will be the only game all summer in which the college coaches on hand wouldn’t have mind if it had went to overtime. The game wasn’t decided until Roberts missed a desperation 3-pointer at the buzzer. Roberts finished with 31 points.

Hoop Scoop’s Clark Francis, who has covered the national Grassroots scene since 1983, feels Bagley’s Saturday night performance might have been the best one he’s ever seen from a rising sophomore.

We are not sure where we’d rank Bagley’s performance among the all-time best we’ve seen from an underclassman, but for now we’re just going to attempt to let you enjoy it as much as we did.