Victor Bailey Jr. of MWA Elite is of literally hundreds of high school-aged athletes trying to play his way into a college scholarship. Bailey is not a sure-fire NBA-type player, but is definitely good enough to have his college education paid for. There are many in the same boat as him, so we decided to give fans of the high school and travel basketball scene some insight into the mindset of an everyday player who participates in major grassroots basketball events. 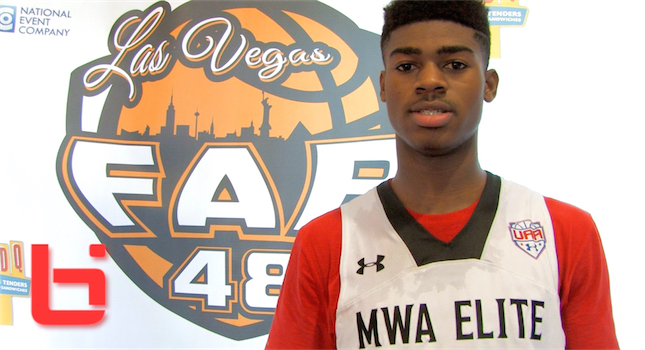 Travel basketball has been around a lot longer than the average basketball fan thinks. When teams were first formed in the 1970s and early 1980s, there was one or two teams per each large geographic region such as a county or small state. In other words, kids really had to be highly-regarded to earn a spot on a team. There wasn’t a lot of media attention and some of the best high-level, high school games ever seen were played in front of only a handful of fans and a small number of scouts.

Today, the travel ball scene is totally different. There is an endless number of teams — and we mean that in the literal sense. If the parents of a young player are not happy with their son’s situation, they might form their own team and enter it in NCAA-sanctioned events. More often than not, the son is one of the featured players on the team. “Daddyball,” as the phenomenon is coined, runs rampant in tournaments across the country and is especially scoffed at by basketball scouts and writers when the featured player is not a legitimate, high level college basketball prospect.

Thousands of players hit Las Vegas every year for the final July NCAA recruiting period with hopes of catching the eye of college coaches. Realistically, only a handful will eventually play in the NBA although thousands harbor that dream. Many didn’t play in front of a single college coach the entire five-day period; then there is the large crop whose play determined at what level colleges will seriously recruit them.

Meet Victor Bailey Jr., a junior-to-be at McNeil (Austin, Texas) who plays for Mo Williams Academy Elite. He falls into the latter category — and for him it can doubly tough to stand out because he plays for one of the most talent-laden 17U grassroots teams in the country.

To give some perspective on the competition numbers Bailey and the other college hopefuls face, MWA Elite is participating in the Las Vegas Fab 48, one of the three concurrent tournaments running throughout Sin City July 22-26. The Las Vegas Fab 48 alone hosted 475 teams in the high school portion of its tournament with five different championship brackets in 17U ball, not to mention its 16U and 15U brackets.

Bailey could join a lesser team and perhaps score more points, but in this exclusive BIL video he talks about maintaining the proper balance between playing his game and doing what is necessary for a team that advanced to the Fab 48 17U Invitational division semifinals. Bailey also talks about what he brings to a team with three or four high level college recruits with realistic NBA aspirations and coming off the beach as a sixth man, as opposed to starring for his high school team.

THE LINE ON VICTOR BAILEY

MWA Elite’s sixth man is a 6-foot-4 slashing guard who is always around the action when he doesn’t have the ball in his hands. Although he’s not a lead guard in the true sense of the term, Bailey has good vision and is always looking for the throw ahead pass.

Bailey’s left-handed shooting stroke is not consistent yet, but he’s a good enough all-around player to be ranked No. 32 in the 2017 class by ESPN.com and No. 56 by Rivals.com. He’s holds an offer from Missouri and is getting interest from high major schools and Harvard. Ultimately, his development over the next calendar year will decide the right fit for him on the next level.

Bailey is a pesky defender and loves to knock down long passes. That shouldn’t be surprising considering his football background. After leading at halftime 49-37, Bailey’s energy helped MWA Elite open up a 20-point lead en route to a 106-76 victory over Louisiana Elite in the invitational division opening round of the Las Vegas Fab 48. Bailey finished the game with 16 points. He played four minutes in the first half, but got the second half start and played the first three minutes and the last nine.

Bailey, the son of Victor Sr. and Tonja, first played basketball in fourth grade and joined his first travel ball team in seventh grade. He carries a 3.5 GPA and his goal is to play four years of collegiate basketball — and if the opportunity allows itself to play pro ball.