In less than 24 hours, former Florida Gator Teddy Dupay will attempt to break 7 basketball world records within 48 hours. One of those records will require him to make 10,382 3-pointers within a 24 hour period!  Easy enough right? To break the 3 year old record set by Dan Loriaux, Teddy just needs to average a little more than 7 3-pointers per minute.

“Anything is possible,” Dupay said to Gainesville.com. “I’ve been training. I’m in great shape. I’m in the gym every day. I’m definitely prepared and somebody else did it so you don’t say it’s impossible. This is something where I’m going to have to shoot roughly 80 percent from the 3-point line for 24 hours to break the record and so we will see.”

But 7 3-pointers in a minute for an entire day?

“I made 40 three-point shots in a minute while in college,” Dupay said to Gatorcountry.com. “During some highly competitive shooting contests with Mike Miller.”

As impossible as this all sounds, I believe Dupay will break the record at The Dream Center in Tampa tomorrow. Before I tell you why he will, i’ll tell you why he’s doing this.

3’s For Kids was created to benefit a local Academy Prep Center and the Dream Center where the record-breaking event will take place. Everybody from former coach Billy Donovan to former Miami Dolphin Jason Taylor have pledged money and even Dicky V gave Dupay’s effort an endorsement.

“We are excited to be doing this for Academy Prep Education Center in Tampa and St. Petersburg. — an incredible, rigorous middle school for inner-city kids that helps put and keep them on the right path,” said Dupay. “The school really sets itself apart with amazing faculty, curriculum and enrichment programs. But to me, most impressive is the eight years of on-going graduate support provided through high school and college. The program helps with things we take for granted — books, application fees, travel costs to come home. ”

THE WILT CHAMBERLAIN OF SHOOTERS

So why will Dupay – who I have been calling the “Wilt Chamberlain of Shooters” and “The Best HS Scorer You Never Heard Of” for the past 2o years – break the record? Ask anyone who followed basketball and lived around the Orlando area in the mid 90s and they can give you a reason or two or three.  You can even ask Rick Pitino who called one of Teddy’s high school performances “the best shooting performance I’ve ever seen.”

Here’s my story: I was attending Florida State University at the time Teddy was putting up Wilt like numbers and leading the nation in scoring with a 41.5 average. Everyday I would pick up a copy of local Orlando Sentinel newspaper hoping for an article about Shaq & Penny dominating the NBA and Teddy dominating his competition: 29 points in the last 4 and half minutes of a game, 50 points at half-time in another game, 70 points in 3 quarters in another!  The numbers were so mind boggling at times I thought I was reading a typo: 13 3-pointers in 32 minutes?

But this was 2 decades ago. “Teddy Trigger” is 36 now. How could he possibly handle this marathon of shooting? Last summer, he put up 29 points and hit 5 3-pointers in the Orlando Pro-Am where highlights of Jason Williams and Austin Rivers go viral. He also put up this POV video of him showing off the stroke that’s going to help put a lot of smiles on a lot of faces tomorrow in Tampa, Florida.

Teddy Dupay’s world-record 3-point shooting event, benefiting Academy Prep, will be held at the Dream Center of Tampa, 2806 N. 15th St. Donations can be made through GoFundMe.com/threesforkids or ThreesForKids.com. 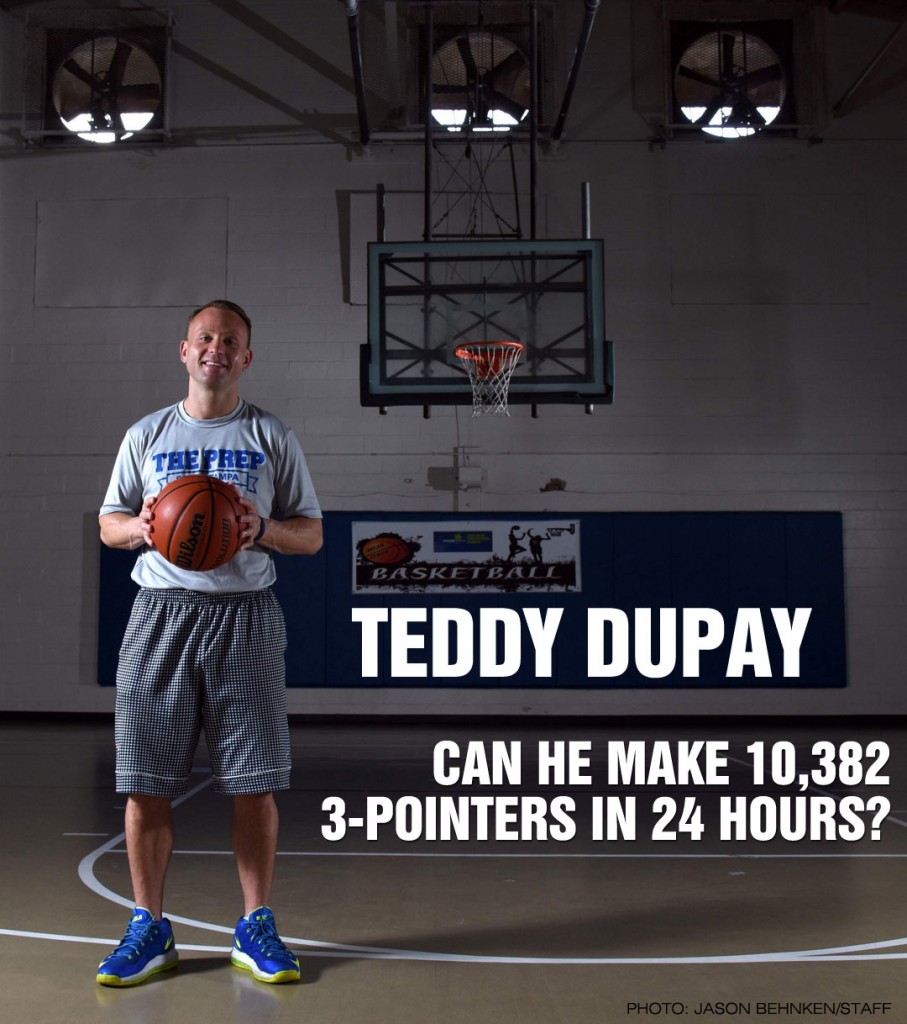